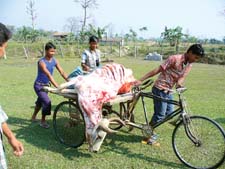 One doesn't really expect carrion scavengers to be gastronomes. So, a restaurant for vultures does seem something of an oddball. But the vulture restaurant at Kawasoti, Nawalaparasi district, some 100 km from Kathmandu, provides vultures with something that's become a rarity for them: carcasses cleaned of diclofenac residues.

Environmentalists say that the anti-inflammatory drug administered to livestock is responsible for the near extinction of three vulture species in Nepal, India and Pakistan. At the Kawasoti restaurant, all traces of the drug are removed before carcasses are served to vultures. The endeavour is the brainchild of Nepali ornithologist, Hem Sagar Baral and his team at Bird Conservation Nepal (bcn). It's part of a larger anti-diclofenac campaign (see box: Vulture saviours).

The restaurant's management committee buys old and weak cattle, and nurses them in a farm till they die. If an animal falls ill, it's treated with meloxicam, a newly introduced diclofenac substitute that does not harm vultures. If a cow dies before all traces of diclofenac-residue are removed, Baral's team makes sure that its carcass is not dished out. Dead livestock is skinned before being served.

The restaurant is actually in an open field, and Baral's winged customers are always on the lookout for a rickshaw laden with their meal. "When ever they see the rickshaw, they converge on the field where we put those carcasses," the ornithologist says. "Around 100 vultures of several species have visited our restaurant in Kawasoti," he says.
Baral's fellow ornithologist, Rajendra Narshing Suwal, likens the restaurant to the old Nepali Hindu practice of leaving old and dying cows in the gaucharan (traditional pasture lands). "As cow worshippers, Hindus were not allowed to kill the animals. So, they used to leave old and dying cows in gaucharan to die peacefully. The practice used to be good for the vultures."

This tradition is on the wane today. "The tradition of keeping a large number of cows for religious purposes is vanishing," says environmentalist Mukesh Kumar Chalise. "People in Nepal's terai region today sell old and dying cows to Indian traders, who smuggle it to neighbouring West Bengal. This creates a food shortage for vultures," Baral agrees. "We can keep 80 cows in our farm but we have not been able to find more than 21 in the recent past," he says. Some environmentalists also doubt the sustainability of his endeavour.

The ornithologist, however, exudes confidence. "We earn Rs 200 from each cowhide. We also produce compost, which is becoming popular among local people. We are planning to build a watch tower and a visitor centre, which will generate some funds to sustain our restaurant," he says.

Baral has plans for more vulture restaurants. "We will open restaurants near Bardiya National Park, Suklaphanta Wildlife Reserve and in Dang district," he says.