But, thankfully, the trends are changing.


Water consumption has come down significantly in large-scale Indian paper mills. In 1998, on an average, these consumed 200 tonnes of water to produce one tonne of paper; this reduced, by 2002, to 135 tonne per tonne paper. Even so, a very high level, considering that the average in US and European mills is less than 50 tonnes.

The least water consuming plant in India is BILT Graphics, which uses as little as 25 tonnes of water for each tonne of its product. But since this is a non-integrated paper mill -- one that buys all its pulp to make paper -- its consumption, low as it is, should be five times lower. In other words, this plant should be a closed water loop plant, one that does not discharge any effluent.

The water-tech tradeoff
The Indian pulp and paper industry uses dirty and old technology, arguing that it operates in a poor country. But it fails to take into account the real costs of such posturing.

In such a scenario, it is imperative that industry go for the water-tech trade-off: even as the paper-producing process becomes cleaner, it will become more water-efficient.


The current pollution regulations are weak and often meaningless. Either regulations do not exist or if they do, they are not designed carefully enough. All in all, it means that even if a mill was to meet the current Indian regulatory standards for pollution, it would not be sufficient to protect the environment. Take the following instances: 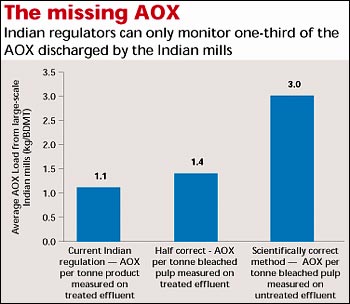 The use of elemental chlorine and chlorine compounds to bleach paper generates toxic organochlorines, collectively known as 'adsorbable organic halides' or AOX. Around 10 per cent of atomic chlorine in chlorine compounds is released as AOX. Over 300 compounds have been identified including highly toxic dioxins, furans, chlorinated phenols, acids, benzene. These identified compounds account for less than 10 per cent of all organochlorines in the effluents; the majority remains unknown. These are toxic and do not break down easily in nature. As a result, regulators across the world are setting tough standards to monitor AOX.

But in India, regulation remains both lax and unscientific.

The AOX standard here is 2 kg per tonne of product, 3-25 times higher than the global best. AOX is released mainly from the bleaching operation of the plant and should be monitored in terms of bleached pulp produced by the mill, and not the paper produced. In other words, a mill using wastepaper or market pulp or unbleached pulp -- or using higher amount of fillers -- during papermaking will have significantly higher paper production than the paper it could have produced from the bleached pulp. In other words, such a mill can easily meet the AOX standard by merely increasing its paper production and without making any improvements in the bleach plant.

Worse, in Indian mills, AOX is measured in treated effluent. But it is well known that AOX gets transferred and removed in the sludge of the effluent treatment plant, and that AOX in treated wastewater is always lower than that in the untreated wastewater. But Indian regulators do not measure AOX in the untreated effluent. Nor have they set any standard for ETP sludge. The result: the current AOX standard can only account for one third of the AOX the mills actually discharge. 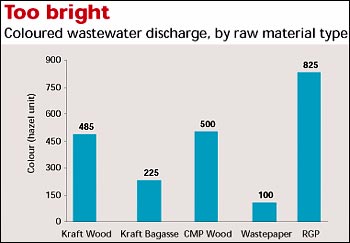 The discharge of coloured wastewater is a major cause of conflict between local communities and paper mills. In the paper industry, overall, colour is mostly an aesthetic pollution problem. But it does obstruct sunlight and this affects the aquatic food chain.

The colour of the pulp and paper mill's wastewater comes from lignin in the raw materials. Therefore, till the time Indian mills continue to use chlorine-based bleaching methods, the only option to remove colour is to use activated carbon and membrane filtration technology, which is expensive.

But as yet, there is no regulation for colour at a central level, which would provide the impluse for proper technology choices. Only the Andhra Pradesh state pollution board has set a standard for colour discharge.


Indian mills prefer to discharge their wastewater on land. A good idea, but done for the wrong reasons in a wrong way. The use of sewage and industrial effluent for irrigation has a long history. Soil can act as a biochemical reactor in treating wastewater. It also means that water can be reused -- a fact that needs to be promoted, but carefully, to ensure that the use of effluent water does not destroy the land.

The fact is that there is nothing wrong in promoting the reuse of partially treated wastewater for irrigation, provided that regulations are carefully designed for usage on land, which is a media different from water. Therefore, given that most Indian mills still use elemental chlorine for bleaching, neither the government nor the companies have considered the impact of organochlorines on the quality of agricultural produce.

Also, if industry is to be given options to reduce their costs of effluent treatment by allowing a reuse of partially treated effluents, they will be forced to clean the quality of effluent in the plant itself.