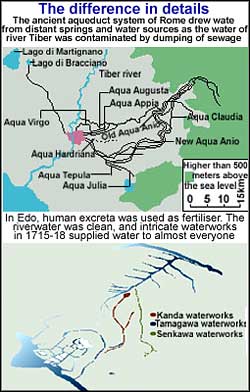 About 400 years ago, there was a city in Japan called Edo. Most of its one million people got clean water supplied close to their houses. Human excreta was not dumped into the river. It was used as agricultural fertiliser. The common people had a say in water management, which was based on economy and cost-effectiveness. The rivers were clean....

About 2,300 years ago, there was a city to which all the roads led. The sewers of Rome, however, led to the Tiber river. Its water was unclean. Huge aqueducts -- the money for which came from plunder of other countries -- fetched water from distant springs. Water was supplied to tanks, from where slaves had to fetch it for the rich. Most of the water was reserved for the rich and the powerful....

How do you provide water and sanitation to a city with one million people without exploiting your rivers and water sources, without putting filth into them? Not an easy question, by any means. If there were any easy answers, the state of rivers across the world would have been much better than it is today. Even rivers with a sacred religious status, like what the Ganga means to Hindus, have been polluted to an unimaginable degree.

Human evolution, scientific awakening and industrial revolution notwithstanding, we still do not have sensible ways to handle sewage. We callously ease it into the rivers, looking the other way. As for the availability of clean water, you do not need an expert to tell you that it is a luxury for the moneyed and the powerful in many parts of the world.

So, if any human society at any stage in history managed to achieve a sustainable give-and-take equilibrium with a river, it is essential to take a close, hard look at it. There is a fascinating example, but it calls for a trip back in time. Actually, two different trips into the past, separated by 2,000 years.

The first, a more recent one -- about 400 years back in time -- is towards the Orient, to the city of Edo in Japan, out of which has grown what we call Tokyo. The other is in the Occident, is much older, and is called just what it was called then: Rome.

Edo was an impoverished village at the beginning of the 17th century. By the end of the 17th century it grew into the largest city in the world, comparable in size and population to Rome at the peak of its prosperity. Both the cities had waterworks to cater to the one million people that they harboured. But our story is not about the similarities. Rather the differences between the two.

For one, the waterworks of Edo were more egalitarian, more hygienic than the Roman water management systems. The reason: Edo society was based on the community, especially strong families. Although the samurai were also martial, the community had a much greater say in governance, while the Roman society was military in essence.
Despite the elaborate network of water systems -- there were 578 km of massive stone conduits or aqueducts -- the Romans were unable to supply water to most citizens. Not because of water shortage due unequal distribution. The aqueduct could provide 500 litres per person per day, but there were only 1,352 water tanks and fountains in the entire city. This is negligible when you learn that there were 3,612 tanks in the northeastern section of Edo itself, which was supplied water through the Kanda waterworks system (see maps: The difference in details ).

In ancient Rome, piping of water to individual household was prohibited until about the beginning of the Christian era as construction and maintenance work could not keep pace with the growing population. Servants had to do the hard work to fetch water -- 17 per cent of the entire supply of water was provided to the emperor, 24 per cent to the officials, 39 per cent went to rich families and industry, and a mere 13 per cent was allocated to ordinary citizens. However, in Edo, the first city in Japan to have a drinking water supply system, the approach was different. Water was supplied to nearly all the residents of the densely populated downtown and to 70 per cent of the people of greater Edo. Moreover, the city coped quite well with the rapid urban growth and increase in population. What was the difference in technology used by the two cities?
A network of underground wooden pipes branching through much of Edo was the highlight of the technology at the core of its waterworks. The construction was done with such care that even the main pipes were not exposed.

While Roman waterworks did not provide for irrigation, Edo's systems provided water for irrigation, development of new agricultural land and even fire prevention. The Edo waterworks grew in stages. The construction of Edo's first water supply system began in 1590. Later, it expanded. In 1630 it came under the Kanda waterworks. The water was mainly drawn from the Tama river, flowing along the western suburb of the city. The decentralised nature of Edo waterworks did not mean that they were unsustainable and short-term. In fact, the opposite was true. Their durability can be judged by the fact that it served the city for 300 years and was operational till 1901.

Another interesting contrast is the development of water supply technology with regard to war and peace. While ancient Roman waterworks were a display of the military prowess of the Roman empire, the people of Edo used military engineering in developing domestic water supply systems. Water was often used in the warfare that went on for about 100 years prior to the Edo period, which lasted from 1603 to 1868.

One famous example of this was when a feudal lord who later became the ruler of Japan, Hideyoshi Toyotomi, used a very clever tactic of inundation to successfully siege a castle. In no time, the imaginative warrior designed and built an earthen wall to encircle the castle, made precise calculations to draw water from the nearby river to flood the castle and drive out the enemy. In peacetime, such technology was used for constructing waterworks. There was another benefit of building the waterworks, namely, the soldiers were employed in the construction activity, providing them employment and gainfully utilising their potential. During the Edo period, 32 waterworks were completed in various parts of Japan. Of these, 25 were completed in the 17th century, when attention shifted from war to municipal development.

Recent excavations reveal the high level of knowledge and expertise. Huge flumes (water channels that drive a mill wheel) were dug out. These were the main trunk lines. The floor of such channels was made of wood. It featured grooves filled with sand and clay in order to make the floor durable and impervious. The sides were made of rectangular stones placed one on top of another. The top was also covered with huge slabs of stones. The secondary pipes were made of hollowed logs or planks placed one on top of another, while the smaller population was provided water through with bamboo.


Military in nature, the Roman society built huge, expensive aqueducts. To them, these were symbols of a high civilisation and a display of their power, not just at home but also in conquered lands. The main factor behind the construction of these large projects was war and governance of other countries and races.

For example, take the Aqua Anio, which was completed in 269 bc . This was funded by the plunder from the defeat of King Pyrrhus of Epirus in the north of Greece. Similarly, the spoils of wars with Corinth and Carthage provided for the Aqua Marcia, built in 130 bc .

Another reason for constructing huge aqueducts, especially in regions conquered or occupied by the Romans, was to create 'grand' symbols of the Roman Empire and its 'high civilisation'. The cost was, obviously, not a limiting factor, and Rome spent lavishly on aqueducts.

The people of Edo, however, were quite aware of the expenses of constructing waterworks. The Roman water systems were maintained by the bureaucracy for the State and used, therefore, without equity. The Edo waterworks were people-driven.

Due to insufficiency of funds from the government, some construction works were completed through funds acquired through repeated petitions by townsfolk. People were conscientious and cooperative, afeature conspicuous by its absence in Rome. Though the Edo society was ruled mainly by the samurai or warriors, the common people had a strong say in management. Public participation existed during those days, and this was the driving force in the development of efficient waterworks.

The ancient Romans treated their rivers as sewers, dumped garbage and sewage into the Tiber. Because of this, the riverwater was not suitable for drinking. Consequently, water was drawn from distant sources like natural springs and Tiber was used more as a receptacle for untreated sewage.

Edo had a more sensible approach. Water from the Tama river was well utilised by its inhabitants. The people of Edo utilised human excreta as fertiliser for agriculture, a tradition that continued into the 20th century. Even Tadashi Ogawa, the current director of the Japan Foundation in New Delhi, can recall the management of human waste: "I remember how people used to sell excreta." He says the riverwater was largely free of contamination and was even suitable for drinking. This also cut down the expenses on a sewage system.

Initially, Edo depended on the small rivers and streams that eventually entered the Edo Bay. But, due to an increase in population by the mid-16th century, this was not possible. There was a need for more sophisticated means of water supply. By the end of the 17th century, two major and four supplementary systems, supplying water to every part of Edo, were already completed.

But the saddest part of the story is that modern Japan is pursuing the same Rome-like model and forgetting the beauty and sustainability of its traditions. Although untreated waste is not dumped into the rivers even today, nobody uses excreta as fertliser. A rich traditions is dying out.

The article has been adapted from 'A Watery Tale of Two Cities: Roma and Edo', published in the September 1997 issue (No 11) of Rivers and Japan.