Experiments in rainwater harvesting are recharging parched aquifers in Kutch 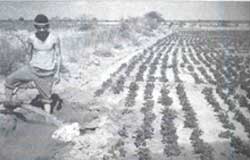 AT BHUJPUR, 32 km from the coastal town of Mandvi in Kutch, the Nagmati river is only a bone-dry riverbed with a small, out of place check-dam. But buried in the sand lie the village's life- support systems - a dyke and 4 tubewells that quietly recharge the underground aquifer. Over 200 such innovative rainwater harvesters have been constructed in Gujarat's and Kutch district, under technical guidance from Vivekanand Research and Training Institute (VRTI), an NGo headquartered in Mandvi (Down To Earth, Vol 2, No 8).

Kutch: the tourism department's incessant, hyped image- making has ingrained in our minds an image of colourful men and women in ethnic attire. In reality, straggly bushes struggle to survive here and dust creeps in everywhere. An erratic, idiosyncratic rainfall pattern has turned India's 2nd-largest district into a virtual desert: you can expect anything between 3 mm of rain in a whole year, or a deluge of 450 mm in a single day. Kutch's 97 rivers are ephemeral - brimming today, gone tomorrow. The only source of fresh water lies underground. Over the years, as the demand for it has grown, withdrawal has far exceeded recharge.

The consequences have been disastrous. Closer to the coastline, sea water ingressed rapidly into the aquifers. With no water, many villagers just fled. Elsewhere, desperate farm- ers sank borewells more than 150 m deep in a futile search for water.

In 1989, following discussions with farmers in Rayan vil- lage, 25 km from Mandvi, the VRTI staff, along with the people, decided to venture into rainwater harvesting. Eighteen check- dams were built on the Rukmavati river, and its numerous tributaries.
The impounded water increased percolation through the soil and boosted aquifer recharge. Says Jayanti Patel, a farmer in nearby Don village, "Because of Rayan's dams, even our wells now have water." In addition, water which ran waste into the sea became available for lift irrigation. At Ratadiya, Manjib,hai Prem Patel, a farmer who owns 2.34 ha of land near a village with 4 dams, installed a pump 3 yea Irs ago to i water. He now exuberates, "Earlier, if it did not rain, I'd lose everything. Now,I'm sure of 2 crops annually."

But mere check-dams were n6t enough. Explains K C B Raju, technical director, VRTI, "Once a check-dam is full, water from the next rain will run waste. The percolation rate had to be increased to maximise harvestini"

The "recharging tubewell" tRT Well) was the VRTI'S ingenious answer. It is a slotted Pvc pipe 20 cm in diameter, directly feeding the aquifer with surface 'water. Floodwater sediments are filtered out by a 6m x 6m x 6m filter bed of gravel, sand and pebble. An additional barrier of coir rope wound around the pipe ensures that only clean water enters the aquifer.

'The VRT1 then broke fresh ground with the subsurface dyke. Essentially a groundwater dam, it harvests subsurface, or base flow-water from a riverbed's permeable sand. A trench is dug in the riverbed till it touches the impervious rock layer, using a plastic sheet placed on the downstream side to dam the base flow. RT wells are dug in front of this "dam" to trap the water and lead it into the aquifer. The trench, along with the plastic-sheet dyke and the RT Wells, is then filled up.

At Bhujpur, a 10.5 m subsurface dyke and 4 1ZT wells, 67 m deep have worked wonders. Says an incredulous Dewan Gadvi, who owns a 1-ha plot, "Water in our well rose by 10 m! And it's been the same story up to 1- 1.5 km on either side of the dam."
Gadvi feels that the water quality has improved. Concurs Bhimjibhai Patel, a farmer owning 20 ha of land in Gandhigram village, "The water is definitely better now. Earlier, it used to taste like seawater." The viz,n's regular water Manjibhai watering his fields by lift irrigation quality tests in all its 60 RT Wells corroborate this. At Bhujpur the level of Total Dissolved Solids (TDS) dropped from' 1,250 mg/l to 750 mg/l. Raju explains that the influx of thousands of cubic metres of harvested rainwater, with a TDS Of about 100 mg/l, improves the quality of the groundwater. The groundwater in this region normally has a TDS of about 1,500 mg/l. The land has paid back rich dividends.

Unfortunately, in some cases, it appears that the rich alone are getting richer. Ram Murji Gadvi of Ratadiya, who owns 0.75 ha of land, cannot afford Rs 10,000 for a pump. He thus buys water from any of the 19 pump owners, paying Rs 200 per 0.4 ha of land irrigated every season.

According to Tulsi Gajara, managing trustee, VRTI, land is available in plenty in the Kutch, which is why the number of landless people is very low. Even their lot is improving, says Gajara, since "they benefit because they get more opportunities for labour, once agriculture expands".

But the inherent inequalities are compounded by a lack of community Organisation. Rather, there is a tendency to turn to the VRTI to wave its magic wand and cure all ills. The people's involvement in the project remains restricted to contributing 25 per cent of the total cost of construction, which ranges from Rs 15,000 to Rs 12 lakhs for a check-dam, NaI, Rs 7-21 lakhs for a subsurface dyke and around Rs I lakh for an RT well.

The VRTI has feebly attempted motivating the people to form a Gram Vikas Mandal (village development council) at Ratadiya and Gandhigram. But despite the existence of the 3-year-old, 21-member Mandal in Ratadiya, which has a population of 350, waste weirs in 3 of the check-dams lie broken and in dire need of repairs. Patel tells a VRTI staff member, "Get this repaired quickly. We are willing to come and work on it, but you have to get it done because we cannot afford it.

Gajara acknowledges that there have been lapses on their part. "We didn't give much importance to community participation earlier. But we are working on it " In fact, dependence cannot be washed clean with now. rainwater, and this fact can kill the best initiative.