A barren district of Rajasthan is seeing development, thanks to rains last year and flood in 2006

Once-parched and barren Barmer is turning over a new leaf. About five years ago, Poona Ram, 45, shifted from this desert district of Rajasthan to Gujarat in search of work. He was unable to support his family at a place that could not give him employment. But Poona Ram returned. It was water that brought him back.

In 2010, this part of The Thar saw rains as never before. Rainfall was recorded 98 per cent more than the average of the past 50 years. This gave agriculture a sudden boost and development became the keyword.

Ram, who earlier lugged salt sacks at the Kandla port in Gujarat and made Rs 20 to Rs 40 a day, is now farming matira (a form of watermelon) and gwar (fodder for livestock) in his village. He sells matira seeds at Rs 45 per kg and gwar at Rs 22 per kg. Matira seeds are used to make a variety of snacks. The oil extracted from it is used for cooking. “Water has washed away my days of misery,” he says.

Like Ram, many who shifted to Gujarat, Punjab and Haryana have now returned to till their land. Ground water level in Barmer city and some blocks of Barmer district have increased by more than 10 metres, helping farmers to sink tubewells for farming.

Forty-year-old Devraj, once a labourer in Kawas village in Barmer, is now thinking of getting his daughter married in a flourishing household. The 1.5-hectare land at the back of his house that lied barren now grows vegetables and pomegranates. With these he can support his family of five. 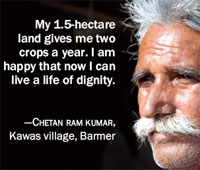 Similar is the story of 60-year-old Chetan Ram Kumar of the same village. His 1.5-hectare land gives two crops a year. “I am happy that now I can live a life of dignity,” he says. The land has given Devraj and Chetan money to sink tubewells to irrigate it.

A long sufferer of acute water shortage, Barmer’s district administration has introduced projects to save water. It is building infrastructure for rainwater harvesting.

As many as 47,779 tankas have been constructed under the Mahatma Gandhi National Rural Employment Guarantee Act (MNREGA). Tankas are small well-like structures made of concrete, cement and sand. During months when it does not rain, government water tankers fill them up.

The Nagarda panchayat has built two 2.1336-metre tankas near Poona Ram’s house to collect rainwater. “Lack of water all these years has made us realise its importance. Now we try to conserve every drop of rain,” says his wife Kamlesh.

In 2006, the flash flood that swept Rajasthan also came as a boon. It created at least three large lakes in the district, each covering seven to eight square kilometre.

The district administration has refurbished a poshal nari (man-made pond) built about 40 years ago. This 33- hectare-vast and 10.06-metre-deep pond built in the middle of sand dunes in Nagarda village was drying up. “Under NREGA, its base has been thickened with more layers of black soil. This prevents seepage,” he explains. Revived at a cost of Rs 8 lakh, it serves around 10,000 people and their livestock in 14 villages. The area around the pond now has good vegetation and invites migratory birds. The Barmer collector has, therefore, proposed turning the area into a tourist spot.

As agriculture is improving, so is the population of Barmer. The migration process has reversed as people now have employment opportunities because of massive development projects being undertaken by the government and private companies. Government officials who once saw the district as a punishment posting now have ample scope to work.

For now, the district is witnessing construction all around. New roads, schools and residential colonies are fast coming up. In the past three to four years, Barmer has seen around 600 new schools. Private builders are developing about 30 residential colonies. Barmer city will soon see its first mall at Mahaveer Nagar which will cover an area of 5,806.44 square metre.

This fast-paced development has resulted in skyrocketing land prices as everyone wants to own land here. “In the past four years, land prices have increased 20-25 times,” says Alok Singhal, builder and property dealer in Barmer.

This growth, however, is missing in the peripheries of the district which did not receive good rainfall. Rapid development may act as a curse for Barmer, feels Lata Kachhawa, joint secretary of Society for Upliftment of Rural Economy, a non-profit working in the district. “As water table in the area has risen, residents have started digging tubewells in large numbers. In the long run, this may force Barmer to its previous state,” she says.
Special Report Special Report Water Resources Tubewells Rural Water Harvesting Rural Development Rajasthan Rainfall National Rural … Migration Migration Irrigation Irrigation Barmer (D) Agriculture
SUPPORT US