Ahmedabad Municipal Corporation hopes to arrest the city's dipping groundwater by reviving its dying lakes. But in the absence of strong wetland rules and intention, the efforts will prove futile 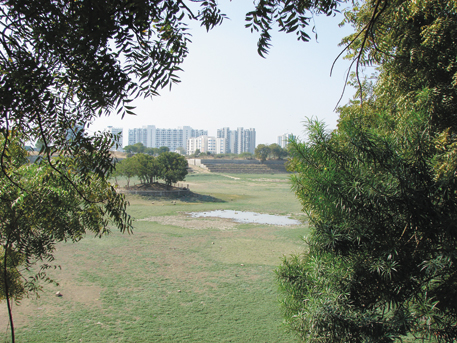 THE WATER table of Ahmedabad, like in most cities in the country, is dipping at an alarming rate, with the levels in many regions plummeting to more than 100 metres below ground level. The reasons are the same—unfettered urbanisation and industrialisation—and so is the city’s proposed solution—revive the groundwater levels by restoring its lost lakes.

The solution may sound simple but executing it on the ground is a daunting task. An optimistic Ahmedabad Municipal Corporation (AMC) says it will identify the lakes under threat by March end and then draw a plan to revive them.

Associate professor at Gujarat University, Hitesh Solanki, who has documented the status of several lakes in the city, says development around the lakes led to encroachment of the natural waterways, resulting in their death. One example is the Sarkhej Rozalake, which is located 8 km southwest of the main city. This peri-urban area was turned into an industrial hub in 1998 and brought under the jurisdiction of the city’s municipal corporation. The lake, built by Sultan Mehmud Begda in the 15th century, has monuments of archaeological importance, which are a popular tourist attraction.

“Before 2004, migratory birds, including cormorants and flamingos, were often seen there between December and February,” says Bhavana Ramrakhiani, convenor, Ahmedabad Community Foundation (ACF), a non-profit working on environmental issues. She adds that the construction of high-rise buildings on the Sarkhej-Gandhinagar highway in 2004-05 led to the loss of greenery in the area. The human-made lake was part of a network of lakes in the area. “It traditionally received water from the elevated Shingoda or Makarba talaav(lake), which received water from lakes (in Prantij and Santej villages) near Ahmedabad,” says Vasudevan Nair, deputy general manager of AMC, who looks after the heritage department of the civic body.

The problem began when the inflow of water from the feeder Shingoda talaav stopped because of encroachment of the feeding drains connecting the two lakes. Today the Sarkhej Roza lake has water for just three months during rains. “The high rate of evaporation in the area does not allow the water to stay for more than three months and this period is too short to allow groundwater recharge in the area,” says Nair. “Till 2005, tourists would enjoy boat rides on the lake throughout the year,” says Shafi Ahmad, who sells beads and metal rings in the area.

Abdul Gani, a frequent visitor to a dargah in the area, says that groundwater was always shallow in the area, but in the past seven to eight years it has dipped to 15 metres. “I used to take bath in the lake during summers, but it is now dry most of the year.”

Talking about how difficult a task it will be to revive the lake channel,Ramrakhiani says Makarba talaav is not even notified as a lake in the government records. The other major issue is that the land mafia around the area digs away the soil from the lake bed for the construction of buildings. The municipality claims it has lodged complaints several times against these builders to stop the excavation but there was no positive outcome.

Nair explains that the high rate of excavation from the lake has lowered the level of Makarbatalaav much below the level of SarkhejRoza and this has stopped the natural flow into the lake. Non-profit ACF says illegal soil excavation from the lake started in 1998-99. The Archaeological Survey of India (ASI) was renovating the monuments around the lake during this time, but they did not stop the illegal excavation because they are “only supposed to take care of the monument and not the water body adjacent to it”, says an ASI official.

“Encroachment of the natural drains between the two lakes, lowering of the lake bed of Makarba talaav meant rainwater stopped flowing between them,” says Nair.

“In 2009, with the help of Ahmedabad Urban Development Authority (AUDA), there was an attempt to fill up the Sarkhejlake,” says Arif Agharia, senior conservation assistant, ASI. Agharia said that ASI protested against this plan of bringing water into the lake by artificial hume pipes.

In November 2012, AMC started laying stormwater drains in Sarkhej village and connected the drains to the Makarba lake. This brought some life to the Sarkhej lake in the monsoon of 2013. Ramrakhiani says “this temporary solution” is effective during the monsoons only. Solanki adds that analysis of the water collected in the Sarkhej lake after the monsoons showed high concentration of phosphate in the water which indicates that domestic sewage was entering into the lake through the stormwater drain.

The same story holds true for almost all the other lakes in the city, including the Chandola lake, the largest lake in the city. In 2000, Ahmedabad lawyer Shailesh Shah filed a public interest petition to save the water bodies of Ahmedabad. In response, the court ordered the authorities to preserve the lakes and ponds of the state in 2002. The verdict also ordered the state to undertake urgent measures for checking pollution in the lakes and rejuvenate the water bodies. But more than a decade later, the municipal corporation is yet to identify the water bodies that need to be protected. Nair says though the commissioner has ordered immediate identification of the threatened lakes of the city, it is not clear whether Sarkhej Roza will be one of them.

Experts say the fresh attempt to revive the lakes will fail till the time “effective wetland rules are put in place”. Tej Razdan, convener of Jheel Sanrakshan Society, a non-profit based in Udaipur, says, “The present wetland rules are toothless.” Shashank Shekhar, a hydrologist working in Delhi University, says immediate programmes are needed to revive the water bodies. Nair says that the programmes should not only work on the lakes but also on the feeder channels and catchment areas to make them encroachment free. This can happen only if the government is committed.