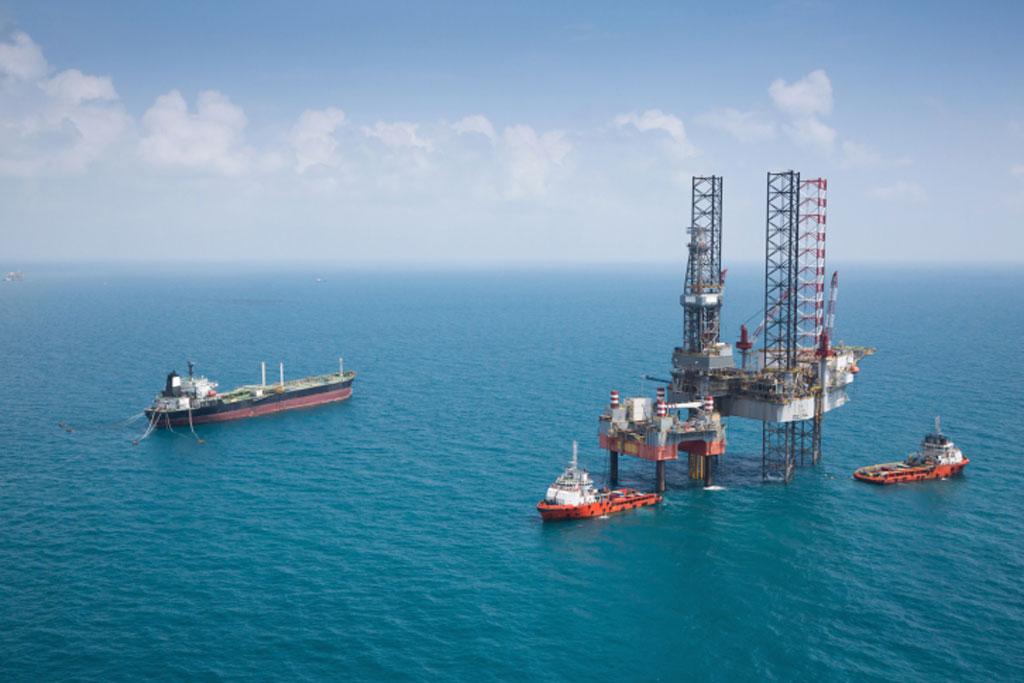 The assessment reveals that while we have a general qualitative understanding of impacts on oceans, more quantified information is needed to make the information more acceptable (Photo credit: Thinkstock)

'Human impacts on sea are no longer minor'

Cumulative impacts of human activities have pushed the oceans’ carrying capacity almost to its limit, according to “The First Global Integrated Marine Assessment” carried out under the United Nations and released on January 22.

The report, which assesses the state of the world’s oceans from the scientific as well as socio-economic point of view, was presented at and endorsed by the UN General Assembly in December 2015.

It warns that climate change, overexploitation of marine living resources, increased uses of ocean space, rising pollution and other factors have placed excessive pressure on oceans. It also states that sustainable use of oceans cannot be achieved without coherent management of all sectors of human activities affecting the oceans and addressing the delay in implementing known solutions. “Human impacts on the sea are no longer minor in relation to the overall scale of the ocean. A coherent overall approach is needed,” the report says.

Headed by a 22-member Group of Experts, the report brings together findings from the world over with the aim of providing scientific evidence so that governments and other policy makers can make informed decisions. UN Secretary-General Ban Ki-moon writes in the foreword that the assessment report will help in the implementation of the recently adopted Sustainable Development Goals (SDGs), particularly SDG14 which pertains to conservation and sustainable use of oceans, seas and marine resources. “It is clear that urgent action on a global scale is needed to protect the world’s oceans from the many pressures they face,” Ban Ki-moon writes.

Some 361.9 million square kilometres of ocean area is divided among 7.3 billion of the world’s population. The report explains that each of us have only one fifth of a cubic kilometre of ocean out of which we derive our annual oxygen supply, lifetime freshwater supply and all the seafood we eat. Our dependence on the oceans has influenced the location of our settlements, economic activities and social rules, including national and international oceans laws and treaties. But with the dramatic rise in human activities, we are placing an increasing burden on ocean resources. By the year 2050, global population is estimated to touch 10 billion, leaving only one eighth of a cubic kilometre of ocean for each person’s needs.

We are also subjecting oceans to negative impacts of our activities. The report highlights stratospheric fall-out from atmospheric nuclear-weapons testing as a prime example. Testing of large nuclear weapons leads to long-term and nearly worldwide deposition of deposition of radioactive materials, even if it is limited to a particular area. Man-made hazards such as oil spills and economic activities like overfishing and unregulated tourism on beaches harm marine life. In this way, the report has examined and listed some human pressures as follows:

Gaps in management of human impacts

Availability of comprehensive data is critical for governments and other bodies to make informed decisions about the impact of human activities on oceans. This may pose a challenge, says the report, because it requires bringing together a large number of different sets of data. The assessment reveals that while we have a general qualitative understanding of impacts on oceans, more quantified information is needed to make the information more acceptable.

Techniques for collating all this information are still a work in progress, the report adds. It gives the example of the Ocean Health Index which is an attempt to produce a comprehensive numerical assessment of the ocean at the highest possible level. The Index, however, suffers from the lack of reliable data and ends up counting estimates and allowing subjectivity to creep in.

Hence, the report makes a case for developing methods for integrated assessments, which not only take into account all scientific, social and economic aspects, but also give quantified information about oceans in all parts of the world.

Impact of fisheries on marine biodiversity 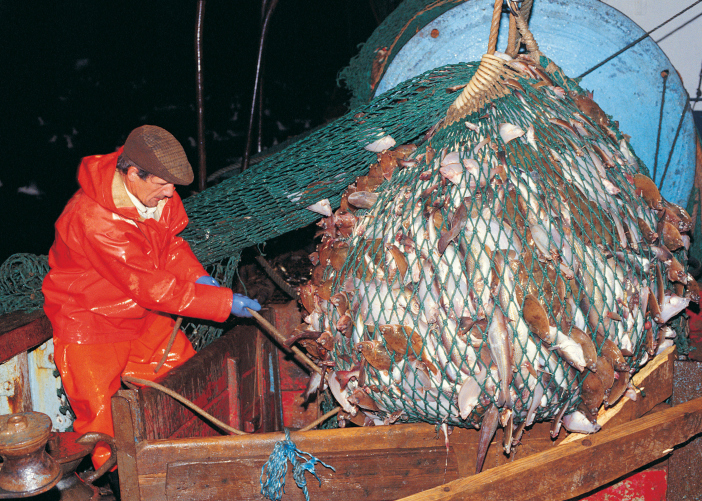 Harnessing the ocean’s fish and shellfish reserves for human consumption and industrial purposes achieves record-breaking proportions each year. FAO data shows that production of fish from capture fisheries and aquaculture has grown at the rate of 3.2 per cent in the past 50 years, from about 20 to nearly 160 million tonnes by 2012. Of this, capture fisheries accounted for around 80 million tonnes. Eleven Asian countries—led by China, Indonesia, Japan and India—and seven others together were responsible for 76 per cent of production from capture fisheries.

An estimated 3.7 million fishing vessels operate in marine waters globally; 68 per cent of these operate from Asia and 16 per cent from Africa. The fisheries and aquaculture sector employs around 58.3 million people.

First recognised in the 19th century, the impacts of capture fisheries—catching of naturally occurring fish and other aquatic organisms—were given a proper formal platform with the establishment of Food and Agriculture Organization (FAO) in 1946.

Overfishing remains a critical problem with FAO stating that 29 per cent of assessed stocks are presently overfished. 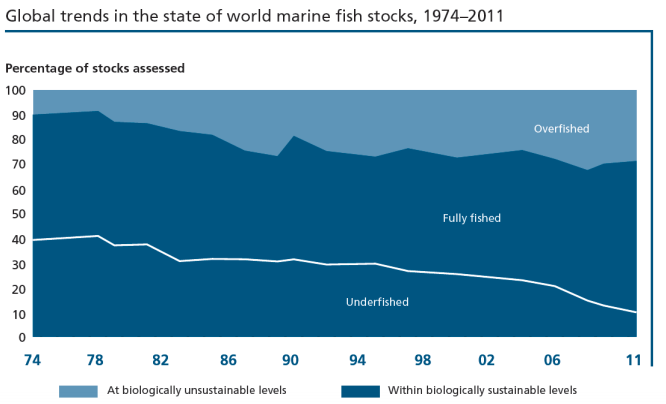 Some of the possible impacts include the following:

Fishing of commercially important species is also said to have a cascading effect on the whole food web. The report explains the removal of top predators may result in changes in the abundance and composition of lower trophic levels, impacting even unrelated fisheries. Discarding of by-catches—catching of non-target species—has declined in recent years but remains high at around 7.3 million tonnes.

Capture fisheries provide an essential source of nutrition to humans, but are vulnerable to contamination by toxic chemicals. Climate change is also expected to impact the sector, especially small-scale, artisanal fisheries.

Capture fisheries will not be able to meet the demand for seafood in the next decade. This gap in supply is increasingly being met by aquaculture or fish farming. FAO states aquaculture is the world’s fastest growing animal food producing sector and has the potential to contribute to food security. In 2012, farmed food fish contributed a record 66.6 million tons, equivalent to 42.2 per cent of the total 158 million tons of fish produced by capture fisheries and aquaculture combined (including non-food uses).

However, the report states that there are significant environmental impacts of aquaculture. These include the following:

Assessment of other human activities on the marine environment 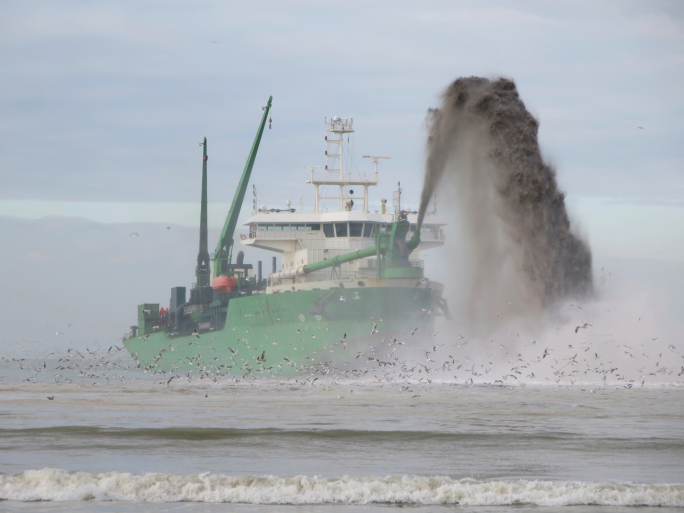 According to data quoted in the report, around 75 per cent of all international trade (in terms of tonnes) in 2006 was carried by sea. Along with the quantity of cargo, the length of voyages has also increased. But disasters involving ships often lead to catastrophic impacts on the marine environment. Oils spills from shipping cause extensive mortality of seabirds and marine life, as well as coastal pollution. Commercial shipping also causes an increase in low frequency anthropogenic noise. Shipping noise is centered in the 20 to 200 Hz frequency band. Noise at these low frequencies propagates efficiently in the sea, and can therefore affect marine biota over long distances, states the report.

Ports which see a concentration of large and numerous ships witness higher emissions and discharges such as chronic oil discharges, garbage, sewage, anti-fouling treatments, air pollution and noise. Container ports need more land for offloading of cargo. This land is often acquired by land reclamation of mangroves and salt marshes. Some ports require deep access channels, often created by dredging or blasting through rock and in some cases, coral reefs. Dredging can affect the hydrodynamics of an estuary, affecting adjoining beaches and the seabed. On the other hand, blasting can cause destruction of ecosystems in the area.

Offshore renewable energy development may cause negative impacts on marine flora and fauna and the larger ecosystem during construction. These effects may sometimes extend to operation and decommissioning phases. Turbine construction can cause mortality due to physical collision, while noise during pile-driving operations can impair hearing in marine mammals and disrupt their behavior in the surrounding area.

Desalination is an essential process which makes usable water available to people in many parts of the world. Climate change is likely to increase the demand for desalination as even a 1°C rise in global mean temperature (compared to the 1990s) will mean that about 8 per cent of the global population will see a severe reduction in water resources, according to an Intergovernmental Panel on Climate Change (IPCC) estimate. With this increase in demand for freshwater, the focus will turn to its environmental impacts. Desalination plants, which don’t depend on some form of renewable energy, lead to emission of greenhouse gases to generate the required energy. Other impacts include the intake of feedwater and the discharge of brine.

Dredging, which is employed to enable shallow-water seabed mining, results in physical alteration of the seabed environment. The report quotes studies which show that dredging can result in a 30–70 per cent reduction in species variety, a 40–95 per cent reduction in the number of individuals, and a similar reduction in biomass in dredged areas. It can also cause changes in hydrodynamic processes and seabed geomorphology.