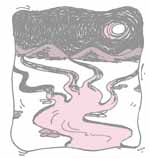 "The formation of the National Movement of Watershed Development, about which many people were talking outside the government, has been fulfilled. At this point, it is not important how much money will be spent on the project or how it is going to be implemented. At least it has been recognised by the Government."

"The Budget has given a major thrust to rural development. The panchayats (village councils) will collectively decide the future of [developmental] projects or schemes. Also, a state that would not involve people in its projects would lose out on funds. The formation of National Movement of Watershed Development is a right step in the right direction."

-- N C Saxena,
former secretary to the ministry of rural areas and employment.