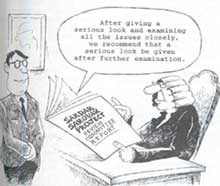 SMILES lit up the battlescarred faces of the activists fighting the Sardar Sarovar project when the Supreme Court castigated the Review Committee Report (RCR) for being vague, "inconclusive and ambiguous". The committee, which had watered down its own role and independent status, had given no pointers to what the future course of action should be. The apex court referred the issues back to the committee for further investigations.

The court also asked the state governments of Gujarat, Maharashtra and Rajasthan, the Central government and the Narmada Bachao Andolan (NBA) activists to inform it about issues which the committee should study in depth.

This judicial reprimand on January 17 was followed 4 days later by even sterner words. The presiding judge, Justice J S Verma, said that if there was any violation of the orders before the court decides the issue, "we can even demolish the dam". However, the court also rejected the NBA's plea for increasing the height of the dam.

The division bench, consisting of Justice Verma, Justice S P Bharucha and Justice K S Paripoornan, has given the committee 4 weeks to complete the task of filing a definitive report. The new report will be delivered in a sealed envelope to the court's registry office on February 28.

The ruling came close on the heels of an inter-disciplinary panel being set up by the NBA and its support groups to collect scientific evidence to counter the claims of the dam's protagonists. The quantum of flow, financial viability and the quantum of displacement will be some of the key areas of research.

The court and the NBA activists were particularly irked with the committee's attempt to shift the onus of resolving contentious issues on to the Centre. Himanshu Thakkar of the NBA says, "The government is partisan. It cannot be expected to take an objective view of things."

The only point on which the RCR was unambiguous was that it was not reviewing the project itself but the criticisms against it. It had gone into the matter "with a view to find out whether sufficient basis has been established for the doubts expressed and whether a thorough examination is warranted".

The committee had been set up in 1994 with a view to "review all aspects related to SSP". But the government effectively barraged its efforts through a series of orders, leaving it groping to a meagre straw: "possibly focus on issues which can lead to the improvement of the implementation and benefits planned for SSP". That meant that "the project was not under review".

The committee systematically sought to tide over all points of criticism by suggesting better implementation. For instance, in response to the criticism that due to seepage loss, irrigation efficiency can never exceed 40 per cent, the RCR insists that the target of 60 per cent is achievable, provided the proposed measures of irrigation management are implemented through a judicious cropping pattern.
The state governments have found an easy escape route by committing themselves to go by these "better implementation" recommendations. Says a highly placed official in the ministry of water resources, "Response from Gujarat is very positive, as they have readily agreed to abide by most of the recommendations, except those which might require the redesigning of the project itself".

On the face of it, the RCR does point to fundamental flaws in the dam project. It has questioned the dam authority's claims regarding hydrology, rehabilitation, resettlement, expected benefits on irrigation, drinking water, and the likely environmental impact. But rues scientist and NBA sympathiser C V Sheshadri, "While raising some doubts regarding the viability of the project, the RCR has not explicitly stated the logical implications of the findings."

Even during the course of investigations, there was a deluge of evidence in support of alternative approaches to water and energy management. Floating clear of commenting on these, the committee has, however, passed them on to the government, recommending its "most careful attention".

Doubtful issues, such as hydrology in areas like the Kutch and Saurashtra, have been examined. The report notes that the optimum development of local water resources should be ensured if increasing the provision of Narmada waters to scarce areas is not technically or economically feasible.

The Gujarat government has been indicted for not making adequate provisions for local water harvesting systems, which had been accorded the "highest priority" in the 8th Plan. This emphasis on alternative resources has been generally welcomed.

The RCR has, however, dampened the spirits of the state governments by questioning the dubious natures of some of the project parameters. The quantum of flow, the basis on which the project has been designed, has been found to be an "over-estimation". Left unresolved, this can have serious implications for the intended scale of benefits from the project.


The project was planned assuming a 75 per cent dependable yield at 28 million acre feet (MAF). But data on river flow between 1948 and 1988 give a dependable yield of 22.9 MAF. This would reduce Gujarat's share from 9 to 7.4 MAF, implying that Gujarat might have to maroon its water planning if it is based on such erroneous bases.

The states see in such observations a subversive tendency to open up issues otherwise barred under the award of the Narmada Water Dispute Tribunal. The award had held that parameters such as height, full reservoir level, maximum water level and the full supply level of the canal cannot be reviewed within 45 years of the notification.

The Supreme Court ruling has shored up the activists' hopes. Says Thakkar, "This time the mandate of the committee will have to be devoid of ambiguities. The serious doubts about the expected scale of benefits will now have to be investigated to the logical end."

This, however, is not a final victory, but possibly a mere beginning of another round of tortuous struggle. Amulya K Reddy, an energy scientist, summed this up succinctly: "The upshot of the debate generated by the RCR is the repeated hints at exploring alternatives and redefining paradigms of planning for water and energy resources in this country."