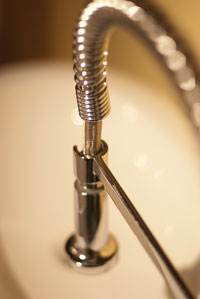 Tapasya Mohan, a 29-year-old executive in a telecom company, recently purchased a refrigerator. She did not go by looks but the five-star label on the fridge for energy efficiency. She did not mind paying more; the salesman convinced her she would save more in the long run on her electricity bills.

Mohan wishes there was a similar rating system to help her choose a water closet to replace the leaking cistern in her bathroom. She gets water supply for only two hours in her Gurgaon home near Delhi and the leaking cistern drains her storage tank by evening. Mohan will have to wait if she expects help in making an informed decision. Water efficient taps and closets are available in the market, but they are not graded.

Makers of sanitary ware and fixtures rely more on sleek design and looks to attract customers. “Only one in 20 customers visiting our outlet enquires about water use. Most customers are only bothered about looks, design and cost,” said Gautam Dhingra, sales head of a Parryware Roca showroom in a posh locality in Delhi.

Known brands like Parryware and Hindware now sell dual-flush toilet models where the user can opt to press the half-flush button that flushes three litres or the full-flush button that empties six litres (see table). The single flush cisterns use 10 to 13 litres of water. A good number of customers still buy big cisterns, said Rai.

Other available water-efficient fixtures include taps with aerators and flow fixtures, sensor taps that shut off in a few seconds, showers with flow regulators and waterless urinals. A person using faucets with aerators (to spread the water flow into small droplets rather than a jet stream) and flow controls can reduce water usage by 50 to 60 per cent.

If Mohan were to get her kitchen and bathroom fitted with water-efficient fixtures, she could save 415 litres water a day, if one goes by Tata Consulting Engineering’s 2009 study of households. The saving is high considering the average water availability in India is just 100 litres per person a day (lpcd) against the prescribed standard of 135 lpcd. Of this, nearly 30 per cent water is used for flushing and about 50 per cent is used for bathing, washing and cleaning.

The informal market that caters to 50 per cent customers in small towns and cities also provides water-efficient fixtures. Nitin Jain, proprietor of Prayag Sanitarywares, a dealer in Delhi’s Paharganj area near the walled city, said dual flush pvc cisterns are now available in 5/10 and 3/6 litre models for Rs 570 to Rs 670; a branded cistern costs Rs 800 upwards. Government offices are increasingly buying dual flush cisterns, said Jain. Other products like sensor taps and waterless urinals are not very popular because they are costly, he said.

The Municipal Corporation of Delhi is still debating the viability of the waterless urinals it has installed at several locations in the city (see: ‘Break the odour’, March 21, 2010).

Rating water fixtures for water efficiency could be the most effective way to promote them among the average Indian consumer, said Aruna Grover, professor at the School of Planning and Architecture in Delhi. She said the majority of builders and architects do not promote water-efficient fixtures.

This is evident from the fact that just 117 buildings in India have been certified green under the voluntary LEEDIndia rating programme, promoted by the Indian Green Building Council, an industry initiative. The majority of the new office and commercial buildings and residential estates do not apply for green rating.

“Declining availability of water may lead to an attitudinal change,” said Grover. Rating systems are enforced in several countries. For instance, Australia’s Water Efficiency Labelling and Standards system aims to save about 100,000 million litres annually and the WaterSense programme in the US helped save 136,274 million litres water in 2009.

In India, the Bureau of Indian Standards (BIS) has set standards only for manufacturing processes and product quality, not for water efficiency. What’s more, these standards are voluntary. Manufacturers claimed they conduct durability and efficiency tests on their own. For instance, Hindware says each of its toilet models are put through seven tests to check flushing performance. The company refused to say more about its testing facilities.

Head of BIS’s civil engineering department, A K Saini, said it may not be possible to replicate water-efficiency standards in India. He said water-efficient fixtures should have complementary sewerage system, which can maintain pressure and flow even with reduced water usage.

Vijayaraghavan Chariar, professor at IIT-Delhi, contradicted Saini. “The Indian sewerage system is usually designed as a combined system which carries water from toilets, bathrooms and kitchens, leading to excess flow of wastewater. Therefore, installation of water efficient fixtures would not affect flow,” he said. The National Building Code also does not provide guidelines or standards for water efficiency.

No agency for water efficiency

The BIS and city civic authorities could take their cue from the Bu reau of Energy Efficiency (BEE), under the Union Ministry for Power, which mandates star labelling for several electrical appliances. A bureau official said many factors worked in favour of star rating in the energy sector like rational electricity pricing, an energy conservation act and a dedicated monitoring agency. The price of water is too low for people to care about its conservation, said Karuna Shree, resident of Delhi and geography lecturer in Delhi University. Mohan of Gurgaon said it is water shortage and not her water bill (of Rs 400) that set her thinking about reducing water wastage.

With inputs from Bharat lal Seth