We are all the same

At first sight, two humans may seem to differ enormously. But looks can be misleading. Among animals, humans make up an unusual group. All humans belong to the same species (Homo sapiens, meaning 'wise human'). Technically, this implies we can exchange our genes with each another. Biologically, it means any two humans are essentially the same

We are all the same 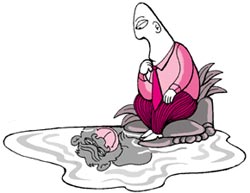 At first sight, two humans may seem to differ enormously. But looks can be misleading. Among animals, humans make up an unusual group. All humans belong to the same species (Homo sapiens, meaning 'wise human'). Technically, this implies we can exchange our genes with each another. Biologically, it means any two humans are essentially the same.

Our closest relatives -- chimpanzees, gorillas and orangutans -- are also unusual in the same way we are. There are no more than one or two kinds of each (because it is now accepted that black-faced, 'pygmy' chimpanzees are a separate species, they have been given a new name, 'bonobo'). Taken together, the four share a very recent common ancestry. Comparisons of dna and proteins, as well as anatomical and biochemical studies, prove this.

The second way is to examine the extent of overlap between blocks or segments of dna. Parents shuffle the blocks randomly and each transmits half a combination to a child. Because there are two parents, the child receives a full set of dna and tends to have a lot of their dna. Cousins will have similar dna sequences, but not as similar as the dna of brothers and sisters. That is because even though cousins have different parents, they share at least one set of grandparents. By extending this reasoning, we see that dna similarity between any two individuals shows how recently they had a common ancestor, and therefore, how closely related they are.

As a species, humans share 98.8 per cent of dna sequences with chimpanzees. This means one of two things. The first conclusion is favoured by most scientists. It says that the 1.2 per cent of different dna is vital: it must be responsible for most of the important differences between the two species, for example the differences in the ability to use tools or language.

The other conclusion follows if you assume that for all practical purposes, 98.8 per cent and 99.9 per cent are the same. If this hypothesis is correct, the differences between us and chimpanzees may be not be genetic, but epigenetic (less to do with the dna itself than with the way in which the dna is organized and the way it functions). In a deep sense, we are really a variety of African ape.

The same dna block-based comparison shows how closely individuals resemble each other. On the average, two human beings share 99.9 per cent of their dna sequences. What about the remaining 0.1 per cent? Close examination shows this miniscule figure comes from differences among Africans and the rest. Equally, the same level of variation is found within Africans themselves. This fits in with the view that in a fundamental sense, Homo sapiens consists of recent migrants from Africa. We are also all Africans.