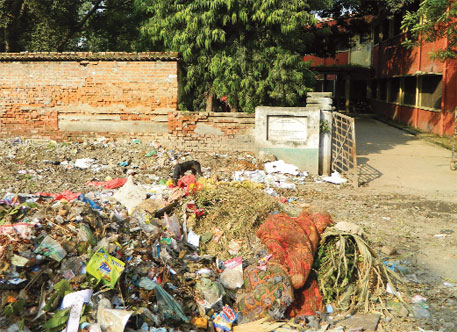 The road to Lala Lajpat Rai Government Hospital, which has Asia’s largest outpatient department, is difficult to negotiate. While piles of garbage are burnt at regular distances, overflowing bins give pigs, donkeys and cows free invitation to feed on garbage spilt on the road. Biomedical and general waste is strewn right at the hospital’s gate. The hospital typifies the situation in the city, home to an integrated solid waste management plant that won Kanpur the Union Ministry of Urban Development’s award for best solid waste management in 2010-2011.

Spread across 44 hectares near National Highway-2, the plant became operational in 2010 with the ambitious goal of making Kanpur the cleanest city in the country. A2Z Infrastructure Ltd and Nagar Nigam Kanpur (NNK) signed a public-private partnership (PPP) agreement to run the plant which was to recycle and reuse solid waste of Kanpur that has a population of 2.7 million.

But the stink in the city reveals how the plant is functioning. And a visit to the site clears all doubts. Instead of collecting waste, the company’s dumpers and compactors adorn the plant premises. Non-working machines, stagnant water in garbage sorting sheds, broken down trucks at the maintenance shed and absence of staff suggest that the plant is rarely operational.

A2Z claims it treats 1,200 tonnes of waste daily through zero-waste management. It runs the waste through a trawmill (or motorised sieve) to separate 100 mm or bigger sized waste from the raw waste. This is used in the waste-to-energy plant. The leftover is run through a 35 mm trawmill. The bigger parts are used to make bricks while the smaller parts are sent for composting, explains Rohit Dosi, manager at the plant. Remains from the 100 mm-sized waste are sent to a scientific landfill. At the compost shed, microbe culture is sprayed over the garbage to hasten decomposing. After 55 days, decomposed waste is packed for sale. This manure is of the highest quality and meets the nutrient values set by the Union ministry of agriculture, says Ashutosh Shukla who works in the quality department of A2Z. 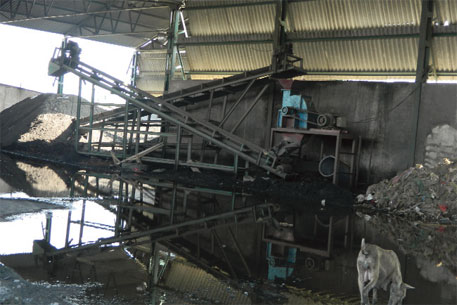 There was no activity at the compost shed when Down To Earth visited it. Piles of garbage with weeds growing on them were lying all over the plant site and there was no sign of manure. Company officials say the compost is sold to state-run KRIBHCO, Shyam Fertilizers Limited and Coromandel International Limited. They did not divulge the amount of manure the plant sells. The shed where construction debris is ground and mixed with dust to make bricks had no sign of bricks, construction material or workers. Instead, it was full of stagnant water. Naveen Agarwal, deputy general manager of A2Z, says operations stopped temporarily because of housecleaning exercise and power shortage. “Since a fortnight, the waste-to-energy plant has not been functioning because all the sorted waste got wet in the rains,” he says.

The PPP agreement between the company and the municipal body is a convenient one-sided agreement. To start with, NNK gave A2Z land for the plant. It pays the company Rs 456 for every tonne of waste to meet the collection and transportation cost. Another Rs 95 per tonne of waste is given to the company for scientific landfill. Profits from sale of manure, bricks and electricity also go to A2Z. Besides, the company collects user fee for door-to-door waste collection—Rs 30 per house and Rs 50 per shop. In two years, the municipal body was due to pay the company a whopping Rs 20 crore, of which Rs 14 crore has been given.

Pankaj Bhushan, senior environment engineer at NNK, dismisses the argument that A2Z benefits from the project much more than the municipal body. “The benefits are long term and will take time to show,” he says. “At present, people are not willing to pay the user fee because till now they have got the facilities for free. Once they start paying this amount, Rs 2 crore will be collected monthly, of which Rs 1.6 crore will go to the company. NNK will use the rest to improve the city’s sanitation.” 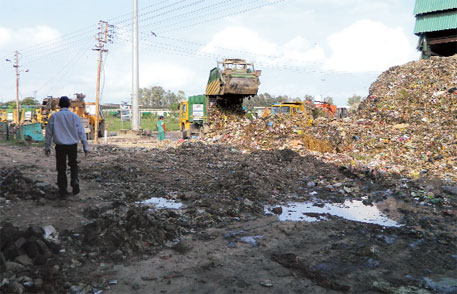 Former Kanpur mayor Praveen Patni had demanded that NNK should get a share in the profits of the by-products that A2Z sells in the market. “The municipal body itself was opposed to terms like profit-sharing, manual and administrative powers and monitoring of the plant in the PPP agreement. He had found discrepancy in the amount A2Z was charging NNK for waste management and the waste it was treating. In fact in September this year, the municipal body had a pending bill of about Rs 5 lakh for scientific landfill. Patni asked the urban development department of the Uttar Pradesh government to initiate inquiry into the working of the company. But the government did not take action.

The company’s detailed project report, prepared in 2006, fixes the cost of waste collection at Rs 136 per tonne. With the added operations and maintenance costs, the total cannot go beyond Rs 190. A2Z charges Rs 456 for every tonne of waste it collects.

The company’s claim of zero waste management is also questionable. “Whichever way the waste is treated, some amount of untreatable waste does remain. This is sent to the scientific landfill,” says Gupta.

According to A2Z’s detailed project report, of the total waste that Kanpur generates, 46 per cent is organic, 19 per cent recyclable, 13 per cent drain silt and street sweeping waste, and 16 per cent construction waste. The rest is mixed waste. A2Z claims to produce 300 tonnes of manure in a day. But around the world, not more than 20 per cent of organic waste can be converted to manure. Going by this, the company cannot generate more than 100 tonnes of manure.

“While A2Z makes hay, residents pay thrice—to the company, to private cleaners for removing garbage and to NNK as part of property tax,” says Chhotebhai Noronha, a civil society leader.

Before the plant was set up, S C Tripathi, who is an expert on solid waste, had started an initiative to collect, transport and process waste in certain parts of the city. It was based on community participation and manual segregation to generate manure. Such initiatives were uprooted by the PPP. Kanpur is as dirty as it was, says former corporator Madan Lal Bhatia. The plant that brought laurels to the city has done nothing more than shifting waste from inside the municipal dustbins to the plant premises and on the roads.