What Is a Clean Fuel ?

What Is a Clean Fuel ? 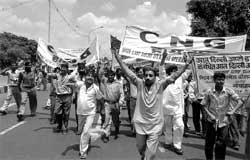 Epca 's report on Clean Fuels, which it submitted to the Supreme Court in early July 2001, argues that no hydrocarbon fuel can be specified as a "clean fuel" which does not cause pollution or is not otherwise injurious to health. But instead, it defined a category of fuels called environmentally acceptable fuels, which could be promoted in heavily polluted areas like Delhi.

Importantly, the authority made a distinction between fuel standards and emission norms needed for "hot spots" -- extremely polluted areas. It argued, "Delhi is in an air pollution hot spot area and requires special approaches to tackle air pollution." This would set the policy for other cities grappling with severe pollution as well.

The authority then examined different fuels and available emission control technologies to arrive at a package of alternative, environmentally acceptable fuels. It said:

l Current petrol supplied to Delhi contains no lead and low benzene (less than 1 per cent). But to call it environmentally acceptable, it is necessary to use catalytic converters for treatment of exhaust gases, assure adulteration does not take place and further reduce polluting constituents like sulphur, aromatics and olefins.

l ulsd with 10 ppm sulphur and low polycyclic aromatic hydrocarbon (pah ) content will be significantly less polluting provided it is used in combination with particulate traps and catalytic converters. It will also be necessary to ensure that ulsd does not get adulterated. In this case, ulsd can be regarded as an environmentally acceptable fuel.

epca , however, did not buckle under pressure to accept lsd as a clean fuel. Its position was that " lsd is not an environmentally acceptable fuel since it does not permit effective use of exhaust treatment devices like particulate traps. Evidently, there is need for further improvement in the quality of diesel as also of measures to prevent adulteration."

To take care of inter-state commercial vehicles, moving in and out of the city, epca suggested a way out -- temporarily. It agreed that these vehicles could run on 500 ppm sulphur diesel. But, the authority underlined that this would be regarded as "transitional fuel" permitted for a limited period only.

This period should be as short as possible because of adverse public health effects, it stressed. "A time bound programme should be drawn up to reduce the sulphur content down to a level at which exhaust treatment system including particulate traps can be effectively used. This level will have to be 30 ppm sulphur or less with controls on pah content of diesel," said the authority's report.


In its report, epca also laid out an action plan to implement the court order to convert commercial vehicles by September 30, 2001. Most importantly, given the truncated governance and lack of accountability, it named the different agencies that need to be directed to ensure the effective implementation.

It recommended:
• Provide an adequate and enhanced allocation of natural gas for Delhi's transport sector and this allocation should keep pace with the growing demand.
Agency: MPNG

• Current infrastructure for cng distribution should be strengthened and increased from its total 71 dispensing stations including 38 daughter stations, as on July 2001, to 90 dispensing stations by December 2001, all consisting of mother/ on-line stations and daughter-booster stations, with a proper distribution across the city. igl should ensure gas pressure of more than 200 bars in all the cng stations.
Agency: MPNG and IGL

• Prepare contingency plans to deal with the eventuality of disruption in gas supply for buses and a plan of action should be filed in the Supreme Court.
Agency: MPNG and IGL

• The deadline of September 30, 2001 for converting all vehicles should be extended, giving reasonable time for delivery of chassis and bus bodies. Those who still continue to ply on diesel beyond that date may be allowed to do so, for a further period of three months, in the interest of the commuting public, but should be fined heavily and punitively.
Agency: Delhi Government

l A ceiling should be put on the number of tourist permits given to inter-state vehicles, equivalent to 1.5 times the normal annual growth rate of this category for the last five years.
Agency: Delhi Government

• Financial incentives should be provided to bus operators purchasing new original equipment manufacturers (oem) and retrofitted cng buses in the form of sales tax and excise tax exemption and low-interest loans with the subsidies ideally recovered from enhanced road taxes on private vehicles like cars and scooters and a tax on a polluting fuel like diesel.
Agency: Union Ministry of Finance,
Delhi Government

The recommendations were not acceptable to the diesel lobby. As bjp leader and former chief minister of Delhi Madan Lal Khurana put it, "the recommendations of the Bhure Lal committee on hiking diesel prices are alarming and unacceptable."

The entire attempt was then to find ways of subverting or undermining the epca report. The petroleum secretary reportedly said in the meeting convened by the prime minister to discuss the cng tangle, that the epca report has to be countered. He and his minister, Ram Naik, then suggested that another committee should be formed, this time under the chairpersonship of R A Mashelkar, head of csir , to device a "comprehensive" auto-fuel policy. As many newspapers reported, cynically, "yet another committee".
Special Report Special Report Water Pollution Vadodara (D) State Pollution … Mahi Land Pollution Lake Pollution Industrial Pollution Gulf Of Kambhat Gujarat Estuaries Estuaries Chemical Industry Chemical Industry Chemical Industry Central Pollution … Central Pollution … Bharuch CNG CNG CNG Fuel Reprocessing Supreme Court Cover Story Cover Story
Donate Now