What killed the chirp?

A study confirms modern buildings, pesticides and mobile towers are responsible for decline in sparrow population

What killed the chirp? 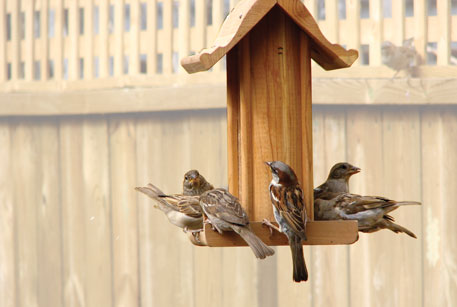 “Sudden loud chirping of sparrows from nooks and crannies, and abrupt falling of their eggs—these were routine accidents in the old Velankar Wada building where we were staying two decades ago. Today such accidents would be considered an event,” says Vivek Velankar, reminiscing his childhood in Pune’s Sadashiv Peth locality. “Now a tall apartment complex stands in place of that building and it is rare to find sparrows.” For Mumbai’s Anand Pendharkar, hearing the chirp of a flock of sparrows at a busy road made him realise he had forgotten their sound.

“I was pillion riding and suddenly saw about 100 sparrows sitting on a clump of bamboo. I cannot recall the last time I saw so many sparrows together.” The disappearance of sparrows remained a matter of conjecture until recently. A countrywide project by the Bombay Natural History Society (BNHS) confirms there has been a considerable decline in the sightings of sparrows. “There is a clear trend of decline in sightings of both house sparrows and their nests throughout India. The Northeast region, however, seems to be doing better,” says Karthik K, project coordinator of Citizen Sparrow.

To reach the conclusion, over 8,000 reports on sparrow absence and presence filed by bird watchers were analysed. The conclusion is being treated as baseline, which indicates wider trends and will be used for further research to understand their distribution and population, says Karthik (see ‘About Citizen Sparrow project’).

According to BNHS director Asad Rehmani, one of the major reasons for the bird’s decline is unrestrained use of pesticides. “These chemicals have killed soft-bodied insects, like earthworms, on which sparrows feed. In the absence of food, sparrows die of starvation.” Another major reason is the modern architecture. “Contemporary buildings with glass facade and close windows do not provide any space for nesting,” points out Rehmani. In the north-eastern region, which is rich in three species —house sparrow, Eurasian Tree sparrow and Russet sparrow— there is larger presence of the bird mainly because of rural atmosphere and old-style buildings. Ornithologist Anwaruddin Chowdhary in Guwahati agrees: “Old houses in Assam have courtyards which facilitate nesting.”

Bengaluru-based ornithologist M B Krishna adds, “Rice is the staple food of the people in the Northeast. It is possible that house sparrows (which eat rice) find it relatively easy to survive there.” Long-time resident of Vrindavan Park in Kolhapur, ornithologist Girish Jathar, who submitted a report for the project, claims an 80 per cent drop in sparrow sightings in the past two decades. “Earlier, I would regularly see flocks of sparrows. But development work like residential projects has altered their habitat. Now hardly two or three are visible in the same area,” says Jathar. Radiation from mobile towers has also affected the sparrows, says Chowdhary, who has authored the book Birds of Assam.

So how can one increase the presence of the sparrow? Rahmani believes restrain on pesticides is a must. “Pushing organic farming and making changes in buildings and modern houses to provide nesting place are the need of the hour,” he says. The government should pay attention to the sparrow like it does in the case of the tiger, he adds. According to Krishna, “Birds act as early warning systems; and those closest to us are house sparrows. If we continue to lose them owing to continued exposure to chemical pollutants and environmental toxins, harmful effects of the latter will make us more vulnerable to diseases such as cancer.”