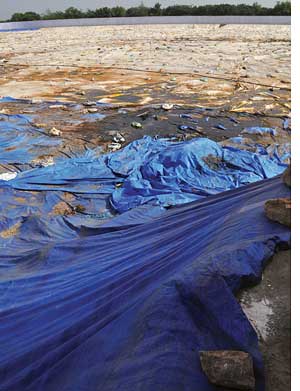 Enforcement and monitoring are the key to safety

Having tsfds and guidelines in place does not mean the waste has been taken care of. As the beil accident showed, cpcb's guidelines that existed before the new ones, like mandatory labelling of drums, were not enforced.

"A disaster is waiting to happen at any of these facilities. None of them is following the guidelines for fire fightng," said a cpcb official who did not want to be identified. "Unless we issue them directions nothing will happen. But directions have to come from the top."

Technically, organic hazardous waste with a calorific value above 2,500 kilocalorie per kg is to be incinerated because it cannot be recycled, reused or safely dumped in a landfill. Waste oil, spent solvents, waste from pesticide, pharmaceutical and refinery units falls in this category.The calorific value of the waste affects the temperature in the incinerator, therefore to maintain the right temperature the waste has to be mixed in the right proportion. But is incineration being done as per rules?

At Nandesari industrial complex in Vadodara, the incinerator was emitting black smoke and was switched off when the Down To Earth team entered its premises. gpcb reports in June 2007 observed only liquid, not solid, waste was being fed into the gepil incinerator in Surat. "Solid waste has to be combined with liquid waste before incineration. It needs more secondary fuel (like light diesel) to burn which is expensive, so probably tsdf operators delay burning it," said Shyam R Asolekar, head of the Centre for Environmental Science and Engineering at iit Bombay. "It is very difficult to know if they are dumping the incinerable solid waste as well in the landfill. Who can check?" asked Sheikh of Brackish Water Research Centre. cpcb officials say they can't be present inside a tsdf 24 hours.

Ideally, dioxins, furans, heavy metals like mercury, a neurotoxin, and other ambient air parameters should be monitored at the incinerator chimney at least once in six months (see Check it). But only sulphur and nitrogen dioxides and particulate matter are checked regularly because there is not enough facility to check other parameters. Even after the beil fire, dioxins and furans were not measured in the air, for lack of facility, while air samples for checking heavy metals had to be sent to a private lab in Mumbai. "Now we have set up a Trace Organics Lab at the cpcb head office in Delhi, where we can test emissions for dioxins and furans," said a board official. Testing one sample for dioxins or furans in Belgium costs Rs 40,000.

Waste dumped in a landfill is a problem because of its quantity. A landfill has to be lined with impervious material like concrete or special plastic to prevent the waste from leaching into the ground. "Waste needs to be checked for its toxicity before being dumped in a landfill but we do not have good labs for that. Everything is being dumped into the landfills," said Paritosh Tyagi, former chairman of the cpcb.

Once filled, a landfill is covered with soil and usually a green belt is maintained over it. tsdf operators have to monitor the chemicals leaching into the ground, gas and surface water till 30 years after its closure. "Nobody knows what havoc is wreaked underground by the toxic waste," said Nityanand Jayaraman of sipcot Cuddalore Community Environment Monitors.

Proper monitoring will require a bigger and better equipped team. "In one state board of Germany, there are 2,000 employees, while the technical staff of the pollution control board (pcb) in Karnataka, which is the size of Germany, the strength of technical staff is 260," said Jurgen Porst, senior adviser to the Karnataka pcb and member of German development cooperation gtz.

According to the 2008 report of the Parliamentary Standing Committee on Science and Technology, Environment and Forests, "A technical person in the Gujarat pcb spares 1.77 days to monitor an industry in a year...while in Maharashtra the person spends only 1.23 days a year. This includes time taken on travelling." According to the Supreme Court's monitoring committee on hazardous waste, 77 per cent chairpersons and 55 per cent member secretaries in state pcbs are not qualified enough to hold the post.