The demand for paper in India far exceeds its supply 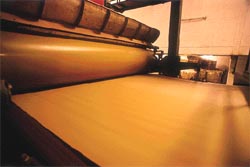 T he pulp and paper industry is one of the oldest industries in India: the first paper mill was set up as early as 1832 at Serampore in Hooghly district of West Bengal. But in terms of production capacity, the industry remains very small. The mills have an aggregate capacity of 3.8 million tonnes per annum (tpa). But the effective capacity is only 2.6 million tpa, because many of these mills are sick. In the newsprint segment, the total capacity is around 0.45 million tpa, of which 73 per cent is dominated by four major public sector mills, while the rest is shared by 14 small players.

By international standards, India is a very low producer and consumer of paper. The country's per capita consumption of paper in 1995 stood at a meagre 3 kilogrammes (kg) as against the global average of 45 kg, with the us , western Europe and Japan accounting for 30 per cent, 20 per cent and 12 per cent respectively of the total demand. Compared to its population of over 900 million, India's total paper and paperboards requirements forms a marginal 1.25 per cent share in the global market.

The aggregate capacity of the Indian mills is not enough to meet the demand. Even pulp is in short supply and it is usually imported. The demand for paper was expected to go up to 4 kg by the year 2000, but according to a 1999 survey done by Protech India, a market surveyor, India has already reached that figure. By 2010, the demand for paper is expected to touch 6 million tpa, with an extra demand of 1.6 million tpa for newsprint. But even that is negligible compared to its Asian counterparts, whose demands have already more than doubled. For instance, China's current consumption is 14 kg per person. This is expected to rise to 20 kg by 2000. Similarly, East Asia's paper consumption has zoomed to 200 kg per year, from less than a tenth of this figure two decades ago. Even the average per capita paper consumption in Asia (18 kg) is six times higher than that of India's.

In the last 10 years or so, due to environmental concerns, considerable modifications have taken place in production and disposal processes in the global pulp and paper sector, especially in developed European and North American countries. However, to make these investments economically viable, an expansion of capacity has to be included due to the economies of scale. The problem of size plagues the India industry. Government estimates put the total number of mills in India at 340, but according to Protech India there are as many as 679, mostly small-scale mills. A mill with a capacity of 33,000 tpa is considered large in India, compared to Brazil and Sweden where the largest mills have a capacity between 300,000 to one million tpd. This poses potential financial problems for upgrading technology to reach international environmental standards.

About 30 mills fall in the large-scale category in India, followed by 80 medium-sized mills. The rest are small mills which are agrowastes and wastepaper-based and the major problem is with these mills and their small capacity. Though these mills meet one-third of the total paper and pulp production, they account for 60 per cent of the pollution load discharged by the total pulp and paper mills. The size of these mills give little scope to invest in pollution abatement equipment.