Industries from far and near dump untreated toxic effluents near Ulhasnagar, choking a river and sickening people 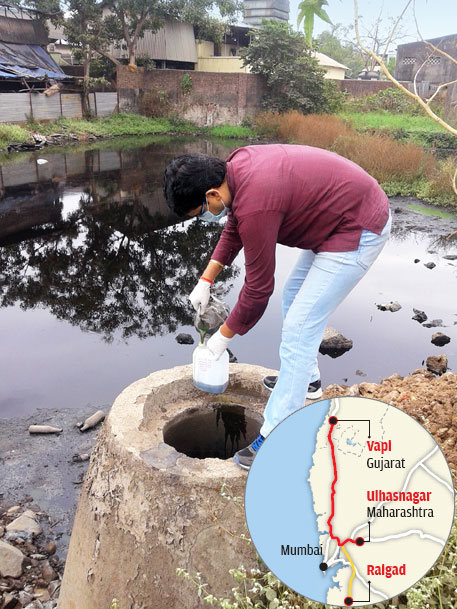 It was a RUDE reminder of the Bhopal gas tragedy. In the early hours of November 29, residents of Vadol village near Maharashtra’s Ambernath industrial area woke up to a strong stench. More than 300 people living around a nullah started throwing up, felt dizzy and complained of uneasiness, breathing difficulties and headache. Some had to be immediately rushed to the Central Hospital in nearby Ulhasnagar city, while many others were evacuated from the area. The stench was coming from the nullah, which joins a tributary of the Ulhasriver. A tanker had dumped untreated industrial effluents into the nullah the previous night.

The incident made it to national news and prompted the state secretariat to call a closed-door meeting on December 1. Officials present at the meeting did admit that such incidences are becoming frequent in all the three industrial areas—Ambernath, Dombivli and Badlapur—along the Ulhaas and its tributaries. But there was no consensus between the police and the pollution control officials on who should guard against such happenings. Following the meeting, Medha Gadgil, principal secretary (environment) of the state, told the media that the government plans to track and document all tankers passing through the state. This gives credence to an old allegation that industries in Gujarat, particularly in Vapi, send effluents to be dumped in Maharashtra. People living in and around the industrial areas have, however, little hope from the Maharashtra government.

The three industrial areas, set up by the Maharashtra Industrial Development Corporation (MIDC), are home to some 1,200 industries; most of them are highly polluting chemical and textile units. “People in and around these areas, young or old, regularly suffer from throat and eye irritation, various infections, fever and headache. It has become a way of life for us,” says Rashmi Yeole, president of MIDCNiwasi Mahasangha, a residents’ welfare association.

For the past two decades, the association has been requesting Maharashtra Pollution Control Board (MPCB) to contain leakages from pipes that pass through their colonies carrying industrial effluents and to prevent industries from dumping waste in the river and its tributaries. “But our repeated pleas have fallen on deaf ears,” says Rajeev Nalawade, a retired MIDC worker who lives in Dombivli industrial area.

Tony Sirwani, a corporator from the area, told the media that almost every day at late night residents would get the strong stench, which alerts them of tankers dumping industrial effluents in nearby areas. Lately, they have formed groups to guard the area. One such group, according to Sirwani, has identified a spot in Vadol, where the tanker mafia have installed a pipe to directly release industrial effluents into the river. A couple of days prior to the incident in which 300 people fell ill, another group of residents apprehended a tanker as it was dumping effluents. But the police allegedly asked them not to detain or film the tanker. Though deputy commissioner of police VasantJadhav denies such media reports, a local tabloid published the images of the tanker.

Both residents of the industrial estates and social organisations blame MPCB for the highly polluted state of the Ulhas. A study published in International Letters of Chemistry Physics and Astronomy early this year states that textile and dying industries are polluting the Ulhas in a serious way. Researcher P U Shingare of Chemistry Department of Bhavan’s College in Mumbai, has found disturbingly high levels of heavy metals, cyanide, phosphate, and very low dissolved oxygen in the river.

According to non-profit Vanashakti, which analyses water quality of the river once in every few months, the chemical oxygen demand (COD) of the river varies between 50,000 mg per litre (mg/l) and 90,000 mg/l, against the maximum permissible limit of 250 mg/l.

COD indicates the total amount of chemicals present in water. Biochemical oxygen demand (BOD), which indicates organic pollutants, is more than double the permissible limit. “We sent the reports to MPCB several times, demanding that water quality be assessed by an independent agency. But it ignored our request,” says Ashwin Aghor, project officer with Vanashakti.

In November 2013, Vanashakti moved the National Green Tribunal (NGT), accusing MPCB of allowing polluting industries to operate. NGT in its order asked MPCB to identify and close down all polluting industries in MIDC. “But MPCB overruled NGT ruling and allowed the erring units to resume operations within 25 days,” says D Stalin, director (projects) of Vanashakti.

In September this year NGT asked MPCB about its initiatives to clean up the river. MPCB, instead of providing details of its performance, tried to put the blame for the pollution on Ulhasnagar Municipal Corporation (UMC). In its affidavit, MPCB informed that of the 90 million litres a day (MLD) sewage generated by the municipal area, UMC discharges 10 MLD without treatment through Khemaninullah into the drinking water zone of the Ulhas. The remaining sewage is directly discharged through a nullah into the Waldhuni, a tributary of the Ulhas.

At the same time, alleges Stalin, MPCB worked overtime to stall NGT’saction against the industries. “Effluents treated at CETP have the COD of 250 mg/l, BOD of 100 mg/l and a neutral pH. But MPCB imposed these standards on industrial units. These units can never achieve the standard with the help of their primary water treatment plants. So they went to the high court and stayed the NGT order,” Stalin informs. He adds that no MPCB official or counsel present in the court objected to the stay, which suggests that the move was choreographed to favour industries. Stalin has written to Chief Minister DevendraFadnavis, demanding suspension of MPCB member secretary Rajeev Mittal and all officials of its regional office at Kalyan.

NitinShinde, sub regional officer of MPCB-Kalyan, admits that tankers release industrial effluents into the waterways, but says MIDC industries are not responsible for this.

Dump yard for all

“These tankers come from outside,” says Shinde. “All 38 effluent-generating plants in Ambarnath industrial estate have primary water treatment plants, and the CETP is functional. So they have no need to resort to these tactics.” Shinde adds that illegal denim washing units are polluting the river. MPCB is going to initiate action against them.

Residents around the industrial areas inform that an well-organised tanker mafia is involved in bringing industrial effluents from far away areas, such as Vapi in Gujarat and Mahad and Khopoli in Raigad, Maharashtra, and dumping it in Ulhasnagar. They, however, trash MIDC’s claim that the local industries are not at fault. “None of the CETPs in the three industrial estates are functioning properly. These industries dump the untreated effluents quite openly,” says Yeole, “You have to visit nullahs near the industrial areas to see this—the stench is unbearable.”