Who cares for black bucks, we want tourists

Who cares for black bucks, we want tourists 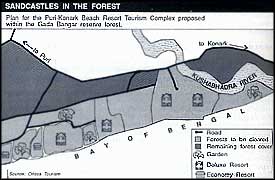 THE ORISSA government's ambitious plan to develop a beach resort complex over more than 900 ha between Puri and Konark has raised a storm of controversy in the state. While environmental activists allege that the project will cause irreversible damage to the ecologically fragile coastal stretch, officials of the state tourism department, who have drawn up the proposal, argue that they have included the costs of environmental damage in the Rs 862 crore plan.

The main environmental objection against the resort is that it will lie squarely within the Gada Bangar reserve forest, which forms part of the Balukhanda-Konark sanctuary. The sanctuary is home to eight animal species, including two that feature on the endangered and rare species list: the black buck and the monitor lizard. Also, most of the trees in the region have been planted as part of afforestation policies aimed at checking the erosion of the fragile coastline.

But on the basis of the financial benefits anticipated in the tourism department's project report, the Orissa government has made out a strong case for the declassification of the Konark-Puri beach from its present status within the Coastal Regulation Zone (CRZ) I (defined as "ecologically sensitive" areas by the Union ministry of environment and forests (MEF), where all civic construction is banned) to the category of CRZ-III, where construction is permitted upto 200 metres of the high tide line. Also, the state tourism department has already put forward its proposal to dereserve the forest to the MEF.
The tourism department's proposal enjoying the personal backing of chief minister Biju Patnaik, does include environmental costs totally valued at Rs 564.4 crore. It estimates this figure by extrapolation over 50 years after work on the project is begun of annual losses through soil erosion, changes in the hydrological cycle, microclimatic changes and other environmental changes, valued at about Rs 11.3 crore annually.

However, enquiries by Down To Earth reveal that no compensatory investment for this environmental loss has been planned for. In real terms, thus the tourism department has planned for an investment of only Rs 297.6 crore. Yet, the state environment secretary, H S Sarkar, says, "We have cleared the scheme without any reservation".

Meanwhile, the green lobby has received a boost from reports that the MEF has not taken kindly to the project. In fact, Patnaik has already charged the MEF with "stifling the development process (in the state) through irrelevant objections".
MEF sources say the ministry will take any action only after the final report on the project's environmental aspects has been submitted by the inspector-general of forests who visited Orissa in late August.

However, the sources reveal the project enjoys considerable support among certain quarters of the Union government, in particular, the Union tourism ministry. Last July, the ministry had reaffirmed its intention to develop the Puri-Konark beach as a 'special tourism area'. The Sun Temple at Konark is already a favourite tourist spot, but its main porch is in a state of disrepair. If renovated and thrown open to the public, the main porch will be a major attraction for tourists (See box).

The beach resort plan envisages a complex replete with modern recreational facilities such as water sports, court games, golf courses, discotheques and production-cum-sale parks for ethnic ware such as jewellery, clothes and mud toys. The scheme also proposes an 'artisan village', a school for performing arts, and helipads and modern telecommunication centres. The current controversy was given more impetus by the fact that in recent days, several leading Indian and multinational firms, including hoteliers and industrialists, have made a beeline to Bhubaneswar to bid for large plots of land. Notable among the bidders are the Tatas and Thapars, who have reportedly applied for 121.5 ha each.The project will be implemented in two stages with the first stage envisaging a series of hotels that would together provide 900 deluxe rooms, meant primarily for foreign tourists, and 600 economy rooms. The state tourism department estimates that the hotels would bring in revenue worth Rs 2,000 crore in the first 10 years itself. This includes Rs 800 crore anticipated from the hotels and more than Rs 365 crore as socioeconomic benefits through jobs and sale of indigenous and local products.

But Balasore-based Nilimoy Mohanty, who has been active in several environmental campaigns in his own and surrounding districts, says, "The financial projections of the Orissa government seem unreasonably optimistic in the face of the disappointing performance of the Indian tourism sector as a whole." The Rs 564 crore of the total estimated cost for the project that has been earmarked for environmental regeneration is assumed to come from tourism revenue. But Mohanty points out that nobody in the state government is willing to say what will happen if the project fails.

However, as Mohanty points out, "the mechanism by which these heads have been costed is known only to the officials". He admits that even the environmental activists have only hazy notions about the adequacy of this sum for the environmental degradation the resort will cause.


Environmentalists point out execution of the project will inevitably lead to extensive deforestation and undo the effects of previous conservation efforts to check erosion along the coast. They say crores of rupees have been spent since the late 1950s to afforest the fragile Orissa coast from Balasore to Puri. This effort has not only checked erosion along the coastline, but also protected the inhabitants from high tides and cyclones.

Says Banka Behary Das, one of the first environmentalists to oppose the resort, "Look, I have no grouse against hotels or any other so-called development activity in itself, but I will spare no effort to make the concerned authorities realise how ridiculous the project is." On the basis of state forestry department figures, Das has estimated that just the initial stage of the project will necessitate felling of 5.2 lakh trees and total clearance of 8 sq km of the sanctuary. This, in his opinion, will further expose the denuded coastline to erosion. Das points to the litter on the Puri beach and prophecies the same fate for the Konark beach.

But state tourism director S B Agnihotri dismisses Das' argument and says the beach resort plan carries environmental guidelines, including proposals for groundwater withdrawal and effluent and waste treatment. "These guidelines will be adhered to strictly," he asserts.

Agnihotri admits the area earmarked for the project has 4.7 lakh casuarina trees that were planted specifically to stop the shifting of sand-dunes, but says the hoteliers are expected to preserve as many of these trees as possible during construction. However, the Hotel and Restaurants Association of Orissa (HRAO), which has emerged as the most vocal lobby for this group, flatly denies any responsibility for looking after the trees or for planting any more.

State tourism minister A U Singh Deo refers to the stipulation that permits construction on only 33 per cent of the allotted area and says, "There will be at least 2.5 lakh trees left, and these will be sufficient." State environment secretary Sarkar talks about a scheme of compensatory afforestation for 10 selected villages. But all these reassurances are greeted with cynicism by middle-level forest officials who ask, "Who will do the actual planting. The forest department is always short of staff and infrastructure and is unwilling to shoulder the additional responsibility." And asks Das, "Which hotel in India would like casuarina trees on its lawns?"

But so determined is the pro-project lobby within the state administration, it has already launched informal initiatives to seek an alternative site for the project to counter a negative response, if any.