Government clueless about the Bill it introduced 12 years ago to govern urban areas in tribal regions. Constitutional crisis follows

On May 7, the Supreme Court dismissed a petition demanding that tribal-dominated Sundargarh district of Odisha be kept out of the purview of the Orissa Municipal Act of 1950. The petition, filed by Sundargarh Zilla Adivasi Advocate Association (SZAAA), contended that the Act was not applicable to Sundargarh as the district was listed under the Fifth Schedule of the Constitution.

The Fifth Schedule of the Constitution mandates laws separate from the Panchayati Raj Act and the Nagarpalika Act to administer villages and towns in tribal-dominated areas. Parliament enacted the Panchayat Extension to Scheduled Areas (PESA) Act in 1996 for rural tribal areas. But a similar legislation for urban tribal areas—the Municipalities Extension to Scheduled Areas (MESA), 2001, Bill—was not enacted.

An investigation by Down To Earth shows at least 181 municipalities are functioning unconstitutionally in scheduled areas of seven states (see ‘181 illegal civic bodies’). 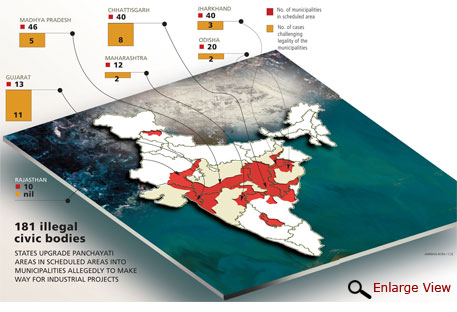 “This has created a governance crisis and paved the way for state governments to undermine traditional rights of tribal people,” says Celestine Xaxa of SZAAA. He plans to file a review petition in the apex court. Just a month ago, in April, the apex court dismissed a batch of similar petitions by tribal rights activists from Jharkhand. It declared their challenge “infructuous” on the ground that the Jharkhand government had repealed the municipal Act they had challenged and introduced a new Act in 2011. The activists now plan to challenge the new municipal Act of Jharkhand.

In the past few years tribal rights activists have filed 31 cases against different urban local bodies, calling them illegal. They have also sued state governments for illegally implementing the municipal Act in scheduled areas. Their concern is that state governments are taking advantage of this parliamentary lapse to give speedy clearances to mining companies and industries in resource-rich scheduled areas. The municipal Act has no provision to protect the traditional and cultural rights of tribals over their land, forests, minerals and other natural resources as granted under the Fifth Schedule of the Constitution. As per the provisions of the Fifth Schedule no land in scheduled areas can be transferred to non-tribal people and no project can be set up without the community’s approval.

That is not all. C R Bijoy of Campaign for Survival and Dignity, a non-profit in Delhi, says state governments are upgrading the panchayati areas within the scheduled area into municipal areas and are taking the areas out of the purview of PESA provisions, which mandate village council’s approval for setting up any project. Worse, they are doing so without providing alternative protective provisions to the municipal areas. This is creating legal infirmity, Bijoy adds. As per the 1991 census, there were 167 urban local bodies in Schedule Five areas. Their number has increased since. Between 2007 and 2009, Chhattisgarh and Madhya Pradesh upgraded 26 and eight tribal rural areas into municipalities, and these are the areas with major industrial investment proposals.

Alok Pandey of PRIA, a Delhi-based non-profit that works on local governance, cites another reason for such upgrade. Before the general election of 2009, the Chhattisgarh and Madhya Pradesh governments upgraded 79 and 100 panchayats, respectively. A major reason behind this is to get more Central allocations from the Ministry of Urban Development. State governments are not serious about urban local bodies because 90 per cent of them are run by ad hoc officials, he says.

Jayant Verma of Bharat Janandolan, a Delhi-based non-profit, says panchayati regions are being converted into municipalities flouting all criteria. The criteria for upgrading a panchayat into a nagar panchayat is that it should have a population of at least 10,000 and most of its residents must be involved in certain non-farm activities. Bijoy says there is a need to rectify this constitutional crisis at the earliest by introducing the MESA Bill drafted for urban tribal areas.

The MESA Bill was prepared based on the recommendations of the Bhuria Committee, whose report had paved the way for the PESA Act for tribal rural areas (see ‘Genesis of the lost Bill’). 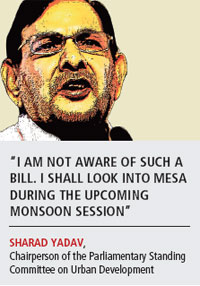 The Bill aims to protect the land rights of tribals and provides for a standing committee on tribal affairs in each municipality. It was introduced in the Parliament on July 30, 2001. Later, it was referred to the Parliamentary Standing Committee on Urban and Rural Development, which recommended its adoption in November 2003. Till the monsoon session of 2010, the Bill was enlisted for discussion every session. But no one knows what happened to the Bill after that.

“I am not aware of such a Bill,” Sharad Yadav, chairperson of the Parliamentary Standing Committee on Urban and Rural Development, told Down To Earth. “I shall look into MESA during upcoming monsoon session.”

When asked about the Bill, Kanaiya Lal, deputy secretary for Parliament Coordination in Urban Development Ministry feigned ignorance, while Sudhir Krishna, secretary of the ministry, refused to comment.

S M Vijayanand, additional secretary of Ministry of Rural Development, said his ministry had given its suggestions on the Bill during the inter-ministerial consultation. But that was done many years ago. It would be difficult to comment on its status now. 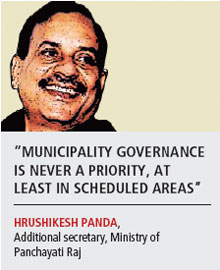 Hrusikesh Panda, additional secretary, Ministry of Panchayati Raj, also says no one knows whether the Bill was enacted or withdrawn. “Municipality governance is never a priority, at least in scheduled areas,” he says, adding that his ministry had given its suggestions on MESA during the inter-ministerial consultation.

The Planning Commission has pointed out this void in its reports from time to time and stressed for proper implementation of the provisions of Fifth Schedule of the Constitution in countering Left-wing extremism.

Dileep Singh Bhuria, who headed the Bhuria Committee, had also written to the prime minister for urgent need of introducing MESA. He received a letter from the urban development ministry, on the direction of the Prime Minister’s Office, assuring him that action would be taken in this regard. But that was three years ago. 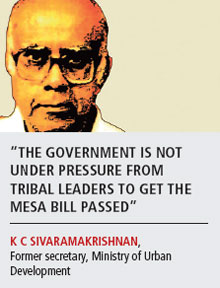 K C Sivaramakrishnan, former secretary of the Ministry of Urban Development, blames the void on the sheer apathy of the government. Sivaramakrishnan played a key role in bring about the 73rd and 74th amendment of the Constitution, which led to the decentralisation of governance through local bodies. He says there has to be a lot of pressure on the government to pass any legislation. There is no pressure from tribal leaders to get the MESA bill passed.

Until the Bill is enacted, says tribal rights activist from Chhattisgarh B K Manish, people should knock the court doors to keep scheduled areas out of the purview of the municipal Act. Citing the dismissal of petitions by SZAAA and tribal rights activists from Jharkhand, Manish says they were rejected because they were poorly argued.

But in the absence of legislation, the judiciary can only provide a temporary respite. In 2009, the High Court of Jabalpur stayed elections to urban local bodies in scheduled areas of Madhya Pradesh, saying the state municipal Act was not applicable to them. It also directed the Centre to pass a suitable legislation for extending municipal bodies to scheduled areas (see ‘Crisis of governance’, Down To Earth, December 16-31, 2010). “The judgement was cancelled later because the court believed that in the absence of Central legislation, the election process should continue,” says Amitabh Singh of Debate, a non-profit in Bhopal.

The Fifth Schedule Areas were carved out to protect the traditional and cultural rights of tribal people. But with growing urbanisation and migration of non-tribal people to scheduled areas, the demography of scheduled areas is changing. This is giving rise to conflict of interest between the tribal and non-tribal people. “Often laws are being manipulated in the interest of non-tribals,” says Verma. Usha Ramanathan, a law expert and rights activist, says scheduled area has more of a geographic connotation than proximity of tribal population living in these areas. Thus even if migration occurs due to urbanisation and industrialisation, all the procedures to protect tribal culture and life are to be followed. She calls for implementation of MESA at the earliest. The National Advisory Council (NAC), led by ruling United Progressive Alliance chairperson Sonia Gandhi acknowledged the crisis on December 31, 2012. In its draft report, the NAC Working group on Scheduled Areas has recommended the Centre to take steps to introduce the revised provisions of the MESA Bill at the earliest in such a manner that the interests of schedule tribes are not affected.

One can only hope that the MESA Bill does not get dropped from list of business when Parliament meets in July.