Many vegetables put together make a yummy dish called eronba 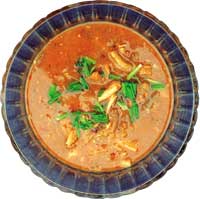 Manipur is the paradise of wild edible plants. The traditional delicacies made out of these plants are nutritious (full of minerals) and do not need oil or many spices to taste good. Eronba is one such dish that is often eaten along with rice. It is prepared from a number of locally available vegetables like Alpinia nigra (called pullei in local parlance), Hedychium spicatum (loklei), Ammomum aromaticum (namra), Eryrale ferox (thangjing), Alocasia species (yendem), Colocasia species (pann), Neptunia oleracia ( ikaithabi ) and Parkia roxburghii (yongchak). Banana and fermented bamboo shoots (soibum) can also be used; addition of fermented fish is considered necessary by many people. Eronba may also be prepared without fermented fish, using fried red chillies only. This variety is usually consumed during festivals.

Depending on the combination of vegetables, eronba is called by various names like soibum eronba (having a base of fermented bamboo shoots), yongchak eronba ( yongchak- based) and yendem eronba (alocasia -based). Rice along with eronba can become a favourite meal of anybody throughout the year.

Alka Jain is a research associate and H Birkumar Singh is a scientist with Regional Research Laboratory, Council of Scientific and Industrial Research, Manipur