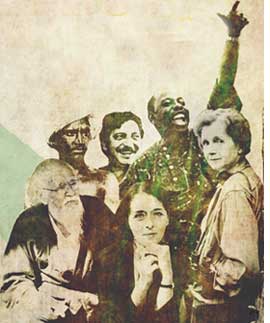 There were environmentalists long before June 5 became Environment Day in 1972. And they haven't had it easy since environment became an acceptable term and the UN created a bureaucracy under it. We take this opportunity to remember them

Led the people of Chhotanagpur plateau to assert their rights over their land. Died mysteriously in 1900 in a British prison. Icon for tribals struggling across India for their land and forests.

Began as a labour leader in Brazil, defending poor rubber tappers against rich ranchers. Soon, he was fighting to save the Amazon rainforest. Killed in 1988 by ranchers. There still are some rainforests left.

Fought Nigerian government and oil companies like Shell for polluting the lands of the Ogoni people. Hanged in 1995 for his non-violent struggle. Nigeria is one of world's top oil producers.

Silent Springs, her 1962 book, changed the way the world saw pesticides and industrial chemicals. The marine biologist faced a sea of opposition from companies like DuPont, the maker of DDT.

In 1978, the housewife learnt that her locality, Love Canal in Niagara Falls, New York, was built on a toxic waste dump. Led the community to demand evacuation and cleanup of Love Canal.

It took a microbiologist in Japan to show small farmers are not stupid. His books, especially The One Straw Revolution of 1978, have inspired farmers across the world to go organic.