Supply from agriculture and forests is dwindling

Tejpal Mehta, former sarpanch of village Dighariya, is well known all over Thana Gaji tehsil of Rajasthan’s Alwar district because he is among the rare few who possesses 100 milch animals, both indigenous and crossbred.

He also owns eight hectares (ha) of land. But that does not seem enough in the times of water—and therefore fodder— scarcity. “If the yield is good, I get about eight tonnes of fodder annually. The additional 12 tonnes that I need, I buy from the market,” said Mehta.

The fodder that cost Rs 50 for 100 kg about 10 years ago was hardly available even for Rs 800 a quintal about six months ago, he said. Rs 5-6 per kg is the standard rate for wheat or bajra straw anywhere in Rajasthan at the time of harvest. In Gujarat, it varies from Rs 4-5 while in Maharashtra from Rs 4.50-5.50 per kg.

Why is it so? “Try to see the big picture. The groundwater level has gone down below 150 m. The crop yield is not as good as it used to be. Where will the fodder come from?” Mehta asked. “Because of lack of water, we can’t grow green fodder even. Then there is the prohibitive cost of seeds.” A kg of Lucerne (alfalfa) seeds, a leguminous green fodder, costs Rs 300, Mehta said. “So you can imagine the sowing costs when one acre requires 30 kg of seeds,” he added. Ideally, 25 per cent of animal feed should comprise green fodder, he said. “But my animals do not get any more than 2-3 per cent green fodder,” he added.

“At the end of a typical day, I sell 1,200 litres of milk at Rs 5,400,” Mehta said. It’s a daily loss (see: Statement of loss). “We recuperate only when a calf is born as they start giving milk within two years in case of a Holstein.” Mehta would like the government to open depots where fodder is provided at subsidized rate. “Otherwise our animals will all die in five years,” he said. It is a different story in Haryana and Punjab. Technology is one reason fodder prices shot up here. More and more farmers today hire combine harvesters.

“The harvester slices off the top end of the wheat plant that has the grains, leaving the large part of the stalk standing on the field,” said Sharmila of Burheda village in Gurgaon in Haryana. “We have to ask the harvester-wallah to do a second round of cutting if we want the fodder. For this he charges Rs 100 for 100 kg. Even then a lot remains on the field which is burnt,” she added.

In Punjab too the straw left over by combine harvesters is burnt. One of the largest producers of dry fodder, the state has banned burning of crop residue, but that seems to be only on paper. Gathering the fodder does not make business sense. There is no profit to be made after paying for labour costs to cut and bundle the fodder and then to transport it to other states. Only those farms that do not use Combine harvesters keep the fodder market going.

Across the border in Hadota village in Chomu Tehsil of Jaipur is what is reputed to be the largest wholesale fodder market of Rajasthan. About 70 trucks come in every day to sell fodder at Chomu. When the Mandi opened 20 years ago there were just 20 trucks coming in.

Truck drivers complained they are routinely fined by the traffic police for overloading. “After discounting the diesel cost and fines, we hardly get about Rs 2,000,” said Joginder Singh from Kaithal in Haryana. “We would have made a loss if we were not buying vegetables from Chomu (Rajasthan’s largest wholesale vegetable market) and selling them back home,” he said. In 2005, the central government started by giving 25 per cent subsidy to entrepreneurs for fodder block (balesmaking units) to encourage movement from areas of surplus to areas of deficit.

This has now gone up to 50 per cent. “Trucks can transport only about four tonnes of fodder but if briquetted, it can go upto 10 tonnes,” said an official of the Central Animal Husbandry and Fisheries department.

As per a 2007 study by NABARD Consultancy Services, there is a 36-57 per cent gap between demand and supply of fodder in the country. The 10th Five Year Plan projected the demand for green fodder in 2010 to be 1,060 MT. “The greatest concern today is that there are no reliable statistics, be it dry or green fodder or concentrates. Whatever data is available is of the 2003 livestock census and every policy initiative is taken up from there,” NDDB’s Patel said.

Patel is worried many farmers are now moving away from cereal crops that yield fodder because there is more money elsewhere. “Farmers in Mehsana, which has the largest milk cooperative in Gujarat, are switching to potato because fast food chains want a particular variety of potatoes to make French fries. Then there is tobacco cultivation too that is replacing cereal crops,” Patel said.

From what it appears, the falling groundwater level, modern farm harvester technology and India’s new economy are elbowing out fodder production. As the stall-fed dairy owners find it difficult to feed their livestock, pastoral dairy farmers’ battle for survival is becoming increasingly bitter.

Where are the grazing grounds?

Umrao Gujjar of Shiliberi village in the buffer zone of Sariska National Park in Rajasthan’s Alwar district has to bring his 15 buffaloes outside the forest area as grazing is not allowed there any more. “In the summer months, we take our cattle to Uttar Pradesh for grazing,” he said. Life was not so hard earlier; both the forest and the hills were kind. “There would be enough grass on the hills in winter, but now even that falls inside the forest,” Gujjar said.

According to National Forestry Action Programme of the Ministry of Environment and Forests, around 60 per cent of the livestock (about 270 million heads) graze in forests; this is nine times the carrying capacity of 30 million animals. Sunandan Tiwari of Winrock International India, non-profit that is providing technical inputs for a National Integrated Grazing Management Policy, said: “There are traditional rights of communities to collect fodder and then there is grazing too. But at the state level there has been no comprehensive estimation of the carrying capacity of the forests.” 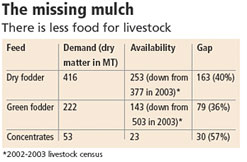 In Gujarat, the famed grasslands of Banni in Kachchh have been taken over by the weed Prosopis juliflora. Banni is a flat stretch of land with the Greater Rann of Kachchh on one side. It takes a long time for the water to drain out during monsoon. “Our king designated this land for use by cattle and not agriculture because of the fine grasses that grew here,” said Salim Bhai, sarpanch of Navi Sargu hamlet, about 37 km from Bhuj. “In Banni, no one ever imagined a day would come when we would be buying cattlefeed,” said Salim Bhai. At present, they buy cotton Binola for their animals at Rs 13 per kg.

Gando bawal (mad tree, literally), as juliflora is called in the region, has spread far. “Earlier, grass here was so tall that a man on horseback would be hidden from view. But this tree has destroyed everything,” said Nabib Bhai of Navi Sargu. Nothing grows under it and buffaloes develop ulcer and lock jaw after eating its pods, he added. “The forest department does not let us cut it because it shows a green cover from satellites,” Nabib Bhai said. Grasses have given way to barren land as 65 dams built on rivers around Banni have stopped water from reaching the area.

In Zarapara village, on the other side of Banni, in Mundra taluka, the struggle is of a different kind. The sarpanch here sold nearly 650 hectares (ha) of common grazing (gauchar) land in the village to Mundra Port and SEZ. “The sarpanch told the collector there are hardly any cattle in the village. But that is not true; there are 8,773 heads,” said Valjibhai M Tapariya, BJP leader from Mundra. The Zarapara gram panchayat has filed a case in the high court.

As per Gujarat government norms, there should be 16 ha grazing land for every 100 livestock heads and 8 ha in a forest area. In 2003 the deficit was about 75 per cent, wrote Charul Bharwada and Vinay Mahajan in a paper titled Quit Transfer of Commons in Economic and Political Weekly (January 28, 2006). “If the more than one million ha wasteland in the state is developed as grazing land, the deficit can be covered to some extent. But this land is being given to industry at throwaway rates,” said Bharwada, architect-planner who has been studying pastoral communities at Sandarbh Studies, non-profit in Ahmedabad.

Soil is regularly being mined from the gauchar in Zarapara to reclaim the sea at the Mundra port. “There are about 700 families who have no land and depend solely on the gauchar. But now, they are moving to other jobs like that of chauffeurs or labour for the company,” said Ashanand Ghadvi, schoolteacher in Zarapara village. Lack of fodder is changing their way of life.

The cost and benefit of a crossbreed cow according to Hemant Kumar, dairy owner in Alwar 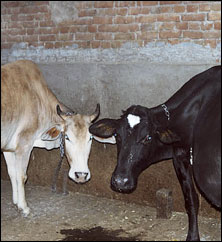 Cows crossbred with foreign breeds like Jersey and Friesian Holstein were introduced in India in the 1970s. “They give more milk but require more to eat,” said Hemant Sharma, a dairy shop owner in Alwar district. “In the 1970s, there was a blanket recommendation to crossbreed cows with foreign species which led to our own hardy species disappearing,” said Anil Kumar, senior scientist at Indian Grasslands and Fodder Research Institute in Jhansi.

“In Orissa, people took up crossbred cows after the cyclone but the straw available was too little for the heavy eaters,” said N R Bhasin of Indian Dairy Association. NDDB is working out a breeding policy exploring crossbreeding with hardy Indian breeds. It has started a breed improvement programme in Rajasthan and Gujarat.