Why save the rooster?

In 1996, about 14,000 million tonnes of meat came from the chicken alone. Rare indigenous breeds are extremely hardy and provide more protein and nutrition. Research on them is the need of the hour

Why save the rooster? 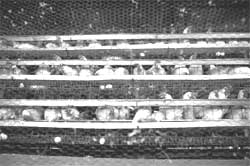 Unfortunately, it is not just rjf that is suffering from neglect. There are 20 desi or indigenous fowl breeds in India, all of which possess unique characteristics. Aseel , meaning true or real, an aggressive bird known for its fighting abilities has now become extremely rare and is found only among fanciers. Naked neck and Frizzle fowl, which can adapt themselves to extreme heat, are other indigenous breeds. Besides there is Ghagus, Ankaleshwar, Brown desi and Daothigir. But most of these indigenous birds are considered endangered and on the verge of extinction (see box: Blacked out ).

While the number of native stocks dwindle, the poultry industry in India is only concerned with further expansion and short term economic dilemmas in the expanding global market (see box: Poultry mess ).

The importance of the species is clear: it represents an extremely rich gene bank for the species Gallus gallus , and it is one of the rare ancestors of an important domestic species that is not exterminated up till now, agrees Pinceel. " The gene pool of the domestic races is becoming poorer and a new injection of genes, preserved in the wild ancestors, could be useful or even necessary to improve or to save our chickens," he says. "This stock must hold dozens of genes of import to improving poultry, and clearly would be of economic importance. The loss of the species will be unpardonable," rues Peterson.

"In India in particular, the rjf should be considered a saving grace," feels Satya Kumar. "We have an ever increasing poultry industry. Although this industry produces millions of eggs and tonnes of meat, the sanitary conditions are not very appreciable," he says. This could spell doom for the poultry industry as there is a strong possibility of poultry epidemics, like the one in Hong Kong in 1998, wiping out entire populations.

"Avian diseases are known to spread fast among birds and if this happens the entire poultry industry will be wiped out," he says. Then there will be no option left but to fall back upon the original breeds of chicken and most likely the rjf . "It is very essential that we conserve this bird," he adds. Besides, rjf is known to be possess resistance characteristics. It has also helped humans deal with the malaria. Studies of rjf infected by mosquitoes led to the development of the paludrine drug in the late 1930s. But with genetic contamination, India and the world stands to lose the single most important bird in the human world.