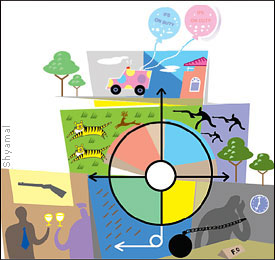 "Untouchability has not been eradicated from the country. There still exist classes of people who have to perform chores for their lords with unquestioning servility. Any attempt at protesting means a long exile in jungles with very little facilities for families of the banished," says a forest guard.

Forest and wildlife management are low priority for our forest managers. They have other imminent callings pleasing local political bosses, circumventing the Supreme Court ban on new rest houses in forests and discovering loopholes in the law, very often to facilitate mining in areas in the vicinity of wildlife sanctuaries.

The moment an ifs officer is posted in a forest circle, the whole machinery of the department is galvanised into locating a bungalow for him. The officer then starts scavenging up all forest rest houses in his jurisdiction for furniture, utensils, refrigerators and television. If there is no television, one is procured-- ostensibly for use in the forest rest house and is then conveniently added to the officer's drawing room.

Then the services of the executive staff are engaged to secure the officer's children's admission to the local school or college. If seats aren't available, other officers including those of the Indian Administrative Service flex their muscles and get space made. Vehicles purchased under Union government funds to protect the tiger from poachers are conveniently placed under the officer so that his children can go to school and his wife can go shopping.
But then, one might ask aren't the lower executives sufficient enough to protect the tiger? No. Recruitment of forest guards, foresters and range forest officers is among the lowest priorities in all forest departments. Lower-level forest personnel number exactly what they were 25 years ago. There has been little or no recruitment in the last 10 years for these posts. The average age of the forest guard in sanctuaries is over 55 years.

Forest guards prefer city postings to forest areas because of minimal facilities in remote areas. The forest quarters in these areas are barely-maintained. Most of the funds for maintenance are diverted for rest houses and for furnishing the quarters of ifs officers (these are usually camouflaged under office or rest house repairs). So, it's little wonder that our wildlife sanctuaries are poorly manned. The vacant beats are allotted to existing staff as additional duties without extra remuneration, consequently each forest guard has to protect three or four beats covering over 40 sq km. The guards have no vehicles and are expected to patrol on foot with nothing more than a cane stick.

The state governments care little for the forest executive staff their plight is never brought to the notice of the government by the ifs officers.Moreover, recent rulings of the Supreme Court against conversion of forestland for non-forestry purposes (including development of roads, water canals) are enforced by the higher ups but forest guards and range forest officers become easy targets for politicians in front of their vote banks.


All this while, the number of ifs officers is increasing. These officers have taken advantage of their job as policy makers by creating vacancies and posts at higher levels. So the forest department has become top heavy--there are more managers than workers.

But the last recruitment for the post of range forest officers was done way back in 1984. The same is the case with the posts of forest guards and round foresters.


The creation of new posts for ifs officers is an amazing, but simple story. In Goa, when the conservator of forests was the head of the department, he had the added responsibility of ex-officio secretary to the government. In a proposal submitted to the government for the creation of a chief conservator of forests (ccf), he recommended that this post be that of a joint secretary in the state secretariat. The ccf had to liaise between the state forest department and the government and the post could have been filled up from the existing ifs posts in Goa, without adding to the financial burden of the state. But once the government approved of this new post, the number of other ifs posts increased.

Moreover, due to wrong transfer policies, the state once had two ccfs. So it conveniently upgraded the post of managing director of Forest Development Corporation to this rank. Similarly when the state had two conservators of forests, one was conveniently placed as officer on special duty in the electricity department.

When an ifs officer is transferred from the state, the vacant post is immediately filled up, but the transferred officer continues to draw salary from the state. While ifs officers make every effort to promote their own tribesmen to higher posts even in the absence of vacancies, they resort to red tapism in the case of the executive staff quoting rules and absence of definite vacancies.

When the lords are behaving thus, how can one expect the lower staff to remain alert to protect the tiger? Yet, let any newspaper or the public complain about the forest department, the same ifs officers will not hesitate to make a scapegoat of the lowly executive officers.

These officers also manage to keep the lower staff from revolting or complaining by traditional methods used by the British in the pre-independence era--divide and rule. By favouring and rewarding a few, and threatening and punishing others with transfers to remote postings, they manage to keep the staff divided.

Given this state of affairs, it's quite amazing that the tiger hasn't become extinct. But then, such things will continue with neither the states/centre nor the judiciary keen to make amends. The ifs officers hide facts from the judiciary and the ngos as usual, wanting fame and publicity, but will do nothing for the lowly executive staff.

A range forest officer puts the state of affairs quite aptly "I would give the tiger another decade, if not less to be totally extinct."