Debates explode over more focus on species beneficial to humans 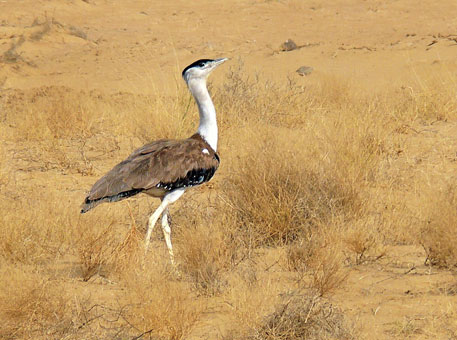 Are we going to protect only those species that give humans obvious benefits? The question will hang heavily over the Conference of Parties (CoP) to the Convention on Biological Diversity (CBD) in Hyderabad. The International Union for Conservation of Nature (IUCN) and the Zoological Society of London (ZSL) brought out a list of the world’s 100 most threatened species in the first week of September during the IUCN World Conservation Congress in South Korea. The list points out that species conservation programmes focus on those having direct benefits to humans.

According to IUCN, the identified 100 species in over 48 countries will disappear in the next two decades. The reason is clear: they do not provide any obvious or direct benefits to humans and are thus slipping out of conservation attention. There are four Indian species in the list: Great Indian Bustard, Gooty tarantula, a blue-coloured poisonous spider, Batagur baska turtle (northern river terrapin, found in the rivers of West Bengal and Odisha) and White Bellied Heron. Ornithologist Asad Rahmani says, “The four species lack the charisma of bigger endangered animals like tigers. But their disappearance is of concern as all the four once occurred in great abundance in India.”

The IUCN report sets a pressing agenda for CBD—arresting loss of biodiversity and preventing extinction of species. In 2002, CBD set 2010 as the deadline for “significantly” bringing down loss of biodiversity and extinction of species. The world missed this deadline with all factors, like loss of habitats and overexploitation, remaining the same or increasing in intensity (see ‘Biodiversity 2050’).

Our ecological footprint has long exceeded Earth’s capacity to sustain. This is leading to faster biodiversity loss. In 2006, the human ecological footprint exceeded the biological capacity by 40 per cent. In 2002, it was just 20 per cent extra. In 2010, during CoP-10 in Japan, all countries admitted that they had been unable to meet the targets. Most countries reported that several species decline in their own territories.

So, the new deadline of 2020 came into existence to reduce habitat loss by 50 per cent or less in prevention of species extinction. This is one of the 20 new targets, known as the Aichi Targets, agreed upon by parties to CBD.

In contrast to IUCN report’s articulation, CBD’s argument is that biodiversity and ecosystem conservation are not getting the right attention because countries are not aware of their real values. Going by the second Aichi Target, lack of valuation of biodiversity and its integration to national policies have been the reasons for biodiversity loss. This target mandates that by 2020, biodiversity values should be reflected in national and local policies including national accounting and reporting systems.

CoP-11 is the first conference after the new targets came into existence. The IUCN report is just an explosive prologue to it. Jonathan Baillie, director of conservation in ZSL, set the pitch for the upcoming debate in CBD while releasing the list at a press conference. “We have an important moral and ethical decision to make: do these species have the right to survive or do we have the right to drive them to extinction?”

In the ICUN Conservation Congress, the 8,000-odd participating scientists and conservationists agreed that the donors and conservation movements tilted support in favour of species whose services to humans have been quantified. “Whilst monetising nature remains a worthwhile necessity for conservationists, the wider value of species on the brink of extinction should not be disregarded,” says the IUCN-ZSL report.