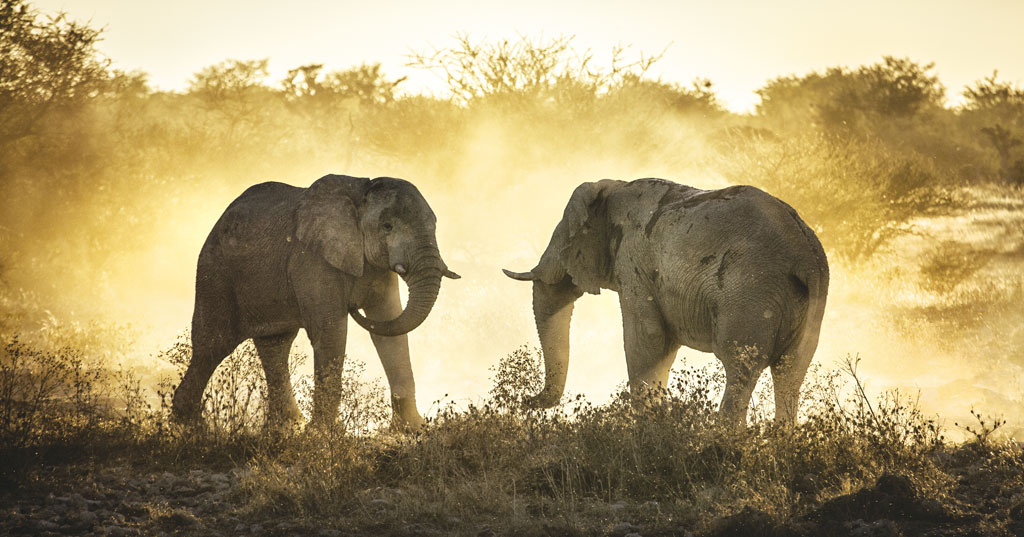 Many techniques have been employed by people and governments to keep wild elephants out of human settlements, or at least to reduce their visitation rates. Fire-crackers and bonfires, electric fences, cultivation of tobacco and red chilies and deep trenches have been tried so far. For the first time, an ‘elephant-proof’ wall has been constructed to mitigate conflict with the large herbivores. We were in Chorgalia, a picturesque region in the Himalayan foothills, 20 km from Haldwani, Uttarakhand, to learn about the wall constructed by residents of the hamlet in late 2013. The village residents grapple with problems of crop-raiding by elephants and other wildlife, as Chorgalia is located on the edge of thick sal forests, now included in the Nandhaur Wildlife Sanctuary.

The one-kilometre wall, built with stone and cement, is over 2.4 m tall and about 0.5 m thick, running along the eastern edge of Chorgalia abutting the forest. A jagged steel strip with a razor-sharp toothed edge was embedded along the top portion along the length of the wall. A narrow staircase was provided every 500 m along the wall to enable human movement. The wall looked robust and cost `40 lakh. Since the funds had run out mid-way, the wall could not be completed and encloses only a part of the village. Forest department officials believe the wall is the most effective mitigation method used so far in Uttarakhand.

So what’s in a wall, one would ask? And has it attained its objective? We conducted a survey among local village residents. We tried to explore the extent to which the wall had reduced crop-raiding by elephants, but ended up finding out more about the perceptions of local people regarding this mitigation structure and other impacts the elephant wall had on people’s lives.

Chorgalia comprises four revenue villages with a diverse community, both caste and class wise. About 66 per cent village residents own land, while the remaining 34 per cent are landless and completely dependent on wage labour or odd jobs for their sustenance. Landless people also tend to be heavily dependent on fuelwood, while the more prosperous use other household energy sources such as biogas and LPG, in addition to wood. As is typical of the terai landscape, agricultural lands are fertile and the water table is high, enabling people to grow two crops a year—maize and rice in summer and wheat as the rabi crop.

Discussions with village residents revealed a history of opposition to the elephant wall. The construction of the wall began on the wrong foot. Initially, it was being built very close to the walls of houses located along the edge of the village. This led to protests as the village paths were being obliterated. The wall was then shifted further towards the forest, about 10-15 m away. The construction took villagers by surprise, and most stated that they were not informed during the planning process.

Our survey revealed 45 per cent respondents felt elephants were entering the village as frequently as they used to. They attributed this to the fact that the wall ran only along one edge of the forest nullifying any impact on elephant movement. However, a similar proportion of respondents (39 per cent) stated elephant visits had reduced after the construction of the wall. To analyse this anomalous responses, we found that people who had a positive opinion of the wall’s usefulness were those who had large land-holdings (67 per cent) or lived in their homesteads located within the fields (72 per cent). These people were also not dependent on fuelwood (62 per cent). The survey showed how perceptions are guided by people’s immediate needs (see ‘A wall has two sides’). 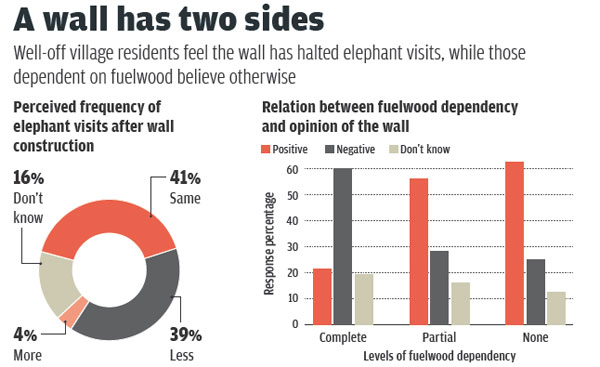 Most of the negative responses came from households who were landless (70 per cent), fuelwood-dependent (59 per cent) and those living adjacent to the wall (59 per cent). The grievance of village residents towards the wall were many, but increased difficulty in procuring fuelwood and fodder were the most common ones. Women usually collect wood and fodder, and they feared the wall would make escaping difficult if chased by an animal.

Some people felt that it had become impossible to take their cattle for grazing in the forest as animals could not navigate through the narrow passages. The wall had also turned a barrier for poor people without access to toilets in their homes.

Interestingly, the villagers came up with their own improvisations, and placed bamboo ladders on either side of the wall, just outside their houses especially if they were not situated close to the gaps.

But what if the wall were never constructed at all? Were other alternatives possible? The forest department has a scheme which entitles people suffering crop damage to monetary compensation, for which funds are always at hand. However, most respondents said the scheme was a non-starter. One resident had not received any compensation even a year after applying, while another said the amount awarded was paltry to make up for the crop damages caused by the pachyderms.

But can elephants and people realistically be separated? There is a certain degree of tolerance for elephants among agricultural communities which may make mitigation measures such as this redundant. As one village resident told us, “The elephant is an embodiment of Lord Ganesha. He will come and go as He pleases.” Moreover, elephants cannot be easily blocked by artificial structures unless they are well designed.

The case of the “elephant wall” in Chorgalia highlights the dire need for involving local people in design and implementation of expensive mitigation measures. Inputs from biologists and social scientists may help in better planning as well as monitoring of the impact of such structures. The elephant wall has alienated large sections of the local community, particularly the poorer, forest-dependent people, and ironically in a place where a new wildlife sanctuary has just been established.

Ghazala works with the Centre for Ecology, Development and Research, Delhi, and Arushi holds a Master’s in environment and development from Ambedkar University, Delhi