R K Laxman and his love for common crow

Legendary cartoonist who passed away on Monday in Pune had a fascination for the crow, which he thought was a really ‘uncommon’ bird

R K Laxman and his love for common crow 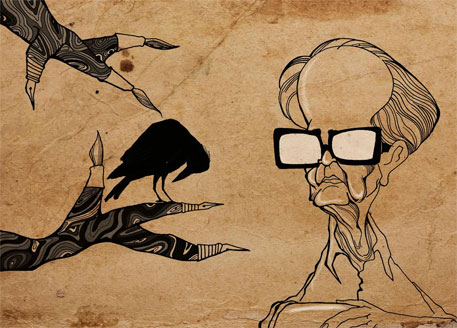 The creator of the “Common Man”, well-known Times of India (TOI) cartoonist R K Laxman passed away on Monday evening in a Pune hospital at age 94.

For more than 60 years, Laxman, younger brother of late novelist R K Narayan, has chronicled daily life in India in his well-known cartoon column, “You said it”, in TOI.

Among other things, the legend had an uncommon interest in a common bird: the crow.

He learnt his art drawing them. In his autobiography, “The Tunnel of Time”, Laxman notes: “I drew objects that caught my eye outside the window of my room—the dry twigs, leaves and lizard-like creatures crawling about, the servant chopping firewood and, of course, the number of crows in various postures on the rooftops of the buildings opposite.”

In 2011, when he turned 90, Laxman admitted in an interview to the TOI that the one thing he was missing the most was crows.

“He likes crows for their colour and also because the bird is very intelligent. He loves crows more than me,” his wife Kamala told the newspaper.

What attracted Laxman to crows has also intrigued scientists for a long time: intelligence.

Crows are often called “feathered primates” by scientists since in terms of intelligence, they are equal to humanity’s closest cousins, the great apes.

Like apes, corvids (which include crows) can pass a “mirror” test. If a mirror is placed in front of an individual, it would most likely be able to recognise the reflection as its own. Apart from humans, only apes display such behavior.

And like apes, studies show, crows can make and use tools. A 2010 study found that crows found in the South Pacific whittled away branches into hooks and tore leaves into barbed probes to extract food from hard-to-reach nooks.

Crows are also known to have very good memory. For instance, studies have shown that crows can remember the faces of people who are hostile to them and can be hostile to such people in turn.

Crows can also remember their feeding sites or the places where they have hidden food long ago.

Crows also are known for their high level of social organisation—they plan their behavior according to what other members of their group do.

Some scientists even see a parallel evolution between crows and humans over millennia.

In their book, “In the Company of Crows and Ravens”, authors John M Marzluff and Tony Angell note that for a large proportion of human history, crows have been a ubiquitous and prominent part of our world:

“Our early interactions with crows (particularly ravens) seem to have resulted in a generally respectful—even awed—attitude towards them…However, when humans became largely agrarian, crows became our competitors—stealing food and raiding crops—and had to be scared off with “scarecrows.”

Later still, crows came to be associated with disease and death as they scavenged the corpses of the victims of the plague or of war, and for that reason, they are a convenient symbol of evil and of death in horror literature and films, to this day. In modern times, some species of crows have followed us into our cities, and their populations have boomed because they have exploited plentiful food resources, such as refuse. Once again, their adaptability brings them into conflict with humans, who have to devise ingenious methods to keep the crows out of their waste, the authors say.

No wonder, Laxman so much admired crows which he once described as a really “uncommon” bird.