Will milk fortification benefit the poor?

Will milk fortification benefit the poor? 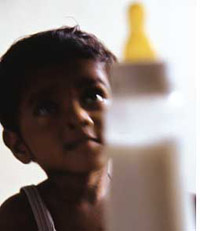 Industry has come up with yet another method of tackling malnutrition in India. On March 12, Global Alliance for Improved Nutrition (gain), an industry association, invited members of Parliament, government officials and experts from dairy industry to discuss malnutrition. High on the agenda was fortification of milk with vitamin A. gain claims it is a cost-effective way of improving nutrition, but public health experts say the poor do not drink enough milk to benefit from it.

Among those present at the meeting was Congress mp Sachin Pilot, a staunch advocate of milk fortification. "Milk fortification is not complicated. It will make a huge difference to those who consume fortified milk. It is not a solution for everything but it is one of the cost-effective strategies for ending malnutrition," he said at the meeting. The cost of fortification is one or two paise per litre. Pilot is also part of the Citizens' Alliance Against Malnutrition, a coalition led by young mps. He recently submitted a one-page private members' bill in the Lok Sabha stating that the Department of Women and Child Development had recommended milk fortification decades ago and he only wanted the recommendation to be made mandatory. This will require a change in the Prevention of Food Adulteration Act, 1954.

Since fortification will increase the cost of milk, building public opinion is important to amending the act.

Though milk has natural vitamin A, it is removed during processing. Normally, 100 millilitre of milk contains 160-175 IU (international units) of vitamin A. Its content in toned milk is reduced to 60 IU, and in double-toned milk to 36 IU. Pilot is suggesting fortification at the concentration of 200 IU per 100 millilitre of milk. R Sankar, the south Asia representative of gain, says milk fortification will help the poor get 25 per cent of the daily recommended amount of 1,300 IU. Milk in tetra packs that target the rich is fortified. "It is only the poor who do not get fortified milk," he says.

Veena Shatrugna, scientist with the National Institute of Nutrition, Hyderabad, does not fully agree. "Milk intake of poor people is less than 100 millilitre per day. This means that they will get around 200 IU from fortified milk. Mandatory fortification is not going to help those who need it and create undesirable levels in those who do not need it." Sankar counters that taking as much as 5,000 IU is not toxic.

Nobody denies that vitamin A is necessary and its deficiency prevalent. The National Nutrition Monitoring Bureau estimates that about 80 per cent of women and 86 per cent of children in the age group of 1-5 years in India consume less than 50 per cent of the recommended dietary amount of vitamin A. This deficiency can cause blindness and skin ailments. To avoid this the government used to provide vitamin doses to children twice a year under the Reproductive and Child Health programme. As the vitamin is fat soluble, it helped them through the year. In the recent years, the programme has deteriorated for some unknown reasons.

"It would be better to go back to the original programme where children were provided massive doses of vitamin A," says R Senthil, convenor of the Indian Medical Parliamentarian's Forum. Milk, he adds, is not a good choice for fortification as the poorest of the poor do not have access to it. Pilot could not be contacted despite repeated attempts. Arun Gupta, national coordinator, Breastfeeding Promotion Network of India, sees the call for fortification as an effort to create vitamin market for industry. So does C Sathyamala, a public health expert. "It appears that the government finds it too expensive to feed the poor but cheap to subsidize the micronutrient industry," she says. Sankar, however, maintains, "Private players are important to reach the product to the poor. But when we try to do something, there is noise."

Milk fortification is not an untried idea. In the early 1980s, the Department of Women and Child Development had recommended milk fortification but very few dairies did so. Mother Dairy that continued to fortify milk at its own cost, does so only for the milk it sells through vending machines.