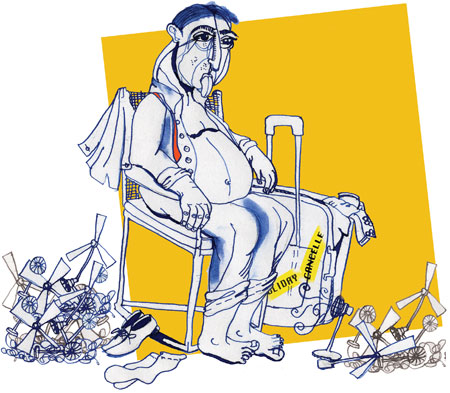 Wind energy has been the poster child of India’s renewable energy programme. Data released by the government shows the staggering pace at which wind farms have been added across the country. But most of them deliver only a fraction of their generation potential, according to the Union Ministry of New and Renewable Energy (MNRE). This is due to use of obsolete equipment. The electricity regulators now want to discipline this errant child—no tax holidays, and payment subject to performance. But this is likely to happen if the industry agrees to the new direct tax code, which withdraws sops to the industry.

Data maintained by MNRE shows that between 1990 and 2011 about 13,000 MW wind power capacity was installed in India, propelling it to fifth rank among the wind power producing countries. Wind energy forms a little less than 10 per cent of the total installed capacity of the country, but contributes less than three per cent to the country’s power generation, Central Electricity Regulatory Commission (CERC) data shows. “At best, Indian wind farms have managed a capacity utilisation of 30 per cent,” says an MNRE official. According to MNRE data, average capacity utilisation in 2009-10 was a low 18 per cent (see graph).

In 2008, the prime minister announced the national action plan on climate change which mandates that minimum five per cent energy be procured from renewables by March 2010; this was to increase one per cent every subsequent year. Sensing these targets could not be met in existing conditions, a new policy was announced in Decem ber 2009 to improve the sector’s performance. MNRE introduced a generation based incentive (GBI) scheme. Under it, Rs 0.50 is paid for every unit of electricity fed from a windmill to the grid over and above the feed-in-tariff a utility pays.

The GBI scheme was in addition to the government’s promotional scheme, Accelerated Depreciation (AD), launched in the 1990s. It allowed companies investing in wind farms write off about 80 per cent of invested capital in the first year (see ‘How tax sop works’). This led to setting up of a large number of wind farms (see ‘Fanning an alternative’, Down To Earth, August 15, 2008). “A lot of these farms are in a shambles after the tax benefit was availed. In some cases, the promoters have neglected them completely,” says a financier.

The AD scheme did not penalise power producers for inefficiency. Consequently, some of the most favourable sites in the country are under-utilised. On the other hand, the few investors who opted for GBI recently increased generation considerably. “Since GBI, there has been steady increase in the height of wind turbine towers and the size of the turbines, which has increased generation substantially,” says S K Dey, manager of the government-run Indian Renewable Energy Development Agency (IREDA). 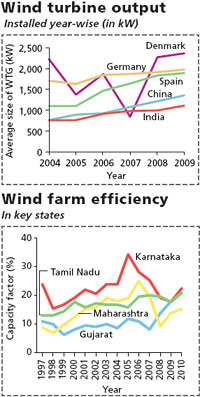 But even with incentives, improvement has been sluggish—of the 13,000 MW installed capacity, only 400 MW have been installed under GBI scheme. “No one wants to incur the cost on technology upgradation,” says G Subramanian of the Indian Wind Energy Association. Over 90 per cent of the power plants are installed at the country’s most windy sites under the AD scheme, but the technology is outdated. “In the goldmines of wind, we have outdated technology installed for tax benefits,” says an MNRE official.

Technological upgradation of re-powering of these sites may be the only solution. India Wind Energy Outlook, a report published by Pune’s World Institute of Sustainable Energy (WISE) in April 2011, states that capacity utilisation of small turbines used in Tamil Nadu is estimated to be less than 15 per cent. According to an IREDA report, wind turbines in the 1990s seldom exceeded 500 kW output (see graph). Manufacturers of these turbines have disappeared from the market, which has affected operations. Modern turbines can be twice more efficient.

A successful re-powering exercise was carried out by Gamesa wind turbine manufacturing company in Coimbatore, Tamil Nadu where 350 kW and 500 kW turbines were replaced with 850 kW turbines, which is expected to increase capacity utilisation to 25 per cent from the current 13-17 per cent. Another study by WISE in July 2010 notes that if wind turbines installed before 2002 are replaced with new ones, Tamil Nadu’s wind energy generation would jump 50 per cent over the 4,890 MW output last year.

The study notes lack of economic incentives as the primary barrier to re-powering. “End of AD will lead to not just better generation, but bring in new technology and better forecasting skills,” says Rakesh Shah of CERC.

Wind forecasting is another aspect energy producers rarely heed because they were never penalised for supplying erratic power. The technology ensures beforehand knowledge of the amount of energy a power plant will produce. CERC’s amended India Electricity Grid Code, wherein wind producers had to forecast with 70 per cent accuracy the energy they will feed into the grid, was to be implemented from January 2011 but had to be postponed by a year because of the industry’s opposition. Absence of forecasting technology leads to grid instability and shut-down. In India, power producers pay an Unscheduled Interchange charge if the generation promised to the grid is different from actual generation; renewable energy producers pay no penalty.

The government’s recognition of the impending problem has come in the form of direct tax code (DTC) that suggests withdrawal of sector-wise sops, and will be enforced from April 2012. The plan is to enforce DTC, which would mean withdrawing AD scheme, by the end of the 11th Five-Year Plan. But the proposal can become a reality only if industry endorses it.

“ DTC’s implementation has already been postponed from April 2011 to April 2012 and the tax holiday for the special economic zones (SEZs) will continue till April 2014 because of pressure by developers and units in SEZs. DTC is likely to be opposed by various interest groups, including those in wind energy,” says an MNRE official. Even MNRE’s suggestion to withdraw the AD scheme in April 2012 may not materialise. “There is opposition to end this route. But it can hamper capacity building in the wind sector,” the official adds.
Special Report Special Report Wind Energy Wind Energy Turbines Tamil Nadu Subsidies Renewable Energy Renewable Energy Ministry of New and … India Energy Policy Energy Policy Energy Climate Change
SUPPORT US