The 11th plan has set what industry considers a modest target of 10,000 mw capacity addition in five years. Everyone agrees that much more is possible. But for this to happen, big time, the business of wind must be into energy generation and not just encashing credits because of investment subsidies.

It can be argued the plant load factor data is wrong, that India actually utilises installed capacity much better. This is possible; individual wind farms do that. 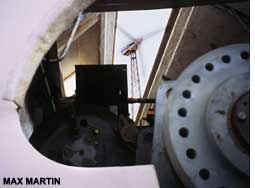 But without data, collected regularly and validated, it is impossible to agree. It is also difficult to estimate what should be the optimal plant load factor (plf), in different states, different wind regimes. In Europe, it varies from 25 per cent to 30 per cent. In Spain, for instance, load factor is 30 per cent.In India, most regulators peg it around 20 per cent. Therefore, the current plf for India, as a whole--at 15 per cent, and for some states as low as 10 per cent--is unacceptable.

The current sop-soaked package pushes industry towards investment, but not generation. The way ahead is to move industry to invest in capital and pay for its generation of power, through the compulsory renewable portfolio standard (rps) and carbon credits from the Clean Development Mechanism (cdm).


The cost of wind power is the cost of the capital investment in the wind turbine and its infrastructure. After that the 'farm' just runs. But it is that cost of infrastructure which breaks the economics of wind. Industry analysts say cost of capital is increasing--they now peg it at Rs 6 crore/mw, as compared to Rs 4-5 crore/mw earlier. This is paradoxical; the market dictates that when the scale of operations increases cost per unit should decrease.

Everything depends on cost of capital. If cheap, investors do not have to pay high interest rates; they stand to gain, faster with fiscal incentives and sale of energy. If the company is cash rich and also has profits it wants to make good, then the 80 per cent accelerated depreciation comes very handy. Assuming an investment of Rs 36 crore for a 6 mw wind plant (at Rs 6 crore/mw), the company can show a depreciation, in the very first year, of Rs 4.8 crore, virtually writing off its capital. Profits from sale of energy make it sweeter.

But if the company has to raise funds from the open market--even assuming it raises 50 per cent funds at a low 10 per cent interest rate, even assuming the depreciation benefit--it would end up paying through its nose, breaking even in 5-7 years, depending on the interest burden.

No wonder, then, that wind energy is not the business of energy companies, but cash rich entities wanting tax cuts. Is this why hotel companies, spinning mills, temple trusts, even film stars, are into wind energy? No power generators?


In the current bouquet, two incentives are key tax benefits in the form of accelerated depreciation and payment for the units of wind energy generated at premium rates. Currently, states have arbitrarily differing rates for wind power tariff, which (see table What's the logic?).Tamil Nadu, most wind-advanced, has the lowest tariff. Many say this is curtailing further growth; ironically, the state has the highest plf.

The big question would the 'right' tariff be to move towards a generation-based regime? mnre has recently taken a first step, announcing, after much huffing, a scheme for generation-based incentive for grid-connected wind power. The scheme is for those who cannot (and will not) avail the depreciation benefits, proposing Rs 0.50 per unit (kwh) over and above the tariff fixed by the state as an incentive. Most industry insiders welcome this step, but say it is too tentative to move the country into a generation-based regime. They argue Rs 0.50 per unit will not drive operators into this business. Nobody is willing to commit to the price of wind power that is generation-based, but say the range should be Rs 4-7 per unit, based on the cost of capital and plant load factor.

The question is how can we get there?

The wind power industry is rushing to get carbon credits from cdm but is tripping on its convoluted rules and processes. Most wind power installations have applied for cdm, or are in the process of doing so. Of the 966 cdm projects from India, about 20 per cent are wind power projects. They account for about 12 per cent of all the Certified Emission Reductions (cers) to be sold by all cdm projects from India, by 2012, to the developed world. Currently, only 54 projects are registered (see table we want CERs), adding up to roughly 15 per cent of the country's installed capacity. But if all projects in the pipeline get registered, it would add up to 4,150 mw, roughly half the installed capacity.

All wind cdm projects (registered, in the pipeline) 195

At the current cer unit price, in the European Climate Exchange, 21-23, cdm can play an important role in underwriting the cost of the energy generated.

With this price and assuming 20 per cent power generation, wind energy would get an additional benefit of Rs 1.20 per unit, which, if added to the price of Rs 3.50, would make the unit revenue a competitive Rs 4.70 (see table cdm maths). cdm earning could be 20-25 per cent of the total revenue generated.


cdm is tied up in its own convoluted rules of proving 'additionality', in turn putting wind projects on the spot, causing them to wriggle through this clause "A cdm project activity is additional if anthropogenic emissions of greenhouse gases by sources are reduced below those that would have occurred in the absence of the registered cdm project activity". In other words, the project could not have been possible without cdm. This means proponents have to apply before the project comes up, proving it will be impossible without cdm approval.

This must change. For renewable energy projects like wind power, the clause on financial additionality should be removed. Instead, cdm should be used to give incentive to the 'programme of wind' energy. This would require the government or an agency to submit a programmatic cdm and demand all projects of wind are cleared, with benefit. cers must be used to pay a premium for green power, adding not Rs 0.50, as the current generation-based incentive scheme does, but Rs 1, or more, to each unit. This will give wind the power it needs to blow better.

India has its own version of the German-renewable energy feed-in law, under which utilities have to purchase a certain proportion of their energy from green sources. The renewable portfolio standard (rps), which each state can individually determine, can be a powerful tool to promote green energy like wind, as producers can get premium rates and a market. But, currently, it is struggling to make a difference.

First, nobody is responsible for collating information on how rps is used in different states; how much green power is bought and at what price. Information, scattered with state electricity regulators, is impossible to trace. It is also not clear, as in Maharashtra, if the utilities are let off if they do not meet the compulsory green quota. It is necessary the Central Electricity Authority be tasked with this job, so that promotion and policy correction are possible.

Secondly, it is clear some states, with high wind and other renewable energy potential, have set low quotas, or their quota for green energy is also exhausted. For instance, Gujarat has set a meagre limit of 2 per cent, restricting its green energy growth. Then, in Karnataka and Tamil Nadu, that have high wind potential, even their high quota of 10 per cent has been exhausted, say industry experts. This leads to a paradox a high-potential state is not providing incentives for markets and investment. It is capping wind, literally.

In this scenario, says wind energy expert Rakesh Kacker, former head of the Indian Wind Energy Association, government must allow for inter-state transfer of rps; it would facilitate green energy growth. He cites the case of the Delhi Electricity Regulatory Commission, which has stipulated power utilities supplying the capital will have to source 1 per cent of green power. Given that Delhi does not have any 'green power' source as such, they would have to purchase paper certificates of green power from other states.

This will also push towards generation-based incentives, as companies will install plants to get the green power premium, or utilities will set up their own to meet the green quota. But for this, penality provisions must be used and must sting.

Wind power needs land. It could be private land. It is bound to be government land--revenue land or forest land (as, controversially by law, in the Dhule case). In all this, local communities--villagers who live in the vicinity of the wind farm, aware it produces electricity--get little other than the constant noise the plant produces, and the vibration, caused by the working of the turbine, that literally disturbs their life.

It is clear that wind, at best an intermittent generator, cannot easily become a fulcrum of distributive supply. It will remain a grid-connected energy system, for now. But this doesn't mean local communities cannot get benefits--say, rent or sharing from the lease of land--and power supply guarantees from government and the company.

If such benefits, tangible, do not flow, acquiring land to set up wind energy plants, let us call it land for wind (an elemental exchange which, in India, can only be wrested from people, unless they choose to give it away by accepting compensation) is bound to become ever more contentious. If not done democratically, the push for wind energy can well become just another alienating 'infrastructure' programme, which (like all such programmes hitherto, as villagers perceive) takes benefits from local communities and gives nothing back. It will be so understood, and so resisted, as just another brown--not green--energy programme.

There is a big potential for wind energy in this country. It is a fillip to energy security. The question now is if the government can bite the bullet so that wind is not just another big-buck business but one that welcomes a long-term energy solution.