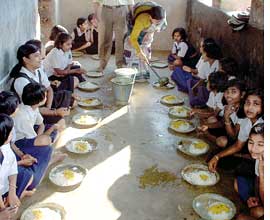 School teachers in many parts of the country find the government's mid-day meal scheme a bit of a burden. For good reason it takes away valuable teaching time. But teachers in more than 32,000 primary schools in Orissa do not have anything to complain about the mid-day meal scheme. The scheme in these government and government-aided schools is run by women's self help groups (shgs). An impressed Orissa government plans to entrust the running of the scheme in the entire state to these women's shgs.

Pratibha Devi, headmistress of Bhubaneswar's Mamtaj Ali Upper Primary school is also amongst the admirers of the women's shgs. The school's mid-day meal scheme is operated by a Bhubaneswar-based shg, Maa Tarini. "We did have a cook and helper when teachers ran the scheme in our school.But keeping watch over them took away a lot of teaching time. We also had to keep stock of the rice and dal," she says.


Matters have changed since 2007 when Maa Tarini took over the scheme in the school. "Now we have to do nothing more than hand this women's group the day's attendance sheet, so they know the number of students for whom they have to cook," the headmistress says.

Her colleague Bhramarbar Mangraj showers more encomiums on Maa Tarini. "The quality of cooking has vastly improved since the shg took over," he says. Rajendra Das, a student of the school agrees. "Earlier I would often skip the mid-day meal because the food wasn't tasty, sometimes it was half-cooked. But since women from Maa Tarini have begun cooking, things have changed. The dalma (lentils mixed with vegetables) is delicious," he says.


Saraswati Mantri, mother of seven-year old Sarabjit is another admirer of the women shgs. "Every morning, my son is raring to attend school. The mid-day meal has become a major attraction for Sarabjit, ever since the shg group, Narayani Swayam Sahayak Goshthi took over the scheme in his school."

Powerhouse Primary School, which Sarabjit attends, gets mostly children from slums in Bhubaneswar's Powerhouse and Kalyamandal areas. The school's headmaster Debendra Prasad Mohapatra says that school attendance has almost become 100 per cent, since Narayani Swayam Sahayak Goshthi took over the running of the mid-day meal scheme in 2007. "We now find time to motivate parents to send their children to schools," he says.


Running mid-day meals is the first venture for quite a few of the shgs. The 14-member Maa Tarini group is among them. It started with a Rs 1,200 loan from the Bhubaneswar-based Sharda Micro Finance Society. We have repaid two-thirds of it and also saved a bit, says Binodini Rout, the shg's secretary.

The government provides shg groups, Rs 2.14 per student and provides them with rice, dal and vegetables. shgs groups have to pay fuel charges.

The shgs make about Rs 2000 every month, but have no complaint about the small remuneration they get from the government. "We have learnt to manage small budgets in our homes. We sometimes make savings by making bulk purchases of fuelwood. But the savings are negligible Once we have established ourselves, we will certainly ask for more," says Pushpalata Dalei, secretary of Narayani Swayamsahayak Goshthi. 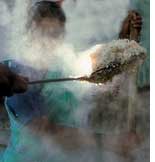 Some shgs are thinking of introducing toy banks and games to attract students to schools. Rout of Maa Tarini is keen on the idea. "We are mothers and know how to engage a child," she says. But she is unsure of how the government will take to the idea.

Pramila Mallik, Orissa's minister for women and child development is not averse to the idea. She would, however, like the shgs to concentrate on the job that has earned them accolades. "Cooking is their forte. So why not focus on it," she says. The minister added that there is a proposal to pay the women's groups Rs 700 per school as supervision charge.