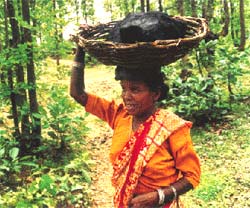 For Sumani Sahu, of Orissa's coal town Talcher, the days are becoming longer. Mining has eaten away at her village, leaving but a shell behind. Fetching water and gathering firewood keep her occupied from three in the morning to late in the evening. The remaining hours in the day are spent out of home as well. Blasting dynamites might cause her house to collapse. Her husband is employed as a casual labourer in the mines. He hardly comes to her anymore, as "she is unable to manage the house properly".

Far away from Sumani, the women of Karnataka's Kolar goldmine areas replay her story. After a 113-year history of gold mining, the mines have shut shop. The immediate impact was on the women. As men were laid off, women set out of their homes at four in the morning to travel 100-150 kms away to nearby cities and towns. They work as maids or factory labour, and return late in the night.

Sumani and the women of Kolar are just a few examples of what mining does to women. Particularly when rehabilitation and resettlement programmes for displaced people never consider women as victims. So on July 24 and 25, when 20 women from India's mining areas assembled in Visakhapatnam, the result was the National Network for Women and Mining (nnwm). An alliance of activists and groups working in mining areas and on the problems of women, the nnwm has decided to put the plight of women affected by mines on the national agenda. "The network is the first step towards it," assertsK Bhanumathi, convener of nnwm, who has been working on mining issues for a decade. The nnwm has its secretariat in Hyderabad but its constituents will work in their respective areas. "The nnwm is about sharing our concerns and working together to get heard, rather than a formal organisation taking up a single issue," she says.

Of the 50 million people displaced by various projects in India, approximately 10 million have been displaced by mining projects alone. And about 40 per cent of this population comprises women. Seventy five per cent of the displaced people have not yet received any form of compensation or rehabilitation. "Though mining has been on for more than a century, we never spoke about its impact on women. The first impact of mining is the collapse of the traditional family system, where women play a major role," says Bina Stanis, a member of the Hazaribagh-based Chotanagpur Adivasi Sewa Samiti. India's major mines are in tribal-dominated areas, and the traditional economy is based on forest and land. "Mining affects both these resources, thus affecting women the most," adds Stanis.

Legally, in a predominantly patriarchal system, women have no rights over lands or natural resources when they are displaced by mining projects. Displaced women have been forced out of their land-based work, and pushed into marginalised forms of labour -- as house-servants, construction labourers or into prostitution, all of which are highly unorganised, and often socially humiliating. It is always the men who receive cash compensation or a job offered as compensation. Women depend solely on the wages of the male members, as mining by the nature of its activity does not permit the participation of women.

The nnwm, now comprising around 20 groups working on women-related issues in India's mining states like Andhra Pradesh, Orissa, Jharkhand and Bihar, will embark on ascertaining the status of women in mining areas and the impact of mining on them.

Women's rights over natural resources and its inclusion in all rehabilitation and resettlement programmes is the first issue the network will take up. "But before that, we call for a moratorium on all mining activities, and demand a gender audit of India's mining companies," says Bhanumathi.

In the two-day long discussion of the network in Visakhapatnam, it was decided that the network, along with other international networks, will protest and lobby for its agenda in the coming World Summit on Sustainable Development (Rio+10) in Johannesburg. The preparatory conference to the Rio+10 in New Delhi will also see this network protesting against the government's gender-biased policy in mining areas.