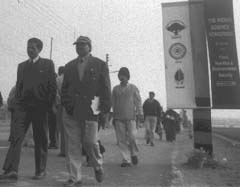 "In the virtual world, we virtually promise everything but deliver virtually nothing."

this caption from one of the cartoons exhibited at the Indian Science Congress 2001 sums up the outcome of the massive jamboree, held in Delhi from January 3 to 7. The prime minister promised food for all, the scientists "expressed concern" over almost everything, and biotech companies appeared in a borrowed green garb. The sponsors included us biotech giant Syngenta, which also produces pesticides, and Monsanto. The theme was 'food, nutrition and environmental security'. Yet very few environmentalists were present at the conference.

The real issues got left out. There were representatives from communities that had implemented projects on the field successfully. But they found no place worth mentioning. Familiar faces mouthed familiar platitudes. It was like a tedious curriculum -- only the class hadn't graduated, and fresh faces and names were in short supply. A bored delegate quipped, "Given the history of such events, we cannot expect any action or follow up." Boredom was writ large all over the faces of the delegates who kept waiting from one lunch to the other.

Down To Earth presents glimpses of a party without one moment that wasn't dull.


Anil Gupta, professor at the Indian Institute of Management, Ahemdabad made a presentation at the conference on blending traditional knowledge with new technology and to recognise and appreciate grassroots innovators. "A small farmer who develops a new kind of tractor by making modifications has to pay the same amount of money to get his tractor tested as the big and multinational companies like Ford or Eicher. Is this fair?" asks Gupta.

He says that if India has to become innovative, it must build on the resource in which the poor people are rich -- knowledge. "To recognise and encourage small and underprivileged innovators the National Innovators Foundation (nif) was formed in March 2000," says Gupta. Eminent scientist R A Mashelkar is one of the founding members. The goal of nif is to make a national register of inventions and innovations so that grassroots or small innovations do not go unnoticed.

"In every society there are oddballs who think differently and come up with small innovations that are useful at their level. This is also true for the poor rural masses. Some of them keep coming up with solutions when faced with a problem. Gupta gives numerous examples of grassroots innovations, whether it was a new pulley to draw water from well or a new kind of trolley. "We have also created honeybee network of similar innovations," he says. The three main barriers to learning are language, literacy and localism. The honeybee network overcomes these barriers by a multimedia, multilingual technology. "So if rural people cannot read, they can see the video of the innovation and listen in their own language," he adds.


The Indian Science Congress' virtual endorsement of biotechnology comes with some strings attached. Today, 10 multinational corporations control 32 per cent of the us $23 billion seed market and 100 per cent of the genetically modified seed market. Biotech giant Monsanto even has a share in India's own seed giant, Maharashtra Hybrid Company -- it owns 27 per cent share of the company.

With that share, Monsanto has started work in India on Bt (Bacillus thuringiensis) corn, which is genetically modified for pest resistance. Syngenta and Zeneca, are also planning to plant Bt corn on Indian soil. Though planting of this gm crop is not yet allowed in India, a representative of Syngenta told Down To Earth : "We are fighting for that permission and believe that it will soon come." Syngenta has become the largest seller of pesticides in India and is third largest seller of seeds. "Companies such as Syngenta, Monsanto and Aventis control all biotechnology research and trade secrets, all of their applications too," says Suman Sahai of the Delhi-based Gene Campaign.


For many, the Indian Science Congress will be known for a long time as the congress of protests. During the opening ceremony, a large number of farmers were not allowed inside the sabha sthal (the main venue of the congress), due to security reasons (the prime minister was to inaugurate the conference). Left in the cold of Delhi winter, they started raising anti-congress slogans. "It is an anti-farmer congress. We, the real farmers, are being kept outside the discussion," said Bindeshwar Prasad, a farmer from Purnia, Bihar. "How can they take decisions without the participation of farmers?"

It was not just the farmers who were unhappy. The Indian Anthropological Association (iaa) criticized the decision of the congress to scrap the independent section of Anthropology and Archeology and combine it with human biology and behavioural sciences. "Anthropology is not only a behavioural science because it studies biological, socioeconomic and cultural aspects as separate units of investigation and also in their inter-relationship," said J S Bhandari, president of iaa.

Unfortunately, even this congress failed to go beyond the beaten path of globalisation-bashing. It could not come up with tangible solutions to counter the onslaught of biotech giants on Indian agriculture. The congress claimed to celebrate the indigenous and self- reliant tradition of sustainable agricul-ture and to resist the imposition of ecologically hazardous and economi-cally non-viable genetic engineering technologies.

The People's Science Congress also accused the Indian Science Congress of becoming a marketing forum for launching untested, unsafe and capital intensive technology that was controlled by global biotech corporations.