What is overweight for Caucasians is now obese for Indians

Veena Katyal's evening snack consists of four peanuts and a cup of tea. This is one of the lifestyle changes she had to make when she found out five years ago her weight-related problems had increased. Shortness of breath, high blood pressure and loss of balance while walking were symptoms she was suffering. At a height of 1.59 metres and weighing 95 kgs, her body mass index or bmi ( ratio of weight to square of height in metres) was 39. According to who she was obese and not overweight or normal.

Obesity increases the risk of diabetes and heart diseases. Taking steps to prevent it is necessary. Katyal consulted Delhi-based nutritionist Ishi Khosla, who suggested she change her diet cutting down on rice and chapattis. Her meals comprised small amounts of vegetables, yoghurt, nuts and aloe-vera gel bought at health food stores.The effort helped her reduce to 68 kgs.

who cut-offs for bmi are 18-24.9 for normal, 25-29.9 for overweight, and 30 and above for obese adults. After shedding 27 kgs, Katyal's bmi came down to 28. who would have categorized her as overweight. Experts have now come up with bmi exclusively for Indians which still keeps her in the obese category.

who gets its data only from Caucasian populations. "Indians show symptoms of diabetes and heart disease at lower weights and should have separate guidelines to diagnose obesity," said Anoop Misra, director, department of diabetes, Fortis Hospital, Delhi.

Misra and a group of 100 doctors from India studied parameters like body fat and risk of diseases and announced new guidelines at a meeting held in New Delhi on November 15-16, 2008.

An Indian with a bmi of 25 and above is obese, say the guidelines published in the February 2009 issue of the Journal of Association of Physicians of India. Only a bmi of 18-22.9 makes the person normal and one with a bmi of 23-24.9 is overweight. 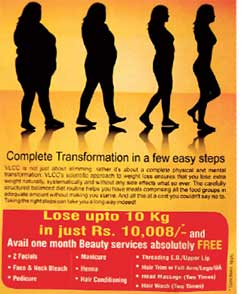 A tutor, Katyal led a near sedentary life. She was aware of the health problems associated with obesity and knew she'd have to put in more than her daily walks. who says daily 30 minutes of exercise is sufficient to prevent obesity-related diseases. As per the new norms, Indians have to put in 60 minutes everyday which is why Katyal rarely misses her gym schedule.

Specialists argue that these guidelines cannot be applicable to every part of India. As Stephan Rossner, professor of health behaviour research from Karolinska Institute, Stockholm put it "There are many ethnic, socio-economic and geographical differences. India also has large chunks of vegetarian as well as meat-eating populations. This makes it hard to generalize."

Rekha Sharma, one of the panel members and director of nutrition and dietetics at the Diabetes Foundation, Delhi, said, "The guidelines can be adapted to incorporate the country's varied cultural patterns." This is also reiterated by Khosla, who added that while a basic standard is much needed, treatment is better on an individual basis. "What is important is that these guidelines are the first of their kind. They set a standard that can be used for the treatment of Indians in any part of the world," added Misra.

The new bmi puts more Indians at risk who should take steps to control obesity, suggest doctors. With a bmi of 28, Katyal has a long way to go to shed the obese tag, but she does not suffer from shortness of breath anymore; her blood pressure is normal. Katyal is definitely healthier than before.