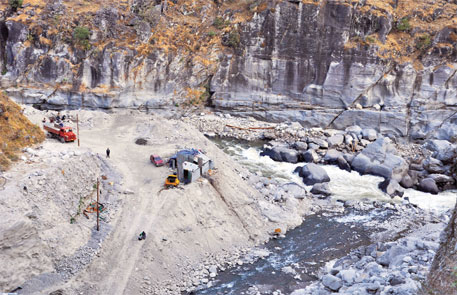 Floods in the Mahakali, on the Indo-Nepal border, swept away 148 houses and displaced more than 500 people of Nepal’s Darchula district in June last year. The deluge wreaked a similar havoc in Baitadi, Dadeldhura and Kanchanpur districts. Residents somehow pieced together their lives and protested before the authorities three months later. They said construction of embankments and dykes on the Indian side of the narrow river was the cause of their miseries. India carries out construction activity without informing Nepal, and the country rarely gets enough time to take ameliorative steps. The protesters demanded an immediate end to all such construction.

“Before monsoon last year, India did arbitrary and unilateral construction along the river obstructing its flow,” says Raghubir Singh Thagunna, secretary of the Flood Victim Struggle Committee, who led the agitation in Darchula. “This caused heavy erosion in Nepal and led to the disaster”. 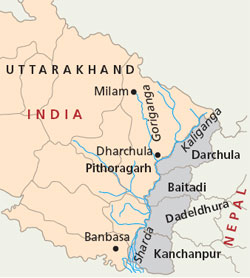 The Kaliganga, as it is called in India till Banbasa in Uttarakhand, where it acquires the name Sharda, is once again witnessing construction. “As if the June floods were not enough, India is now building dykes,” says Hansa Raj Bhatta of non-profit Darchula Civil Society.

The Joint Standing Technical Committee (JSTC), which comprises senior technical officials of both the countries, held its routine meeting in September last year. The committee is a bilateral mechanism to share information on assessment and warning of flood dangers. At the meeting, Indian officials did not inform Nepal about further construction along the Kaliganga in Dharchula subdivision in Pithoragarh district.

Upstream of the Mahakali bridge, which connects Dharchula in India with Darchula in Nepal, the Uttarakhand government is constructing studs to prevent soil erosion, says Pradeep Singh Dhami of Dharchula. It is also raising the ground level by dumping silt, which is a routine flood protection measure. Baluakot, Elagad, Jualjibi and Tawaghat villages in Dharchula are witnessing construction of studs and embankments. As a result, the river is changing its course and affecting Aairaan, Brahmadev, Chhapari and Dhaulakot villages in Darchula. Moreover, the 280-MW Dhauliganga hydroelectric power project in Uttarakhand is rebuilding portions that were washed away in the floods.

“Unilateral action by India to build structures on its side is causing a serious problem in the Nepalese territory, leaving Nepal to accept fait accompli,” says Dwarika Nath Dhungel, former secretary in Nepal’s water resources ministry.

“We expect one side to notify the other whenever some structures are being proposed and built in the bordering areas. India has totally forgotten this. Whenever Nepal raises the issue, the Indian embassy issues a press release and denies Nepal’s claims,” he says.

Komal Prasad Regmi, joint secretary in Nepal’s ministry of irrigation, evades a direct response, but says, “We do not have official information from India about any construction along the Kaliganga.” N K Mathur, Commisioner (Ganga), ministry of water resources, India, denies any construction activity. “Prima facie, it appears to be Nepal’s routine propaganda,” he says.

“Several flood victims have still not got new homes. Yet, India is carrying out construction without thinking about millions of people who live this side, while our bureaucrats are scared to speak up against a country which is a superior power,” says Bhatta.