Air pollution eats into your life. This chart tells you how much

Forty-three of the most pollution-affected districts in India are in the Indo-Gangetic Plain; Leh is the least-affected of the 687 districts analysed in the study by the University of Chicago

An analysis of district-wise data of University of Chicago (EPIC)’s Air Quality Life Index (AQLI) has shown that residents of the National Capital Territory (NCT) of Delhi are losing over 10 years of their lives due to air pollution. 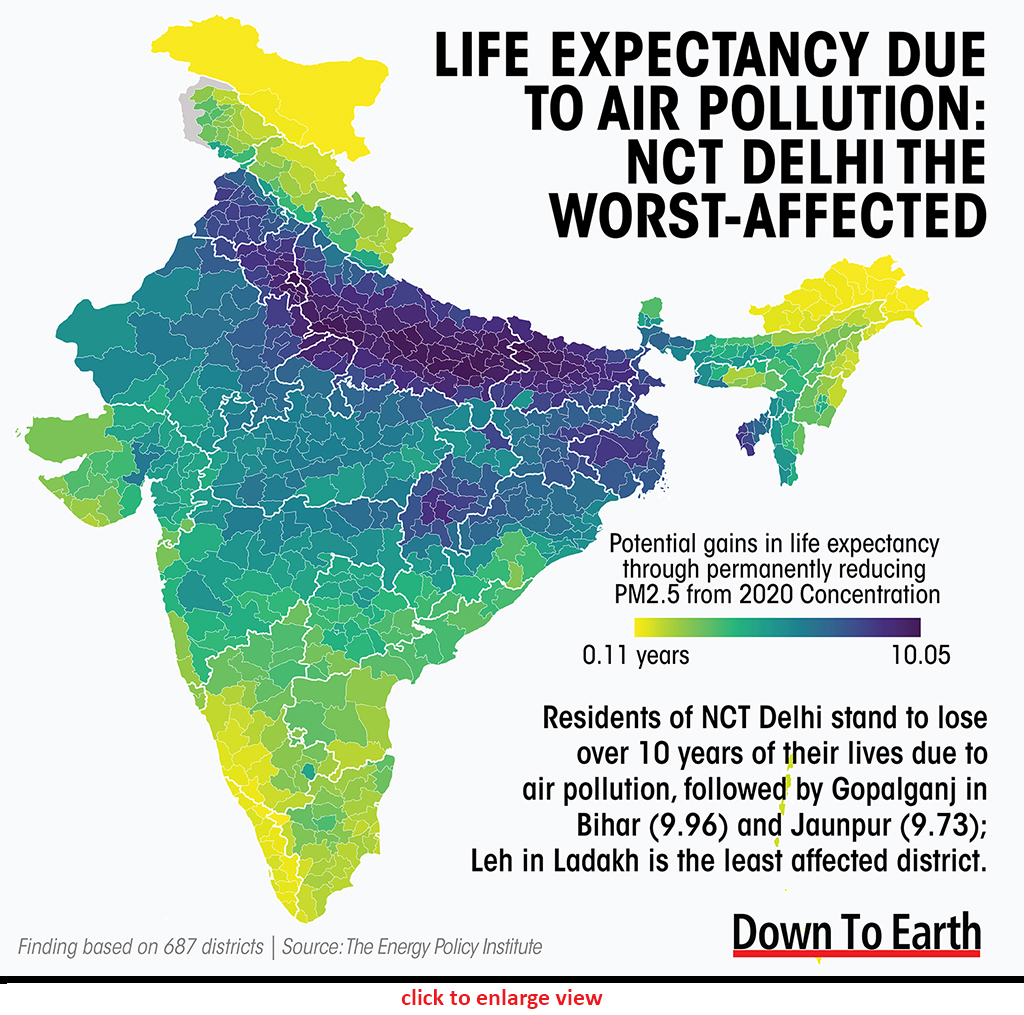 The report aggregated data from 11 Delhi districts. It was followed by Gopalganj in Bihar, where residents are losing over 9.5 years of their lives due to air pollution. Gopalganj was followed by Jaunpur (Uttar Pradesh), Siwan (Bihar) and Agra (Uttar Pardesh).

The 43 most-affected districts in India are from the Indo-Gangetic Plain which comprises Punjab, Haryana, Delhi, Uttar Pradesh, Bihar and West Bengal.

The report noted that 40 per cent of the 510 million people residing in the Indo-Gangetic Plain are on track to lose 7.6 years of life expectancy on an average.

The first district which is outside the region is Bhind in Madhya Pradesh, followed by Dhaulpur in Rajasthan. Here, the population is losing a little over 8.5 years of their lives due to air pollution.

The Himalayan region, the north eastern states and southern India are doing much better than the Indo-Gangetic Plain. Populations in Leh in Ladakh, followed by districts in North East India — Dibang Valley, Upper Siang, Anjaw and Lower Dibang Valley — are losing next-to-nothing life years due to air pollution.

The Nilgiris in Tamil Nadu and Wayanad in Kerala also are part of the list of 10-least affected districts in India.

Delhi and Uttar Pradesh, both in the Indo-Gangetic Plain, are also the worst and second-worst states in India affected by air pollution, according to EPIC.

EPIC noted that these figures were “relative to what (the life expectancy) would be if the World Health Organization (WHO) guideline regarding fine particulate pollution (PM2.5) of 5 microgram per cubic metre (µg / m3) was met.”

The report noted that while air pollution had increased over time — 61.4 per cent compared to the 1998 average — efforts were on to tackle it. In 2019, the Indian government came up with the National Clean Air Programme (NCAP) to bring down particulate pollution by 20-30 per cent by 2024, in comparison to the 2017 air pollution levels.

“A permanent, nationwide reduction of 25 per cent, the midpoint of NCAP’s target range, would increase India’s average national life expectancy by 1.4 years and by 2.6 years for residents of the National Capital Territory of Delhi,” the report noted.