In a different light

Here’s what Stanford University research papers, focusing on areas ranging from supermassive black holes to the intricacies of the human brain, look like when illuminated by light! 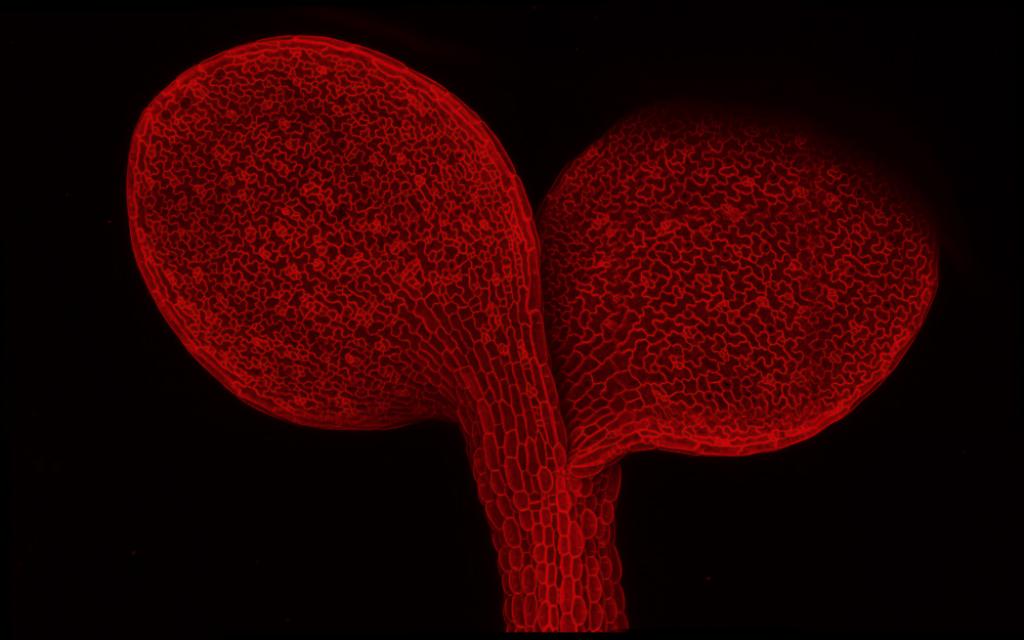 A view through a microscope of a small flowering plant – specifically, a young, wild-type Arabidopsis thaliana seedling – with fluorescent protein marking the plasma membrane, as seen through a microscope. The Bergmann lab at Stanford studied how one hormone pathway in plants regulates the way leaves build their epidermal layer with the right number of breathing pores. Image credit: Anne Vatén 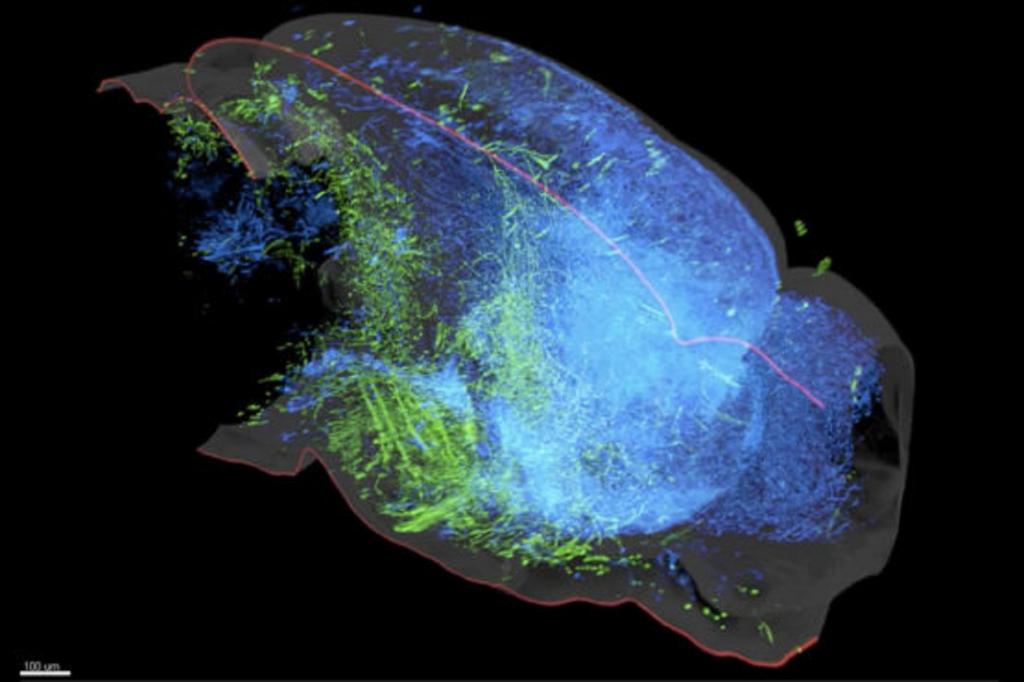 Stanford study reveals that the brain’s serotonin system—which regulates everything from our moods to our movements—is made up of multiple parallel pathways that affect the brain in different, and sometimes opposing, ways. A 3D rendering of the serotonin system in the left hemisphere of a mouse brain reveals two groups of serotonin neurons that project to either cortical regions (blue) or subcortical regions (green) while rarely crossing into the other’s domain. Image credit: Jing Ren 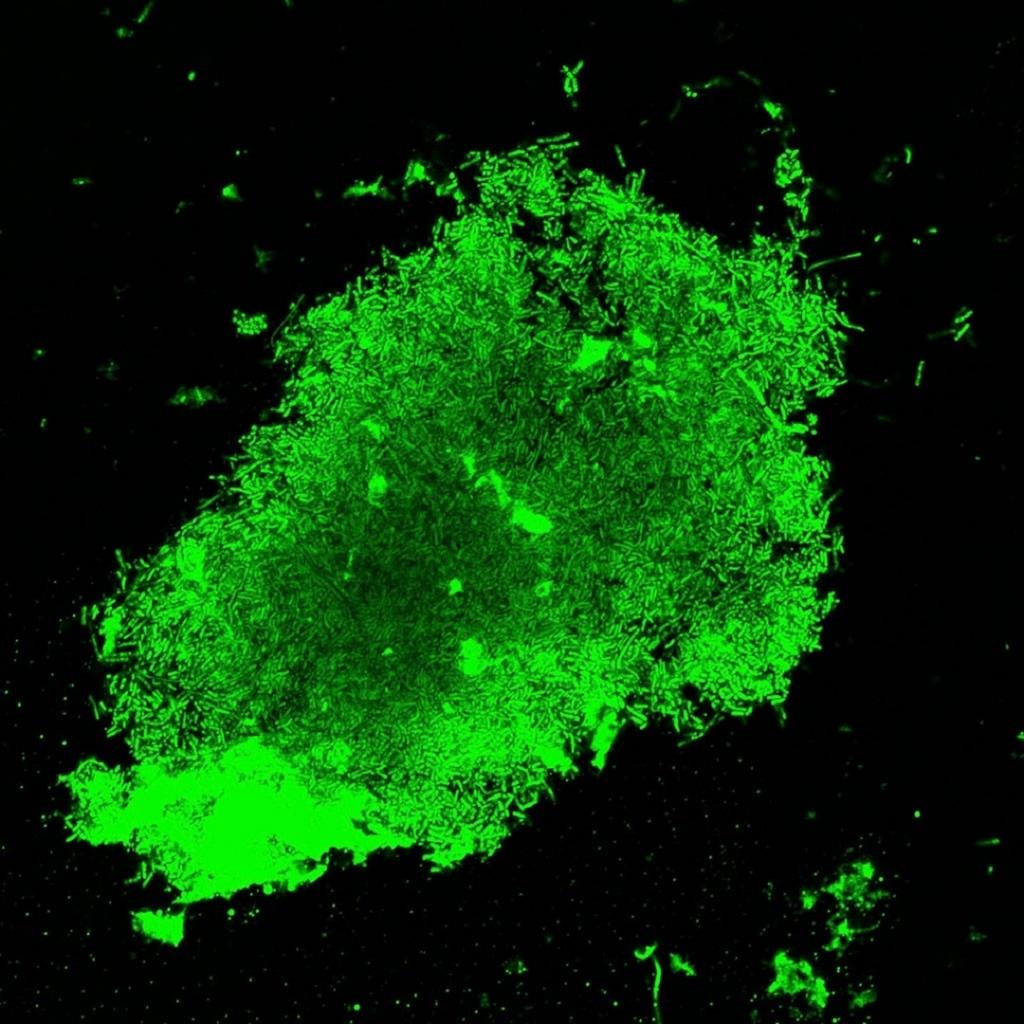 Guided by glowing bacteria, researchers have devised an imaging technique that can diagnose live tuberculosis in an hour and help monitor the efficacy of treatments. When the fluorescent probe was applied to a sputum sample of a tuberculosis-positive patient, the bright green shows where there is live TB. Image credit: Jianghong Rao 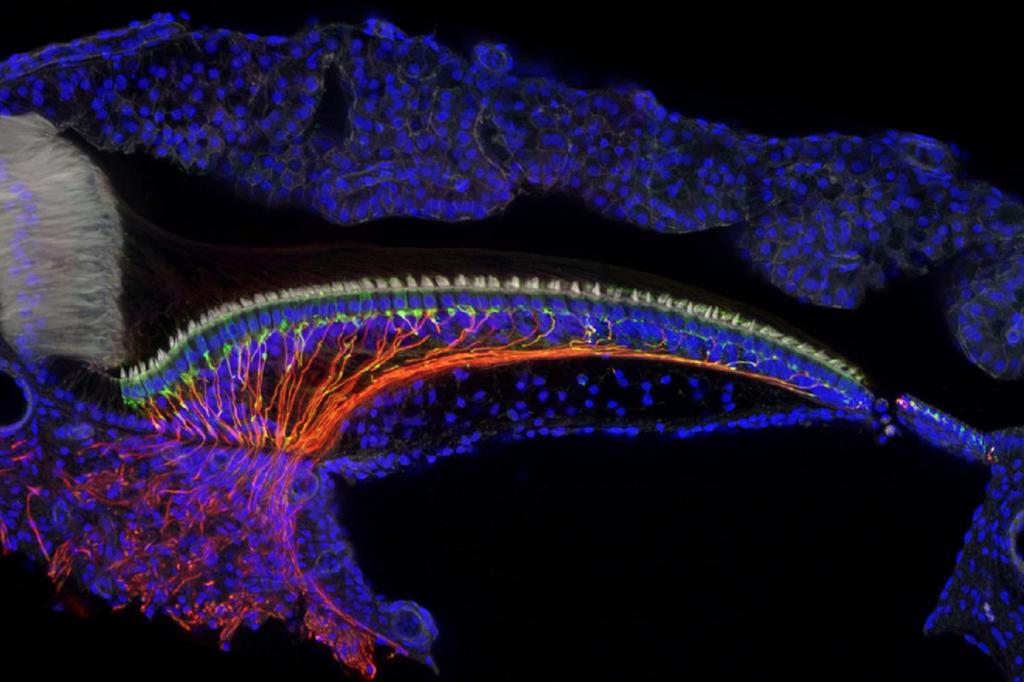 Amanda Janesick, a postdoctoral scholar studying the biology of hearing, points to a series of microscopic images on the screen—the cross sections of a chicken’s inner ear show hearing cells dying off and new ones replacing them. A transverse section through the middle of an embryonic (day 20) chicken cochlea shows neuronal connections to hair cells. The neuronal connections are colored green and red. Hair cell bundles are white. The image was taken at 40X magnification. Image credit: Courtesy of Amanda Janesick and Stanford Otolaryngology Imaging Core Facility 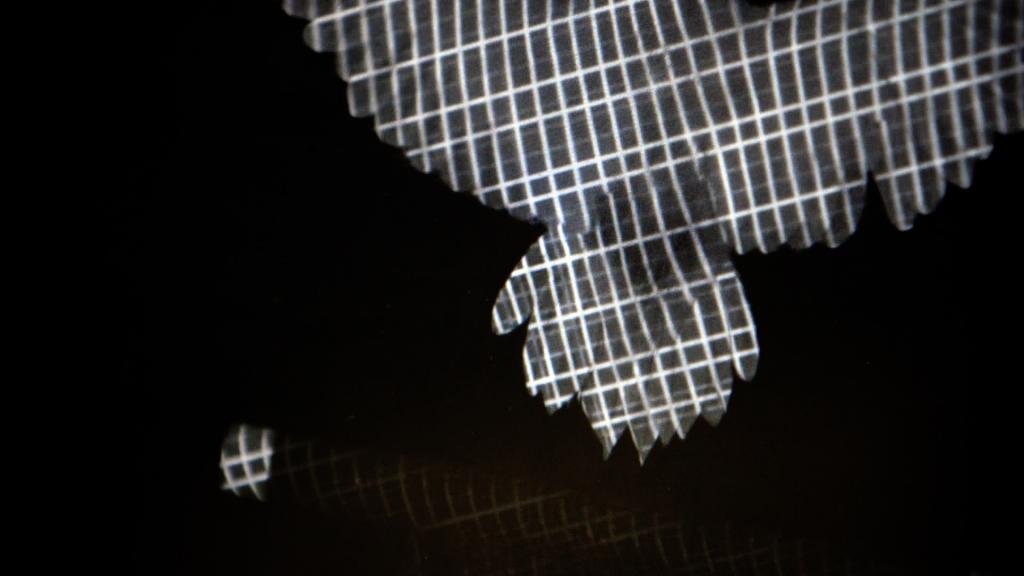 Researchers in the Lentink lab developed a new way to record wing shape during bird flight in 3D. This is a clip from a video of a parrotlet in flight. When the bird flies through this specially patterned light, its body acts like a projector screen. An algorithm then matches the deformed pattern on the bird to the original projected pattern to produce a detailed 3D reconstruction of how the bird moved through the light field. Image credit: Marc Deetjen 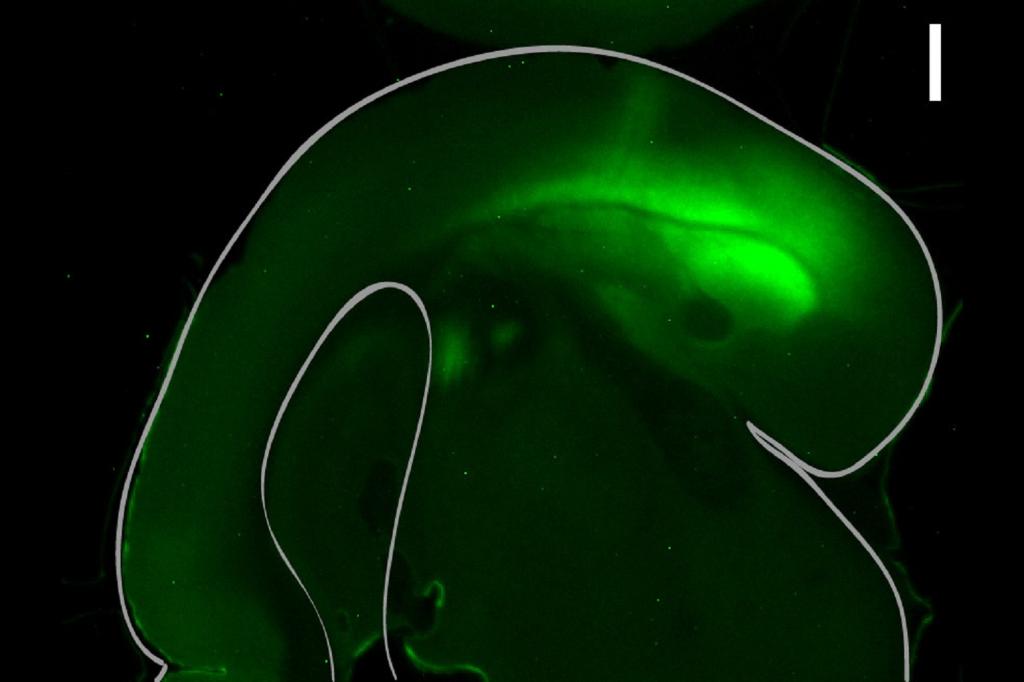 Stanford University researchers have observed how large groups of neurons in the brain both learn and unlearn a new association. Neurons from the amygdala in this mouse brain slice have been stained so that researchers could measure the activity of the neurons using a miniature microscope – developed previously by the Schnitzer lab. Image credit: Benjamin Grewe 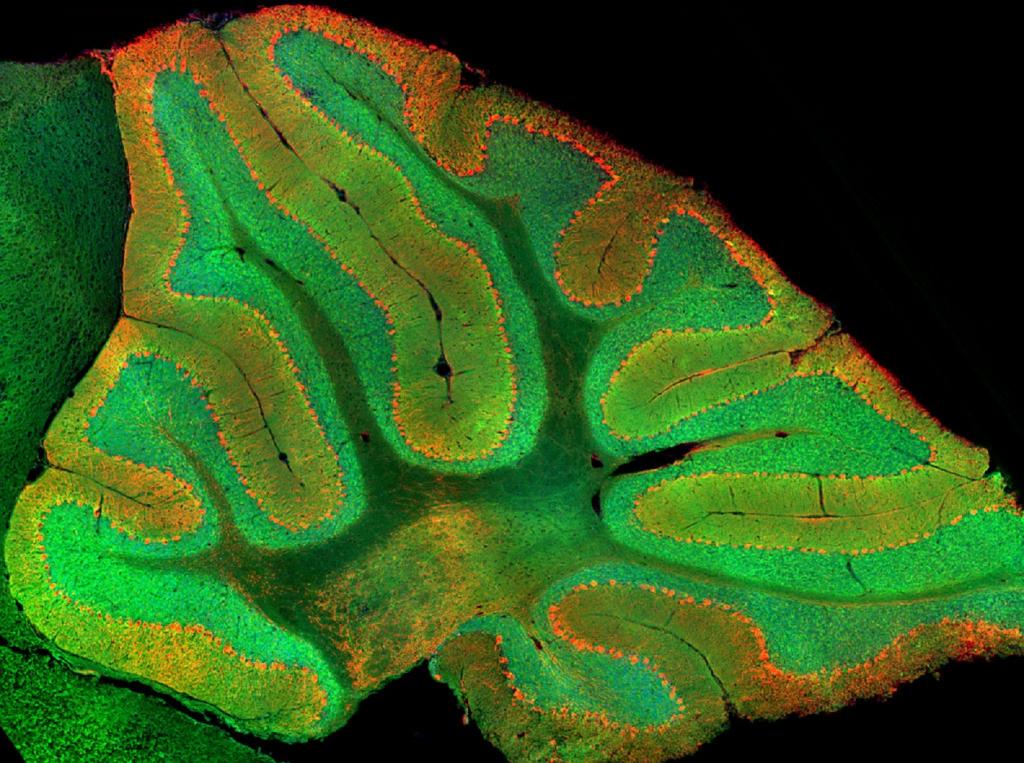 Researchers long believed that the cerebellum did little more than process our senses and control our muscles. Stanford researchers have found a previously unknown, cognitive role for the cerebellum’s granule cells, which show up as green in this image. Image credit: Mark Wagner 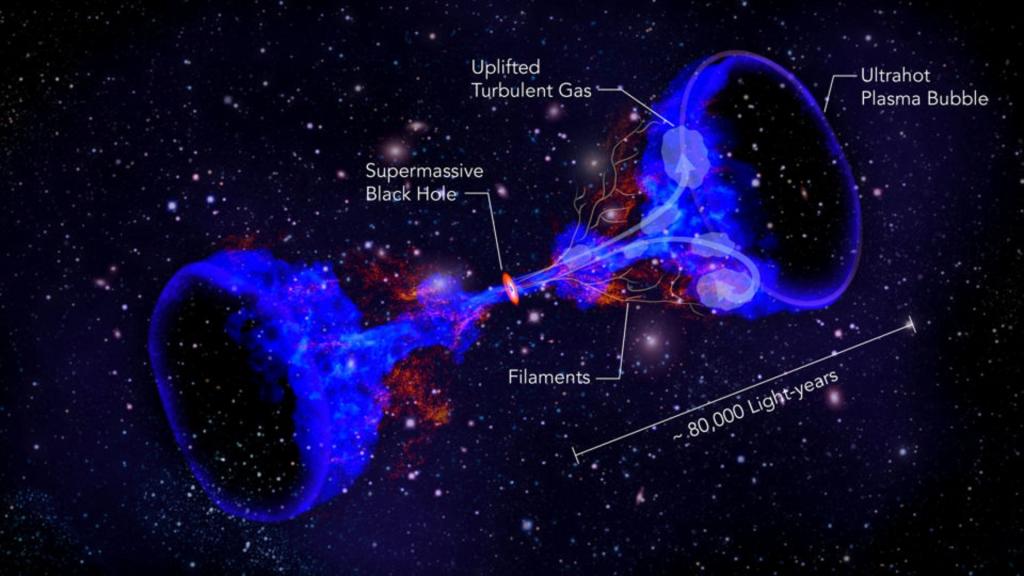 Working with information sent from the Japanese Hitomi satellite, an international team of researchers that include Stanford scientists has obtained the first views of a supermassive black hole stirring hot gas at the heart of a galaxy cluster. This image created by physicists at Stanford’s SLAC National Accelerator Laboratory illustrates how supermassive black holes at the center of galaxy clusters could heat intergalactic gas, preventing it from cooling and forming stars. Image credit: SLAC National Accelerator Laboratory 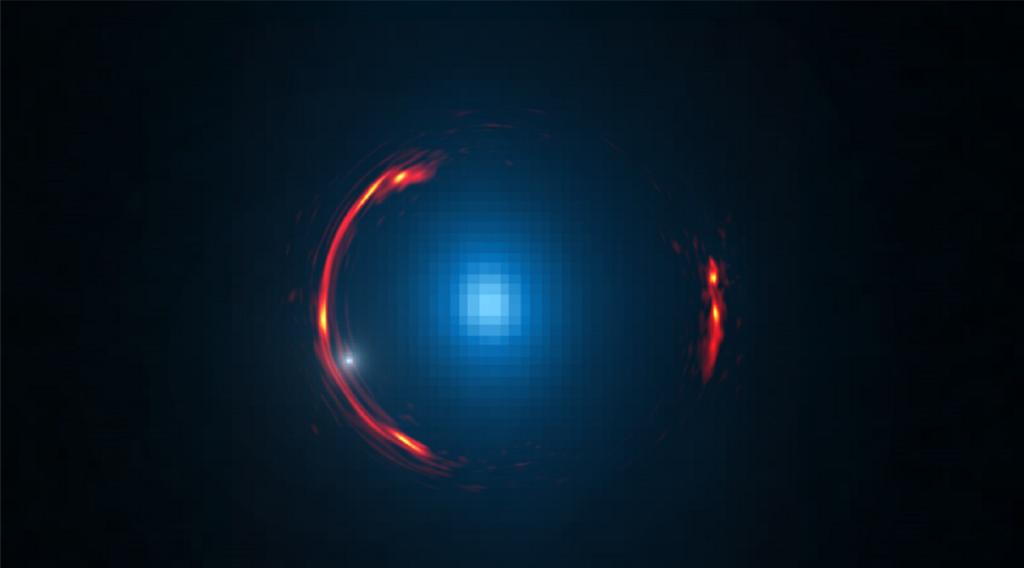 New analysis of an image taken by the Atacama Large Millimeter/submillimeter Array (ALMA), led by a Stanford astrophysicist, reveals evidence that a dwarf dark galaxy–a tiny halo companion of a much larger galaxy–is lurking nearly 4 billion light-years away. Composite image of the gravitational lens SDP.81 shows the more distant galaxy (red arcs) and the nearby lensing galaxy (blue centre object). By analyzing the distortions in the ring, astronomers have determined that a dark dwarf galaxy (indicated by white dot near left lower arc segment) is lurking nearly 4 billion light-years away. Image credit: Y. Hezaveh/ALMA