'Food security, not profit from trade in food, is priority for developing countries'

A report on “Food riots and food rights” was recently presented in the UK House of Commons. Funded by the UK Department for International Department, the report analyses the impact of food-related riots and public movements on government response to food insecurity. Naomi Hossain and Celestine Nyamu-Musembi, investigators and authors of the report, discuss key aspects of this virulent form of protest. They also assess the role of governments in ensuring people’s access to affordable food, in interviews to Jemima Rohekar. Some excerpts 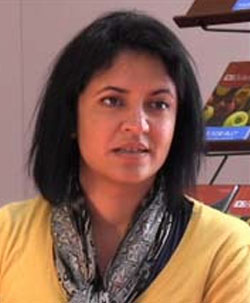 Naomi Hossain is a research fellow at the UK-based Institute of Development Studies and a political sociologist with nearly 20 years of development research and advisory experience.

Why is this report important?

We took our title “Them Belly Full (But We Hungry)” from a 1974 Bob Marley song that summarises a very contemporary, universal reality: people cannot tolerate gross inequality, particularly when it comes to their basic rights to be nourished, and in particular when rich and powerful people are profiting from their hunger. They cannot, and they will not. Even when there are great risks of doing so, they will find ways of mobilising to resist this.

Our report tells some of the stories of what happened during the food crisis of 2008 and 2010-11. World food prices spiked, sometimes doubling or more in a matter of weeks. People were shocked, angry and fearful. Protests were reported in as many as 30 countries around the world, and governments reacted in haste, sometimes stopping food exports (as India did for rice in 2008), and sometimes making the situation worse.

To date, we have mainly relied on media reports to understand who protested, why and how and with what impacts. Our report gets behind the news headlines and finds out what really went on – what people were thinking, how they coped, why some groups were able to get together to protest, and how governments and officials responded.

It gives us much deeper insights into the politics of food crises. It tells us that people find ways of protesting when they are fearful about price rises and expect their governments to act to protect them – and with democracy, people do expect this from their governments. Given that food price volatility is “the new normal”, we can expect to see more of these kinds of spikes, and also more of these kinds of protests.

Food riots were reported from many countries. Why choose India, Bangladesh, Kenya and Mozambique?

Even while these food riots were going on, social movements were struggling, sometimes successfully, to establish the right to food in their countries, using international human rights law. India is, of course, well known, and in Kenya, the 2010 constitution also clearly established the right to food. But in Bangladesh and Mozambique there were no movements for the right to food under international law, and a series of food riots, often violent, were reported. So we wanted to compare countries that had common historical, including colonial, experiences with food crises but which looked like having had very different types of struggles for food rights – some through the law, and some through riot or protest.

Which other countries reported movements that influenced government policy?

Government and global food policies changed in most countries, at least part as a result of the food crisis and the protests. There are not many countries in which this did not occur. Protests and movements are known to have had some influence on government policies in countries in Latin America, West Africa, North Africa and West Asia. It is now accepted that the so-called “Arab Spring” was triggered by food price rises.

What is it about rioting for access to food that makes the world sit up and take notice?

The media loves riots because they are visual, visceral and scary – always worth a headline. Governments hate riots because they signal their total loss of authority and failure to meet their most basic functions. Global markets and international institutions see riots as a signal of acute market failure – an indicator that something has to change.

How are the findings of this report expected to shape the future direction of development aid from donor countries?

Aid donors need to recognise that countries will always need to have control over their food systems – food sovereignty – and cannot rely totally on international markets as the neoliberal thrust of global policy has been pushing for so successfully. They will also need to recognise that acute food insecurity is a major source of governmental fragility – people cannot trust governments that fail to protect them from crises in their most basic needs, and governments that persistently fail to tackle food crises will lose legitimacy.

Providing food security is the foundation of the social contract between government and citizens. Markets cannot be relied on to deliver this at all times; governments need stocks, emergency price stabilisation mechanisms, food assistance schemes already in place, early warning systems, and a better general ability to hear what citizens are saying. They cannot protect the right to profit from trade in food over the right to eat.

Global food prices fell to a four-year low in September. Is the era of spiralling food prices over?

No! There are peaks and troughs. They are down for now, but in real terms, are still at a historical high. Lower than recent prices may discourage farmers from growing – although small farmers never benefited much from high prices anyway, so supply may go down in the coming seasons. Climate change-related events, commodity price volatility, financial market volatility, conflict and epidemics like Ebola are all likely to continue to influence food prices. As the world economy gets ever more integrated, the possibility of one such event triggering price spikes elsewhere in the system gets ever higher.

Celestine Nyamu-Musembi teaches at the University of Nairobi School of Law. She is a Kenyan lawyer with a background in legal anthropology.

List three reasons why countries in Africa have not managed to sufficiently address the problem of hunger/under-nourishment.

In Kenya, grain policy has supported big producers with high prices. So, while staple foods are available, it is often not affordable. Secondly, though food supplies in the market are good, mothers are working double shifts, even when they are breastfeeding, to bring in the money needed to keep the household going. At the same time, overworked people find it easier and cheaper to buy poor quality pre-cooked food than cook for themselves at home.

And the third reason is that while famine triggers an often tardy, but in the end effective, response, chronic hunger doesn’t have the same political power and tends to be ignored. The ordinary citizen has come to expect that her voice will not be heard on the subject of hunger, and she suspects that government failure to support her ability to access food (through keeping her land, finding a decent job and having caps on market prices) is related to corruption. When her complaints fail to make more than a momentary difference, she sighs and finds other ways to secure her family.

How do you see the role of legislation in securing access to food?  Must that be the first step towards food security?

The 2010 Kenya constitution made access to adequate food of acceptable quality a right for all Kenyans. Many Kenyans are cynical, because they don’t see it being realised. The country still needs legislation that sets norms and rules and specifies how to monitor, sanction and, where necessary, provide for shortfall. More importantly, it needs a justice system that has overcome corruption, so that public interest groups can stand up for the right to food of acceptable quality and price.

The Ebola crisis has threatened food security in the affected West African countries. Even as efforts are on to contain the crisis, what challenges lie ahead in ensuring access to food? What are the solutions?

Post-crisis rebuilding should take into account that poor people have suffered the most in this crisis. Promoting the ability of small-scale farmers to produce and transport food on a large scale, and creating effective means of levelling prices for urban consumers will be key to rebooting economies and, also, rebuilding trust in government and politics.

How will this report influence the future direction of development aid from donor countries?

While aid for famine relief and social protection programmes are successful, they are also dependent on external resources. Donors should consider helping governments and civil society to see that citizens are protected from extreme inequalities in accessing the basic necessities of life – food, shelter, security and environmental sustainability.

Global food prices fell to a four-year low in September. Is the era of spiralling food prices over?

No, all the conditions for price volatility remain in place. Global and local food prices are affected by instabilities in climate, energy prices, financial markets, trade deals and geo-politics. In Kenya, there has been no significant change in the degree of preparation for the next food price spike.