For more than two decades, Huta Ram Baidya has led the Save Bagmati River campaign. An affable, octogenarian activist and Nepal’s first agricultural engineer, his views have been widely circulated in the country’s regional language press, radio, television and on websites. He tells Aditya Batra that the river’s extreme degradation bears testament to extreme cultural and environmental loss in the Kathmandu valley 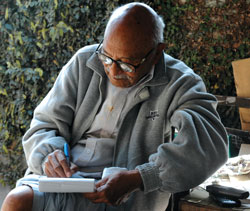 One of your more quoted statements is that the Bagmati is dirty because there is too much money flowing in it.

Bagmati is nature. She needs to be honoured and feared like nature. Feared like a teacher. She does not like money. Hindus believe when they die, they will be reclaimed by the five elements or panchatatva—jal (water), prithvi (land), vayu (wind), agni (fire) and aakash (space or void). I’m almost 90 and very sensitive to the need to protect nature. It will then care for us. If you start handling nature in a bad way, it will not honour you. If we concentrate our science on these five elements, we may be able to revive the Bagmati. Maybe it will take a long time. The easiest way to revive the Bagmati now is by not thinking big projects.

One morning a few years ago, I was working in my garden when I heard a helicopter flying overhead. I later learned it was a team from India flying along the riverbed; they did not have the time to walk along the river. I thought, how would they know how polluted the river is if they had not smelt it.

The government has plenty of money but there is no dedication. I do not know why the scientists, and the political and social leaders of this country are keeping quiet. Are they under some kind of political pressure? With wrong approaches towards the Bagmati river system, we have almost reached a point of no return.

In India, too, we have thrown a lot of money into the Yamuna and the Ganga, hoping it will clean the rivers.

In the case of the Bagmati, one hears of the “Bagmati Action Plan”. Probably triggered by funds given by India to save the Hindus (laughs). I have my own concept on how we can do this. Start with the simplest projects, which we could execute with our own resources and manpower. Our hill people developed irrigation dams with local materials, damning the river and diverting it; the technology is applicable here also. Involve local people as much as possible, not paid labourers. Start many small projects. Reduce imported materials.

The government’s plan to clean the Bagmati calls for making “green belts” along the embankments; this is going to destroy our heritage. Water will only flow faster and flood vast areas in times of heavy rain. These are simple things that people should know. Some engineers from India came to me, and they had never seen how we build our ghats (river banks). You see in Varanasi, the Ganga carries a huge amount of water, which is different from the Bagmati—it has seasonal flows. When I offered them my services, they told me, “We don’t need your advice. Come with money.” And what did they do when they had money? They planted trees along the bunds, encroaching the river bed to make nurseries.

Our engineers probably know how to order, but they do not know how to work with the people, which is practical work. An action plan should be one in which people work. Unless this mentality is encouraged, the Bagmati and its culture cannot be saved. When Buddha first came here, mythologists say, the Kathmandu valley was a lake so fertile it had thousands of lotus blossoms. If the Bagmati is gone, our civilisation will collapse. Can there be a country with a collapsed civilisation?

The Bagmati Action Plan calls for huge investments in treatment plants and waste management. How will this be done without spending large sums of money?

If somebody gives us money, why don’t we take it and do some work? Money becomes the main attraction. Instead, let us use local resources.

For example, let us build ghats with stones, not with cement. Use local timber. Instead of using the services of foreign engineers, let us involve local masons who have the experience and background of generations. That does not mean we ignore engineers; they should supervise and ensure things are made according to designs.

About five years ago, I went to the project director of Guheswari wastewater treatment plant (the only one that is functioning today). I asked him, why don’t you build a series of bunds with local stone, timber and labour, with a hard clay core and lighter clay surrounding it. This will allow water to seep through only after it has been filtered, increasing sedimentation that will raise the river bed and increase percolation in the wet season.

I also asked him to correlate sedimentation with a given amount of rainfall. Now, this does not require extensive equipment.

What about municipal toilet waste?

These are manmade problems; you need to get people involved in nature management (panchatatva management) initially on a small scale. You have to put restrictions, remove people living on the river’s banks. And let them not make buildings like this (he said, pointing around him). No restriction on land and buildings here. There are about 27 DEWATS (decentralised wastewater treatment systems) plants that the Action Plan document proposes, even more than large sewage treatment plants. But you have to initially start on a small, experimental scale.

What the Bagmati gets is the city’s sewage. My wife died about 20 years ago. After her cremation I had to bathe in the Bagmati. There was no place to immerse her remains in the river, it was all dirty. We had to wait and wait to see if there was sometime or somewhere it would be clean. This pollution interferes with our culture. There are people here who wanted to stop the use of plastic bags in the bazaar next to the river. We need an army of volunteers, groups of young people who will do this.

You are referring to the volunteer group, Friends of the Bagmati?

The Bagmati does not need any more friends now. It already has too many. What it needs is many meets (closest of friends). Friends come and go. The Bagmati needs friends who are like family members, where each one knows what the other is up to at all times. Every year volunteers do a clean up. But if your teeth are hurting, is it enough to scratch your cheek? The spirit of volunteerism is dead. The first thing they will ask is, “Why should I be a karamchari if I am not paid?” Once the spirit on which our economy was based was: land and labour make capital, or wealth. Now the order has changed. They now say, “Give us money first.”