Nitika Pant Pai, assistant professor at the department of medicine, McGill University, Canada, and her team have analysed data on acceptability of home tests for HIV/AIDS. In an email conversation, Pai tells Vibha Varshney how home HIV tests can help people infected with the virus. The study was published in PloS Medicine on April 2, 2013 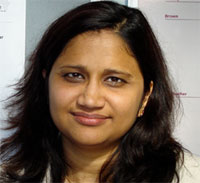 What aspect of HIV does your study deal with? What are the findings?

Six out of 10 individuals with HIV do not get themselves tested. The primary reasons for this are stigma, discrimination, lack of privacy and long waiting times. Self-testing circumvents these problems. Several self-testing initiatives exist across the globe, but data on acceptability, feasibility and accessibility to care are limited. For our study, we reviewed evidence on supervised (self-testing and counselling aided by a healthcare professional) and unsupervised (performed by a self-tester who had access to phone or internet counselling) self-testing strategies. We found that both strategies worked. Their was enough data on acceptability, feasibility and test preference, but data on access to care was limited.

How does the home test work?

HIV home tests are performed using oral fluid-based self-test kits approved by the US Food and Drug Administration (FDA). All that the user has to do is to swab along the gum line once using a flat test pad provided in the kit. This pad is then dipped in the vial containing test reagents. , which also comes along with the test kit. Once this is done, it does not take more than 20 minutes for the result to become visible. A single line means the person is HIV-negative and two lines mean the person is HIV-positive.

Users in the US can call a helpline number provided in the kit to help interpret the result. If positive, counsellors arrange visits to a clinic for further tests and treatment.

How reliable is the test?

We have evaluated the accuracy of the test across global settings and found it highly accurate—around 98.5 per cent sensitive and 99 per cent specific.

FDA-approved one-test kit called Oraquick In Home HIV Test cost $40 in 2012. But it is imperative that the price is kept reasonable. It could be $10-$20 in developed settings. And for developing countries, $7-$10 should be a good target price. There are several other kits being used. Calypte was successfully evaluated in Kenya. FDA is in the process of approving another one soon.

Can home testing lead to panic?

We did not find any evidence of suicide or self harm in people who used the home test. These problems are associated with HIV diagnosis and it is difficult to attribute them specifically to self-tests. If self-tests are offered with counselling and linkages to care, then people will call the helpline and seek care. Anti-retroviral regimens are easily available across the globe. Governments could operationalise both supervised and unsupervised testing strategies within the constraints of their healthcare systems.