ANTHONY MCMICHAEL heads the International Centre for Epidemiology and Population Health at the Australian National University, and is a member of the Intergovernmental Panel on Climate Change. He talks to VIBHA VARSHNEY and MARIO D'SOUZA about the health risks from global environmental changes 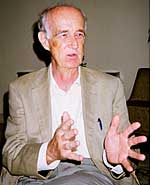 What are the impacts of climate change on disease outbreaks?

In the past two decades, we have recorded several changes in disease outbreaks across the world. When taken together, it seems they tell us a story about the impacts of climate change.

One can see that malaria [endemic to warmer regions] is now affecting people living in eastern African highlands. Schistosomiasis, a disease spread by water snails, too, has moved to China's northern region. The snails were not found in the region previously.There are also reports that oyster poisoning, which occurred occasionally along the northern Alaskan coast, is becoming common to the region. Since temperature of the Alaskan water now goes up to 15oC in summers, it provides a suitable temperature to sustain infection in oyster beds. Studies have also found a link between the recent cholera outbreaks in Bangladesh and the fluctuations in the El Nino cycle that warms the country's coastal waters.

Do rising temperatures and heat waves lead to stress?

The issue has been studied mostly in developed countries. What we know is that with rising temperatures, the number of deaths also goes up. Most of these deaths, that are attributed to immediate rise in daily temperature, are caused by heart attacks or respiratory failures. Very few studies have been done in this connection in developing countries.

Who are more vulnerable?

Elderly people, people suffering from various ailments and poor people living in low-quality houses are at a higher risk from heat waves. The Chicago heat wave of 1995 killed several hundreds of people; most of them were poor, living in small, unventilated apartments.

Some death cases were also reported because of social unrests triggered by extreme heat. Behavioural disorders were noticed as people locked themselves in their apartments which got overheated.

What are the other health problems?

Interesting links between climate change and obesity have been observed among the Inuit people. With rising temperatures, permafrost and sea ice in the Arctic region are melting at an unprecedented rate. As a result, a number of species from the region have migrated. It is becoming increasingly difficult for the Inuit people to depend on their traditional food sources. Instead, they are depending on processed and refined food. This also shows how the climate change is disrupting our food chain.

What are the specific risks for India?

In India, the frequency and severity of heat waves are acute in big cities. The night temperatures in cities are often 5oC higher than surrounding countryside during summers. This affects people living in poor-quality housing societies and slums. Climate change will reduce food crop yields and dry up water resources. There are predictions that in eastern Maharashtra, two-three million people are likely to be displaced by the end of this century due to droughts. Occurrences of diseases like diarrhoea, cholera, chikungunya and dengue will also multiply.

What strategies do we need to adapt to climate change?

The changes are occurring faster than predicted 10 years ago. There is pressure on us to introduce preventive strategies to reduce the risks, even though we don't have a complete understanding of the risks. It is a rather uncomfortable situation where we are being pushed to take preventive actions, before conducting all the research.

No doubt, climate change is going to have a huge impact on food yields, mainly in South Asia. If one takes the increasing population into consideration, the situation is going to be even worse the soil will be more exhausted, aquifers and fresh water supply will dry up. But in a country like India, where half of the children are already malnourished, we need to take adaptive strategies towards malnutrition since climate change will only worsen the problem.

What is the stance of organizations like WHO and World Bank?

The World Bank has primarily been concerned with issues of economic development. It's only now that it has realized that other factors like education and health are equally important for improvement of human condition.

who has been a bit conservative about climate change. This is the first year that it has come out and said that climate change is important, which is a big step forward.