Balakrishna Pisupati was the first biodiversity expert to head India's National Biodiversity Authority (NBA) and had more than six months to go when he resigned earlier this year. His sudden exit from the organisation took many by surprise but his departure was imminent after the parent ministry of NBA, the Union Ministry of Environment and Forests (MoEF), made it abundantly clear that it intended to replace Pisupati. During his stint as chairperson of NBA, Pisupati was often in the news in connection with India’s first biopiracy case, relating to Bt Brinjal. Before taking on this assignment he had been supporting NBA in dealing with implementing the Biological Diversity Act  from the time of its inception. His association of over one decade stoked his interest in India, especially in the context of Access and Benefit Sharing (ABS)  framework and Nagoya Protocol. He decided to leave his job as head of biodiversity, land law and governance programme with the United Nations Environment Programme (UNEP) in Nairobi and relocate to India. In his exclusive interview to Down To Earth after his resignation, Pisupati admits that though NBA is an autonomous body, it has a lot many strings attached to MoEF. He talks to Jyotika Sood about his tenure, challenges before India and what ails India’s biodiversity regulations. Excerpts: 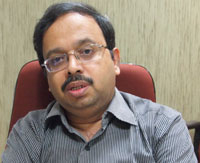 Indian institutions work in a bureaucratic set up and it is said you tried to defy it. Was that the reason for your resignation from the post of chairperson of National Biodiversity Authority (NBA)?

The decisions made, noting on files, actions taken and discussions held will speak for themselves. I just want to say that it is not easy to function when the chief executive of a statutory, autonomous body was constantly being directed by the parent ministry, limiting the ability of timing and nature of decisions made.

My simple question was to ask whether systems and procedures are established to ensure due diligence and improve efficiency or to delay and negate positive action, fearing decision making. I had to make a few decisions in the interest of NBA and they will stand any scrutiny. I believe that as chairperson of NBA my interest is to secure the interests and credibility of NBA and not blindly follow certain precedence set at NBA.

What were the challenges when you took charge?

I had three key challenges. To secure adequate and predictable finance, to get together technical expertise and networks to deliver the mandate of NBA. With this I wanted to bring about awareness about the (Biological Diversity) Act and establish NBA as a truly statutory, autonomous body in the country to deal with issues related to biodiversity.

Are you saying NBA was not functional and autonomous before you joined?

Perhaps for the first time in a decade, NBA was vibrant, visible and responsive. Apart from this, during my tenure, NBA has revised the guidelines for People’s Biodiversity Registers, operationalisation of Biodiversity Management Committees (BMCs), guidelines for establishing the National Biodiversity Fund, operationalisation of Biodiversity Heritage Sites, Access and Benefit Sharing guidelines and others. More than a dozen state biodiversity boards (SBBs) are fully operational with substantive work programmes and BMCs are empowered to deal with implementation of the Act. Therefore, in summary, I feel that I was able to tie several loose ends under the Act, raised both government and external finances for NBA (from about Rs 1 to 2 crore per year to about Rs 50 crore per year) and brought regional and international visibility to NBA.

The seeds I have sown in establishing the Centre for Biodiversity Policy and Law at NBA and the first national Global Environment Facility project on ABS bore fruit during my tenure as chairperson about which I am pleased. I am satisfied that I gave visibility to NBA and the Act in such a manner the stakeholders are confident to work together with us in effective implementation of the Act and the Rules.

NBA now needs autonomy, technical and legal expertise and a good leader who can see the future horizons of linking conservation with development. When I took over as chairperson, I was aware that it is a tenure-based position and was available for a three-year period. I began prioritising issues of consolidating the statutory mandates of NBA under the Act and wanted to focus on issues of inclusive agenda for implementation.

But why did it take so long for NBA to file the biopiracy case in Bt Brinjal?

I will not be able to answer the question on issues before I took charge in NBA. However, once I came on board in August 2011, a series of measures were put in place to consolidate the available information relating to the case and file a complaint. However, since certain procedural issues had to be sorted out internally at NBA, the case was filed in November 2012. Also, I wanted to ensure we have a watertight case with this complaint since the implications need to be assessed with care and confidence.

State Biodiversity Boards (SBBs) and MoEF say you could have done much more. Your comment

This argument that NBA has not done much during my tenure is really strange and unfounded. The achievements made, partnerships established, resources raised and enhanced visibility of the Act speak for themselves. I supervised the establishment of National Biodiversity Grid for biodiversity data and information management, completion and issuance of several guidelines under the Act, and the first economic valuation methodology for ABS. Before I took over, the support to SBBs was very minimal. I strengthened the human resource capacities at NBA and SBBs.

In fact, NBA during my tenure, was the reason that series of international events such as expert meetings for SAARC, ASEAN, Africa and the CBD were held in India. NBA, during the recent months, had the largest number of partners, both in spread and expertise who had contributed to our agenda positively.

ABS rules are one of the major bones of contention between NBA, state biodiversity boards and the MoEF during your tenure. Why?

The issue is now sub judice before the National Green Tribunal bench in Bhopal, so I won’t comment. But I personally feel that the objective and provisions of the Act are not appropriately understood by various sections in deciding on the issues presented, I only wanted to ensure that the spirit of the Act, the Convention and the Nagoya Protocol  are appropriately interpreted in dealing with the issues. Whatever NBA did was based on written, expert legal opinion. My only interest was that India, which holds presidency  for COP, should lead implementation of ABS by example and not emotions.

I did my best in dealing with ABS issues and brought more rationale and predictability to ABS process at NBA, based on the provisions of the Act and rules. I only hope that the future actions on finalising the ABS guidelines are in the true spirit of ABS as it was negotiated at CBD and in India under the Act. I am not sure if it is correct to assume already that there will be dilution.

Is implementation of biodiversity laws are difficult in India?

I do not think it is difficult. The difficulty is to provide both responsibility and authority to individuals and organisations to deliver the mandates. Merely providing huge mandates to organisations with limited elbow room to operate is very unfortunate. Also, I am a firm believer that implementation of Act in India needs partnerships, networks, credibility of the individual and institution to move the agenda in a positive direction and more importantly an attitude to stand by principles and integrity.

The big challenge in India, I find, is that while responsibilities are given they are not commensurate with the authority provided to institutions. Also, the sense of insecurity and feeling that processes decide product need some re-look. Environment and biodiversity are about ensuring a sense of belonging to the people and policy implementation is about having an inclusive, predictable and transparent agenda for the government.

What is your advice to your successors and the Union environment ministry?

Recent developments in India, including the decisions on national development, will have a significant impact in dealing with biodiversity and ecosystems in India in the years to come. As I had discussed with some of the chief ministers of states in India, we now need to demonstrate that development need not compromise our ability to conserve and complexity shall not be an excuse for inaction.

India needs expertise and regional and global links to deliver its agenda as well as learn from others. States need to support the state boards more effectively and provide them with same autonomy that I strove for in NBA. BMCs need to be empowered in a manner that communities see biodiversity agenda as progressive and pervasive.

Lastly, India needs leadership in institutions of people who will not merely push papers but provide platforms for inclusive opportunities using biodiversity and ecosystems as basis for sustainable development in the future. This is possible and should be the agenda for everyone concerned.