K T Jacob, Indian National Academy of Engineeringdistinguished professor at the Indian Institute of Science, Bengaluru, has devised a new type of solid-oxide fuel cell, useful for power generation. The concept, which would result in optimal use of fuel and reduce the cost of power generation, was presented at the Indian Science Congress held at SRM University in Chennai. He explains the technology and its potential to Megha Prakash 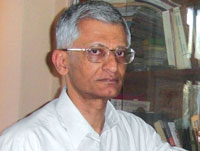 Solid-oxide fuel cell (SOFC) is a device in which hydrocarbons, like methane and diesel, electrochemically combine with air to produce electricity.

Though it is an efficient power generator, it emits considerable amount of heat, which can be used further. Moreover, since a single cell produces just 0.8 volt, several cells have to be connected in series or stacks to generate sufficient voltage, and then in parallel for sufficient current required for applications. Designing this interconnect is an important part of SOFC.

The basic chemistry of the new SOFC is different. Here, a liquid metal, like copper, is used as the anode at temperatures close to 1,100oC. A solid electrolyte, yttria-stabilized zirconia tube, supported by cathode is immersed in it. Fuel in the form of solid carbon particles (coke or coal without sulphur) is fed into liquid copper. Oxygen ions migrate through the electrolyte into liquid copper, where they react with carbon (or, partially oxidise it) to form carbon monoxide (CO) and generate current. Hence, the new SOFC is called the partial- oxidation SOFC.

It can use solid carbon in addition to hydrocarbons as fuel. Its power density is high, 1.7 Watt per sq cm. The CO genereated by the new SOFC can be further used in conventional SOFC or gas turbine, thus increasing the combined efficiency of power generation.

The new SOFC can be considered as the first unit of a two-stage SOFC plant producing 1.5 times the power output of conventional SOFC. Since several cathode- supported electrolyte tubes can be inserted into the copper bath, they are automatically connected in parallel. This partially solves the problem of interconnecting the cells.

The high temperature required by the cell can be obtained by burning about half of the CO produced in an outer combustion chamber surrounding the fuel cell. The new SOFC can also use the heat from the advanced high-temperature nuclear reactors. That way it will produce more power than steam turbines that convert nuclear reactor’s heat into electricity. The new SOFC converts heat to electricity efficiently.

On its commercial viability

The device is in its infancy, though its power output has been verified. The next step is to improve its performance by using an alloy with considerable carbon solubility. Liquid copper has negligible solubility and requires stirring to keep carbon particles suspended in it at the start of operation. Once CO gas evolution starts, the liquid metal is automatically stirred. If the liquid metal/alloy has significant solubility for carbon and oxygen the reaction will occur between dissolved solutes and dispersion of carbon particles would not be required. We also need to develop stronger electrolyte tubes.

Then comes the difficult task of designing a stack, a formidable challenge even for the best engineering companies. The material for constructing the enclosure around the SOFC with good heat transfer characteristics also needs to be developed. It would take about 10 years before the new fuel cell becomes operational. As of now, only the proof of concept has been established.