Until the 1980s, the Mountain Pass mine in California provided most of the rare earth materials to the world before China overtook it. China, until five years ago, accounted for 97 per cent of the world's production of rare earths, used in smart phones, wind turbines and compact fluorescent lamps (CFLs). But in an attempt to reserve the minerals for its own future use, China has been steadily cutting down on exports. In this new scenario, other countries are gearing up to explore their rare earth reserves. Mountain Pass mine, now owned by Molycorp, is also set to start production early next year. Mark Smith, CEO of Molycorp, in an e-mail interview with Dinsa Sachan describes the challenges of producing high-purity rare earth materials. Excerpts: 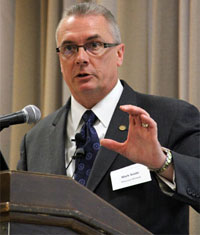 Why is there such a crazy rush for rare earth elements?

Rare earths are a foundational material for much of today's most advanced technologies. Rare earth materials help to reduce weight, emissions, and/or energy consumption, and can provide greater efficiency, performance, minimisation, speed, durability, and thermal stability. Without them, many technologies simply won't function as they do today. Rare earths have already changed the shape of multiple industries, and for the better.

But there aren't many producers of these elements apart from China. Why?

It is not easy to produce high-purity rare earth materials, and there are very few rare earth deposits discovered to date that have the ore grade, size, and metallurgical qualities to make the deposit economically viable. An even greater challenge is understanding how to efficiently process rare earth ore into commercially viable, high-quality rare earth products that can meet increasingly demanding customer specifications. Rare earths are not commodities like tin or copper. They are advanced chemical products that often require custom engineering on a customer-by-customer basis.

A further, critical challenge is producing rare earth materials in an environmentally superior manner, which we believe is a virtual necessity these days.

In a situation where China is imposing embargo on exports, what role is Molycorp set to play in the global rare earth market?

Our growing production at Mountain Pass, coupled with our substantial downstream processing and speciality materials manufacturing capabilities, allows us to produce a wider variety of custom-engineered products, including high-purity rare earth products and magnetic materials. Our resource production also increases the diversity of global rare earth supply, which benefits customers and nations that are concerned about stable and reliable rare earth supplies. If market demand drives us to increase production to our full Phase 2 rate at Mountain Pass, we will be able to supply as much as a third of global demand, assuming that demand is at about 120,000 tonnes. The increased diversity of supply we will provide should help to keep markets more stable and will provide increased purchasing options for rare earth consumers.

The Molycorp website informs that the company will start producing in 2013. Could you throw some light on the catalogue?

Our Molycorp Magnequench subsidiary produces some of the world’s finest neodymium-iron-boron (NdFeB) magnetic powders for use in the manufacture of bonded NdFeB magnets. In addition, construction recently was completed on a sintered NdFeB magnet manufacturing facility in Japan, which is a joint venture between Molycorp, Daido Steel, and Mitsubishi Corporation. Production of those next-generation NdFeB sintered magnets is on schedule to ramp up beginning in January 2013.

India has 3 per cent of world's rare earth resources. Do you plan to have mining operations in India in future?

India has traditionally been a producer of rare earths. If India becomes a significant producer, that will further increase the diversity of global supply, which should be welcomed by rare earth consumers around the globe. I believe that we will see India's internal consumption of rare earth materials continue to increase as its population demands more rare earth-enabled technologies like smartphones, laptop computers, hybrid and electric vehicles, energy efficient lighting and appliances, wind power, and others. Recognizing this potential demand growth, India appears to be taking the necessary steps to increase its own production.

However, we have no plans at present to expand our production operations there, but we do have customers in India, and we look forward to expanding our customer base there as the Indian economy continues to grow and demand for rare earth materials increases as well.