‘Europe will witness more extreme megadroughts in the years ahead’

Down To Earth speaks to climate historian Christian Pfister from the University of Berne about Europe’s tryst with drought this year, in the past and the future 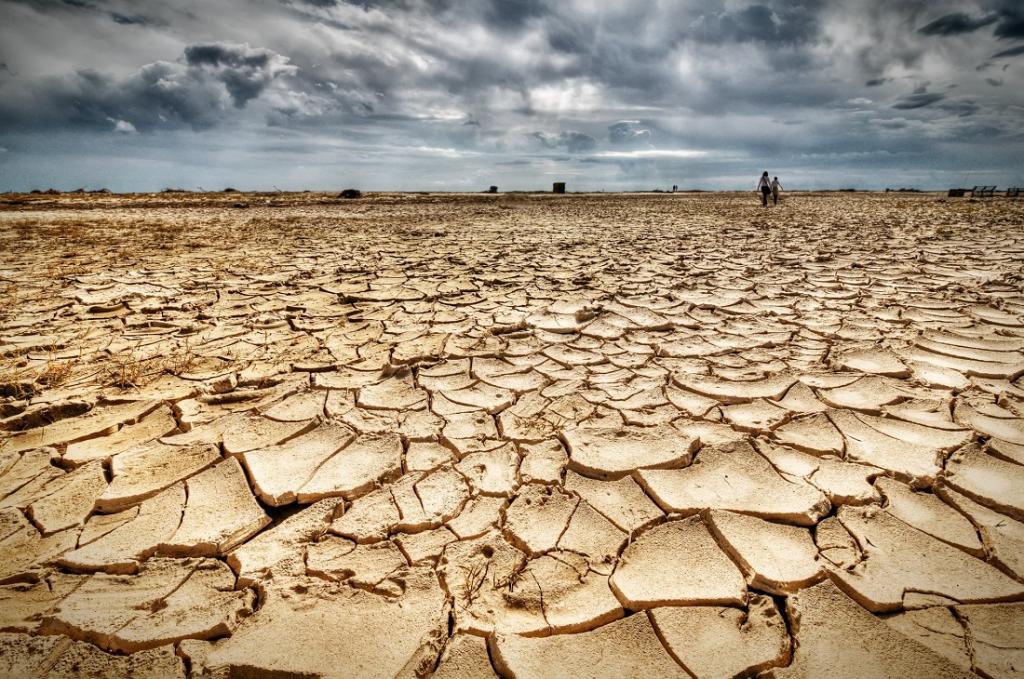 The summer of 2022 has broken all records as far as global warming and human-induced climate change are concerned. Europe is suffering from its worst drought in half a millennium. Its mighty rivers such as the Danube, Po, Rhine, Thames and Loire have dried out.

Christian Pfister is Professor emeritus for Economic, Social and Environmental History at the Oeschger Centre for Climate Research, University of Bern, Switzerland.

Read Down To Earth’s coverage of climate change

He is also the co-author of Climate and Society in Europe: The Last Thousand Years with Heinz Wanner. The richly-illustrated monograph, the English edition of which was released in September last year, was the first time that an environmental historian and a climatologist wrote a book on climate history and its impacts on people together.

It also presented seasonal temperatures for the last millennium and took a fresh look on new population history, considering both climate and pandemics.

Down To Earth spoke to Pfister about how the drought of 2022 compared with the one in 1540. DTE also asked him as to what lay in store for Europe in the years ahead as far as droughts were concerned. Edited excerpts:

Rajat Ghai: What do we know about extreme weather events, especially droughts and wildfires, in Europe prior to 1540 Common Era? 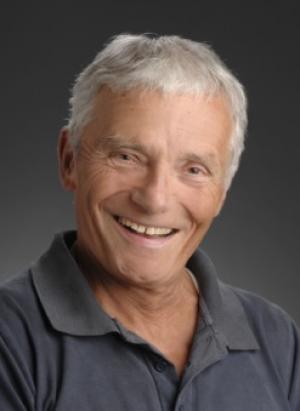 Christian Pfister: We get reliable information on weather events in Europe only from 1170 CE. Prior to that, the messages are much shorter and often not contemporary. They say the summer was so hot that the forest was in flames and that the fish died in the rivers. The drought of 1540 CE is the first event on which we have very detailed information. China scores better than Europe on recording such events prior to 1000 CE.

RG: Describe what happened in 1540 — the meterological, hydrological and agricultural droughts that took place in Europe and why?

CP: The year 1540 was the most extreme manifestation of a circulation pattern that occurred much more frequently in the years before 1700 CE than in the following period until the onset of rapid warming.

This pattern includes about 20 extremely hot and dry summers from 1000 CE through 1990. Most, but not all of them, were initiated by a warm dry spring leading to desiccated soils and early snowmelt at higher altitudes. Just a single such summer occurred between 1720 CE and 1990, that of 1947.

The summer of 1540 was characterised by a quasi-persistent diagonal south-west to north-east oriented blocking ridge of high pressure over continental Europe connected to the Azores High (large subtropical semi-permanent centre of high atmospheric pressure typically found south of the Azores archipelago in the Atlantic Ocean).

There were very high temperatures in both, France and Switzerland from April to July. We can reconstruct it in detail from grape harvest dates. The weather in August and September was also very hot. October to December was sunny and warm, like in April, until the end of the year, without any frost or snow.

The drought is described in some 300 chronicles. Many chronicles reported the dates of the rain spell, how intensively it rained. Like 2022, there were sparse rains. It rained, but did not rain enough. We could estimate the precipitation for France, Switzerland and Poland. It was just a third of the 20th century average.

The cumulative deficit of days with precipitation is to be noted. Such days became rarer. Rivers had a huge discharge deficit. It was 90 per cent below the 20th century average.

Lake Constance, the second-largest lake in western Europe, dropped to an extremely low level in 1540. So much so that the lake floor appeared and people wandered around, looking for Roman coins. In England, the Thames’ flow became so feeble that seawater reached London Bridge and people could drink it.

There was outstanding, persistent severity of heat and drought in July that led to a continent-wide outbreak of devastating fires, north of the Alps.

Temperatures peaked that month, well above 40 degrees Celsius. There were town fires in Germany that were more frequent in 1540 than any period of peace since 1000 CE.

A school teacher in Lucerne, the Swiss town, wrote that the sky was dark of mist and dry smoke. The same observation was made by Marcim Biem, a theologian and president of the Krakow University in Poland. This relates to aerosol elements in the air as was observed in Russia in 2010.

Read Is it climate crisis that fuelled flooding in Pakistan?

RG: What was the effect on the economy of the continent?

On the other hand, the grain and wine harvest were good. It was observed that fish species such as graylings (Thymallus thymallus) in the Rhine, unable to find zones with cool water, were caught by hand belly up in large numbers.

This year probably caused the highest fish mortality in the second half of the millennium. And people were left puzzled by the fish mortality.

RG: How did the fires caused by drought affect European society in 1540?

CP: Climatic extremes and nature-induced disasters are known hotspots of cultural history. The emergency situation of 1540 entailed an emergency within society.

People were shocked because the widespread forest and settlement confrontation involved a loss of control over fire outside people’s experiences and beyond their imagination. Conspiracy theory offered plausible and convincing explanations.

Settlement fires were frequently attributed to arsonist plots allegedly inspired by political opponents and put into effect by paid vagrants and beggars.

In people’s imagination, these groups lived outside of parish structures. They formed a criminal counter-society hidden from the authorities and the public.

In the German Reich, the Schmalkaldian Alliance of Protestants blamed the League of Catholic Princes for setting towns aflame using paid arsonists. This was also discussed at the highest level of the Reichstag. 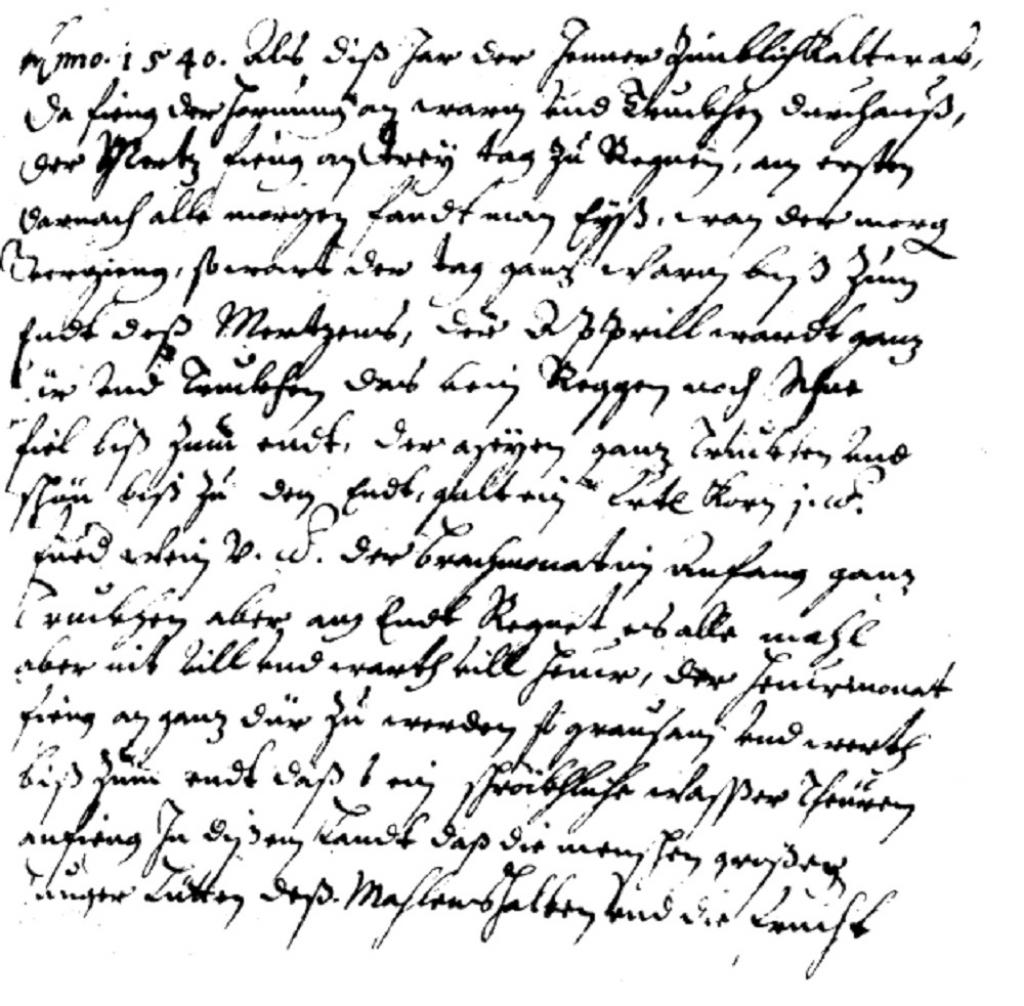 An excerpt from the diary of the vinegrower Hans Stolz describing the meteorological situation in July 1540 in his village Guebwiller, eastern France: “July turned torrid until the end (August 9). A terrible water shortage plagued this country and people became hungry because mills stalled. Fruit on trees, such as pears, apples and walnuts dried out, also grapes on vines. Many cattle died of thirst.” Credit: Christian Pfister

Organised arson was regarded as the most threatening crime of the early modern period, as attacks were not directed towards individuals but aimed at spreading insecurity and chaos within communities and territories, similar to terrorist attacks today.

Arson was blamed only on men. Women were not targeted. But women were branded as ‘witches’.

Heinrich Kramer wrote a book in 1486 which propagated the idea that witches were an occult sect formed and led by the Devil in order to commit horrible crimes against entire countries. They were mostly targeted after harvest failures triggered in most cases by cold, rain, untimely frost and hailstorms.

CP: This spring in Europe was similar to the past. I had warned in interviews on the web and to the press that we might face a disaster. Still, 2022 was not as severe as 1540.

But the summer of 2022 has caused damages worth billions. It has also caused problems for agriculture and the nuclear power industry in Europe. Water is also scarce.

I would say it was not as bad as 1540. But I am sure that over the next decade we will reach more such extremes. This is because people only speak about global mean temperatures.

But what is important for people is these extremes as we see now in Pakistan. And the fires. As mean temperatures rise, there will be more warm extremes that will also be outside the period of instrumental measurement.

RG: Will Europe witness more megadroughts in the future?

CP: Yes. I feel we will witness more megadroughts and more extreme megadroughts than this year. I strongly hope that our authorities will prepare for such extreme events since they can take everyone by surprise.

We have to learn to live with these extremes because they are the worst that humanity can get. I saw what is happening in Pakistan. It is shocking. Also, the fires in Australia and California. It really worries me. I am scared about it.

RG: Were pre-modern and pre-industrial societies better equipped to handle events of such magnitude than us?

CP: Yes. Europe at that time probably had a tenth of the population it has today. The drought sensitivity of crops was lower because yields were much lower. If we want more high-yielding grains, we need more water.

Also, people were used to experiencing epidemics. The continent lost between 40 and 60 per cent of its population to the Black Death.

There were plague outbreaks from time to time, each claiming victims. There were also epidemics of dysentery. So, people had a different attitude towards life and death.

RG: What can the past teach us about the changes in climate today?

CP: The past can tell us what kind of super extremes we can expect. If such information is disseminated among people today, they may perhaps become more sensitive to those extremes.