Eddy Moors, who heads the Earth System Sciences and Climate Change group at Alterra Wageningen University and Research Center in the Netherlands, coordinated a study on the impact of climate change on the Ganga basin. During his recent visit to Delhi, Moors shared the findings of the study and adaptation measures with Indrajit Bose. Excerpts from the conversation 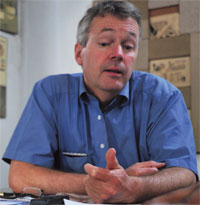 On the state of Himalayan glaciers

Glaciers in the eastern Himalaya, which are usually smaller and at lower altitudes, are shrinking. These are losing more ice than is being replaced by snowfall. Glaciers in the western Himalaya are at higher altitudes and growing. Their growth can be attributed largely to snow accumulation by strong and frequent westerly winds. However, the data coverage is low and no definitive number can be given for the growth or shrinkage of the glaciers. It has become increasingly important to monitor them.

On water availability in Ganga basin

While glaciers are melting, it is not clear whether meltwater runoff continues to increase. This is because water availability is also about when and how much snow falls and melts. In fact, changes in snowfall and melt impact water availability more than the changes in glacier melt. It is projected that as the total precipitation increases due to rising temperatures, snowfall in the Himalaya will decrease by about 30 per cent. In addition, spring melt will occur earlier.

People living downstream, however, won’t be impacted as much by these changes as here monsoon rain is the dominant water source. Changes in the monsoon rain due to temperature rise will impact people. Our regional climate models show a clear trend of rising temperatures in the Ganga basin: 1-2°C by 2050. However, it is not easy to predict when and in which parts of the basin the precipitation changes will be severe because of the large natural variability in rainfall. It will increase in some parts and decrease in the others. More research is needed to reduce uncertainty.

On ways to adapt to extreme events

First, policies are required to increase the capacity of a society to adapt to both anticipated and unanticipated conditions. Any policy measure should factor in that natural variability exists and that it will increase. We are not capable of dealing with natural variability-led events at present, so it becomes important to take into account the future variability and adjust our behaviour accordingly. Consider agriculture. We have dry years and years with lot of rain. Chances are that this variability will increase and at the same time, because of increased population, the amount of water required will go up. Groundwater is a good buffer to overcome drought, but at the moment its levels are dropping. Recharging reservoirs is a good way to safeguard groundwater along with other measures to reduce consumption. No doubt, such measures must be coupled with better weather predictions on daily and seasonal scale, and communicating the predictions to farmers.

Secondly, managing extreme events will get more complex if water resources are not managed in an integrated way, from catchment to supply to consumption. At present, adaptation measures are planned at national and state levels, whereas it is best done at river basin scale.

On difference between climate change and weather variability

Models show extreme events that happened once in 20 years will happen once every two years in future. In a model, including natural variability and anthropogenic influences, one can reproduce historic data. If you take out anthropogenic influences from the model, the results show natural variability would have led to lower temperature and changes in rainfall. Of course, uncertainty remains. Present-day extreme events can be seen as proxies of what may be expected more frequently in future.