Changing wind patterns in India-Pakistan and frequent cyclones in the Indian Ocean due to climate change are creating suitable breeding conditions for locusts, says Keith Cressman, senior locust forecasting officer with the Food and Agriculture Organization 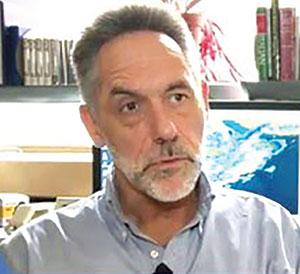 How do you see the swarm attack panning out in India?

It appears that a very long breeding season of locust is finally ending. Its population is declining now. Though a few swarms still remain in western Rajasthan and Gujarat, these are immature and cannot be detected and controlled. India’s Locust Watch Centres need to be alert for the next few weeks.

Is this the first time that locust has stayed in India after October-November?

This has happened for the first time since the 1950s. The decades before this witnessed terrible and long periods of locust plague (when there is a swarm attack for more than two continuous years, it is called plague). This time, they stayed for long because of good monsoon.

In 2019, monsoon started six weeks before time (first week of July) in western India, especially in locust infested areas. It also lasted a month longer — till November, instead of the usual September/October. Extended rains created excellent breeding conditions for the locust, while also producing natural vegetation on which they could feed longer.

Locust came to Jaisalmer in May end. Rajasthan has witnessed three generations of breeding instead of the regular one generation. The first two generations caused a lot of damage to crops. The third generation is weak now.

How big is the number after the third generation?

Locust breeds fast. The first breeding causes a 20-time increase in number; the second a 400-time rise; and the third 16,000 times. The peak infestation this time was in October, at the end of second generation, when large swarms were reported in Rajasthan and Gujarat. Since natural vegetation dried out in December, the swarms got into cultivated areas and caused damage.

Can they return in May-June, or before the monsoon?

It does not matter if they go late or come early. Their children or great-grandchildren will come during the time of their annual migration, at the start of the monsoon. They move to south-west Pakistan, Baluchistan and south-east Iran where they hang out in the winter. They wait for rains as humidity and the resultant warmth creates a conducive environment for their breeding.

If breeding is good, the new swarm formed in May-end could move back to India’s monsoonal areas around June. The difference this year was that south-east Iran received heavy rainfall in January, giving an environment conducive for breeding. So swarms are moving from India and Pakistan to lay eggs there.

This generally happens in March-April, but this time it’s happening in January-February. This means Iran and Pakistan will now have an extra generation of locusts. This also means we will have 20 times more locust than normal.

Does this mean they will come early to India and Pakistan this year and set a new pattern of annual migration?

I don’t think so. It is not going to happen every year. Their seasonal migration depends on the rainfall patterns in Iran. Locust swarms are usually carried to India and Pakistan by the monsoon winds. If these are normal then their migration pattern will not change.

Do you think frequent changes in wind patterns are causing an increase in the frequency of locust attacks?

Yes. Wind patterns are changing over India and Pakistan. Because of climate change in the Indian Ocean, there are more cyclones. The frequency of cyclones has increased. Usually, there was a cyclone every five to six years, but in the past three years there have been three cyclones each year.

Africa, too, witnessed one of its worst locust attacks last year.

It is linked to the attack in India and Pakistan. It started in mid-2018 when the desert region of Saudi Arabia received heavy rainfall due to a cyclone. There was another cyclone in November, followed by rains in the Red Sea coast region. These nine months of breeding produced an enormous number of locusts.

Some of them moved north, to Iran, and from there came for spring breeding in India and Pakistan. Other swarms moved south, to Yemen, and in summer, crossed the sea to reach Somalia, to the Horn of Africa.