Agriculture scientist Preeti Joshi  has the recipe for the perfect compost and has been promoting it in Wardha district of Maharashtra for 20 years. She tells Aparna Pallavi why farmers fail to use it despite their eagerness to do so. Excerpts: 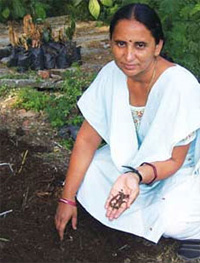 On factors that dissuade farmers

On where farmers go wrong

Most make the mistake of spreading fresh dung on their land. This is problematic because wind-borne seeds get stuck in the moist dung and encourage weed growth. I have seen farms getting covered with weeds they never had in a single crop season. It takes several crop seasons to undo the damage and increases weeding cost. Even farmers who allow the dung to decompose are not aware of the duration and temperature cycles. They end up spreading semi-composted dung that contains pathogens, like Fusarium, Phytopthora and Rhizoctonia, and weed seeds.

Preparing compost takes about 90 days. Initially, the temperature of the dung rises up to 60°C; the pathogens get killed at this temperature. It starts falling after 30 days and reaches 30-35°C in 60-90 days. Weed seeds in dung decompose during this period. The heap should be two-three feet high and overturned every 30 days. But farmers often make 10-feet heaps for lack of space. This extends maturation period and requires more labour for overturning the heap.

Even though the raw materials for compost such as water, dung and biomass come free, they have to be brought to one place, which should be shaded to prevent the compost from drying. This involves considerable transport and labour costs. For instance, cow dung is usually available in the cattle sheds and the biomass is available in the farms. Depending on the distance, which could vary from two to 10 km, a farmer spends at least Rs 4 to prepare a kilogramme of compost. Since an acre (0.4 ha) requires about two tonnes of compost, the farmer has to spend Rs 8,000. This is why most prefer synthetic fertilizers, which work out cheaper (about Rs 700 an acre) and are less taxing.

From my 22 years of work experience with farmers in Wardha, I can say that most farmers are not in a position to prepare their own compost due to labour and infrastructure problems.

I had tried the collective approach. With the help of social activists, I had encouraged self-help and youth groups to start composting centres in their villages where farmers can get their raw material processed for a charge, just like flour mills. But the approach did not work because setting up a composting centre is expensive: it requires space, sheds and regular water supply. The groups did not want to take loans because the cash return seemed paltry.

The solution lies in subsidizing such initiatives. The government should help set up composting centres, provide fully subsidized infrastructure and bear the administrative expenses of the units for at least five years. The subsidies would be passed on to farmers in the form of low processing charges. Once farmers start using the compost regularly and reap the benefits, they would be willing to pay more. But the gestation period is necessary for the self-sustenance of such units and to promote compost.