“Cooperative is not for profit but for benefit”

Arshad Ajmal, mentor and the first chairperson of Al-khair Co-operative Credit Society Ltd, is now working on replicating the model in different parts of the country. He talks to Jitendra about the challenges and achievements of the unique banking initiative 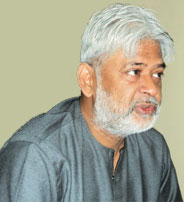 Traditionally, banks give a reward to its depositors, which your cooperative does not. How does that work? Also, how is your model different from conventional Islamic banks?

Al-khair is not a bank but a cooperative credit society, which means it is a member-owned, democratically-governed autonomous institution. It is a cooperative credit society created by the members for pooling their funds and creating a loanable corpus which will address their liquidity demands from time to time. All its members share the cost, profits and risks of the operations. So, we do not have depositors but only members.

In the Al-khair model, loans are provided free of interest after charging the one-time administration cost, which is not a profit. The profit comes from other instruments, such as growth funds, where members deposit money which is invested in other projects. The profit earned through such instruments is divided among the members.

Similar attempts have been made in the past, but they were more like clubs and not cooperatives, hence could not be self-sustained. Two such important efforts were carried out in Mumbai. They were Baitun-Nasr Urban Cooperative Credit Society and All India Council of Muslim Economic Upliftment Ltd.

The primary difference between an Islamic bank and Al-khair is that the former is more like an investors’ club and the latter is a cooperative credit society for the marginalised class.

Al-khair was started by men who were committed to social cause and not by men with financial prudence. Don’t you think this cooperative is only redefining philanthropy as it has mobilised grants from welfare organisations to meet infrastructural and other costs?

You are right that Al-khair was started by people with social commitment. But grants and donations constitute only 10 to 13 per cent of the total income, which is not much.

There can be two ways to make the model financially viable: it is supported by funds from government or companies involved in corporate social responsibility; or we increase our scale of operations to make profits.

The decision-making body of the organisation lacks participation from some communities and gender. Do you feel this will create hindrances in achieving its socio-economic objectives in future?

But all sections are not represented in the board of members. Al-khair should look into this.