Darfur pays for its water

In 2006, Slovenian president Janez Drnov?ek sent filmmaker and political activist Tomo Kriznar as a peace envoy to war-torn Darfur. US pressure cut the mission short . But Kriznar stayed on, uncovering an environmental aspect to the crisis. He talked to Pradip Saha about this lesser known aspect of the war. Edited excerpts: 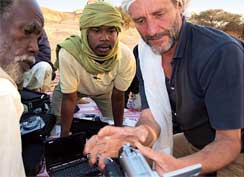 What is the water angle in the Darfur crisis?

The conflict over water between Darfurian African farmers and Arab nomadic pastoralists began as a consequence of climatic changes, and was then exploited by big companies to control the Sudanese oil. We usually see Darfur as a desert covered by refugee camps waiting for aid. But you can see in my film Darfur: War for Water that Darfur has huge mountains of Jebel Mara (3,100 metres high). Jebel Mara is an extinct volcanic crater filled with water, rivers, waterfalls, green fields and forests.This is where Furs live. Darfur is an Arabic word meaning home of the Furs. The Furs sit on the biggest water reserve between the Nile and the Niger: the Jebel Mara has underground lakes of potable water, which can take away the thirst of the entire Sahel. But the water is also cause of the biggest trouble. Other Sudanese tribes escaping the advance of the Sahara are driving the Furs into becoming refugees.

Have you observed the changes?

I travelled throughout Darfur in 1979. When I returned in 2006, I saw a lot of changes. In 1979 there were oases and idyllic villages. I saw Darfurians living happily with their animals. Today there are just empty houses and streets. Many of the houses are destroyed. Lower Darfur is definitely affected by drought. This is not knowledge gleaned from books or from American propaganda. I can prove it with photographs from my two visits.

I have seen how the Sudanese government has manipulated indigenous people. There was a 21-year-long war in Sudan beginning in the early 1980s. Five million people were killed. The war then spread to the Nuba mountains in Darfur. The Arab people were already moving towards Darfur because the Sahara was expanding, the push intensified because oil pipelines were built by the Chinese in the 1980s. The government used the rift between Arab nomads and African agriculturists. They gave the Arab nomads money and guns to drive the African agriculturists away. The Chinese and Americans messed up the situation. China is supporting the Sudanese government and Americans are supporting one of the factions of the Darfurians: the Sudan Liberation Army. They are giving them guns through Libya. The Americans had a contract with the Libyan supremo Muammar-al-Gaddafi which led to guns being transported to Darfurians.

The efforts of activists have put some check on the violence. But there are about two million people in refugee camps in Darfur and Chad.

The solution is to stop the Northern Africans from moving to Darfur. The solution is to have machines to drill out water in areas where the desert is expanding. One drilling machine costs US $150,000. The other solution is to highlight the plight of the Furs internationally through the media and other communication agencies.

What is the Sudanese peoples perception of the crisis?

The people do know that the lifestyle of Western countries is behind climate change. They know there are links between emissions in industrial economies and declining rainfall in the Sahara. So there is hatred against Europeans because we are close to Sudan. Not so much against China and America, the two superpowers actually involved in the war. They are too far away.

As the desert is expanding, where are the Darfurians going and where will they go in future?

Europe. They are moving to Italy through Libya. The Italian prime minister Silvio Berlusconi now has this deal with Gaddafi which allows Libyan soldiers to hunt refugees and keep them in concentration camps where the rich can pay their way out. Those who have no money are punished, their women are abused and children are taken as slaves. Berlusconi got money from the European Union to create these camps with Gaddafi. This is how Europe solved the problem of Fur refugees.

Roughly, how many people have moved?

I am not sure if anybody has the correct numbers. But three-four million of Darfurs population of six million have been affected. About a million people have been killed and more than two million people are in refugee camps in Chad and Sudan.